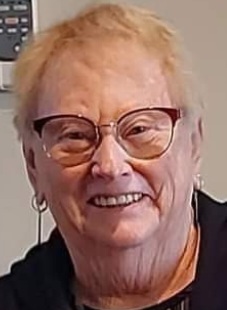 Barbara Maisy was born on Wednesday, April 29, 1942, in Hamilton to parents Percy and Emily (Heinmiller) Ferguson. Barb’s parents were young, and unfortunately went their separate ways, whereby Barb remained with her mom. After spending a short period of time in the Gorrie area, Barb and her mom relocated to Arran Township, where Emily remarried, marrying Norm Beatty, who Barb called “Doc”. The Beatty family had a mixed farm operation on Lot 14, Concession 9 of Arran Township. Barb was soon joined by younger sister Catherine “Joanne” in 1952. Barb attended S.S. #6 school in Arran Township. Barb had many fond memories from her childhood of her adventures at Arran Lake with her friends and summers spent with her Aunt Ruth in Southampton and Chesley at the Krugs. Barb attended high school in Chesley.

One day, while biking, Barb was noticed by a young man four years her senior, William Earl Trelford. Apparently, she knocked the socks off of Earl as they got married a short time later. The Trelford family settled on Lot 27, Concession 6 where they operated a dairy farm. They welcomed their daughter, Carole in 1958 and son Doug in 1960, with the family being made complete in 1968 with the arrival of Bill.

In 1974, the Trelfords built a cottage at Arran Lake. Here, the family made many memories, and Barb enjoyed spending free time out in the water, swimming, boating and water skiing. In 1977, Earl and Barb built a new home on the back of their farm, becoming residents of the 4th of Arran. It was around this time that Barb obtained her B license and started driving a bus, taking on a route around Tara. Unfortunately, shortly after, her marriage dissolved and her and Earl went their separate ways.

In 1980, Barb reconnected with a man from her youth in the name of Roy Douglas Angel. Soon after, they began dating and eventually moved in together the following year. Their families blended, and they never looked back, formally marrying on Saturday, March 17, 1990. The newlyweds soon called Tara home, and Barb worked alongside Roy in the transport office handling all the secretarial and dispatch duties. I am told she was not one to fool around with, as she always had her fingers in the pot. It was either Barb’s way or the highway… literally! All joking aside, she was extremely organized and particular and helped keep everyone on task. Although much of her time was spent in the office, Barb also obtained her ABZ license and co-piloted the occasional trip with Roy, always enjoying her time in the big rigs. Her aspiration for driving big vehicles even earned her the title of “Grandma BZ” with a few of her grandchildren. In later years, she worked for Maxwell Farms for a couple of years, before settling into her retirement.

Barb had many pastimes, which included sewing, quilting, cross-stitching, and ceramics. She was a fabulous cook and was known for her killer apple pie. Barb enjoyed playing games, particularly Scrabble and a good game of cards. She was an avid swimmer, loved the water, and also enjoyed spending time in a canoe or kayak. Camping was another favourite pastime, and countless memories and stories (some not repeatable) were made with family and friends. Great times were had at Bluewater Lakes, near Crawford, as well as during their time as snowbirds in Florida. No day was complete without sitting around the campfire and sharing stories. These story times rarely occurred without a drink, with beer or a nice glass of Bacardi Rum being a couple of Barb’s favourites. Barb thrived around people and was noticeably in her element when around others. She loved meeting new people and always made those around her feel comfortable. Barb loved to travel, not only in the truck and south to Florida, but to the Caribbean as well. Her visit to Graceland was a dream come true for her. She loved the sun…. even though with her fair complexion the sun didn’t love her back!  Many memories were made during these adventures, including the time in the Dominican when Barb had a life jacket malfunction with much of her family present… The story is best told by them, so just ask, but needless to say they were laughing with Barb, not at her, when it was all over. When it came to television, Barb loved her soaps, with Days of Our Lives being a staple. She was also fond of movies, but I am told there could be NO violence! Barb loved music and could often be found dancing or singing to a variety of tunes. The likes of Elvis Presley, Charley Pride, Reba McEntire, Hank Snow, were just a couple of her favourites… and she was never afraid to sing along with them… even performing karaoke!

Barb was a vibrant, loveable woman, who was a little set in her ways… LOL! She loved her family dearly and instilled in her children early on that they must be respectful and pull their weight in this world. In more recent years, Barb thoroughly enjoyed spending time with her grandchildren and great-grandchildren, and always looked forward to updates on the most recent happenings in their lives. When not surrounded by family, Barb could always be found with a beloved K-9 at her side. Although there were several through the years, her poodle mixes, Buddy and Teddy were favourites of Barb. There was always enough love to go around for everyone.

Although advanced age brought its challenges, Barb remained active in all her social circles and kept her finger on the pulse of everything. She had so much more to give, making her sudden passing even more difficult news to bear. Barb died suddenly, at home, on Thursday, October 6, 2022, at the age of 80.

An informal, come and go celebration of Barb’s life will be held at the Tara Legion on Saturday, October 29, 2022, from 2 – 4 p.m. Private family inurnment in Hillcrest Cemetery, Tara.

Barb loved animals, particularly her four-legged companion Teddy. With this in mind, please consider making a memorial contribution to a local charity that supports animal welfare. Barb would approve!