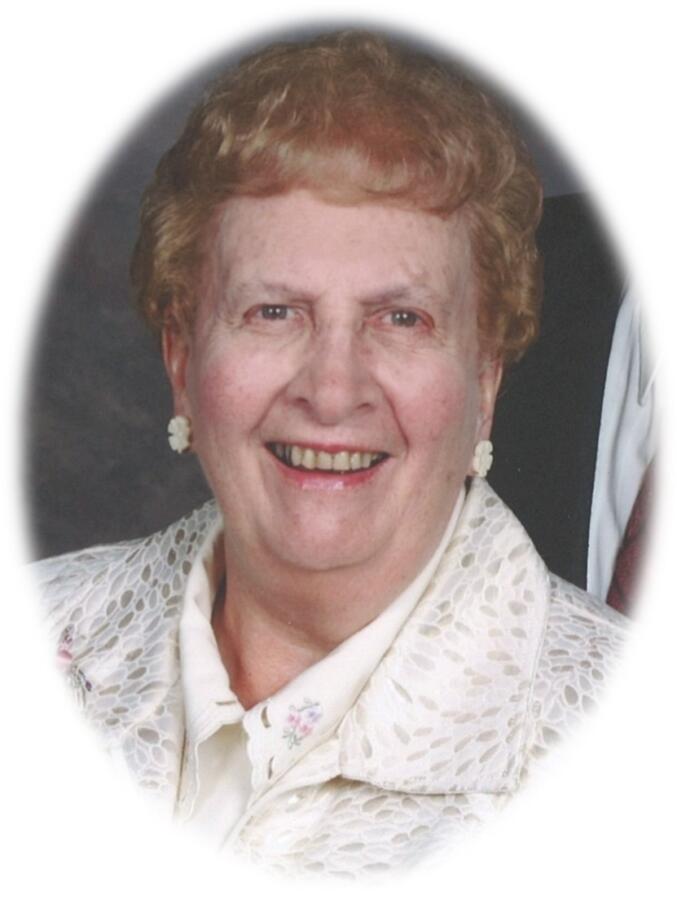 Janet “Barbara” was born in Victoria, British Columbia on Monday, September 23, 1935. She was her mother, Elvira Lustig’s, pride, and joy. As a single mother, Elvira, received a great deal of support from family and friends in raising Barb. At the top of that list was Barb’s aunt, Lydia Lustig, who was also a nurse. Through the years, Barb and Lydia created quite the bond and were always there to support one another. In time, Elvira married Esplen Thomson, and their families became one, meaning instance siblings for Barb. The family resided on the Grey-Bruce line north of Chesley, where Barb attended school on the 6th of Elderslie. She went on to attend high school in Chesley before finding work as an operator for Bell following school.

As a young girl, Barb was first introduced to a boy four years her senior by the name of Louie Frederick Albright. Barb’s mom and aunt bought cattle from Louie’s dad and later Louie worked for Barb’s stepfather. As teenagers, they began dating and were married by The Rev. Messerschmidt on Thursday, May 20, 1954, at St. John’s Lutheran Church (now Faith Lutheran). Once married, the Albrights settled on a farm on the 4th of Sullivan, near Dornoch, where their family began to grow. Janet was born in 1954, followed by Nancy (1957), John (1958) and Bruce (1959). As you can expect, four children in five years kept Barb busy, to say the least. In the late 1960’s the family moved to the 12th of Sullivan, calling it home. It was right around this time that Barb returned to the workforce as the kids had all left for school. She took a job with the Owen Sound Sun Times whereby she worked in the advertising department, selling want ads. After approximately a ten-year stint, Barb moved on to telemarketing before selling Avon and Rawleigh products. In later years, she often helped with a variety of government surveys to keep her busy.

When she found time for herself, Barb had several passions. She loved anything flowers and spent countless hours tending to her flowerbeds around the farm. If asked, her Dahlias and roses were probably her favourites. She was talented with a needle, sewing needle that is, and made most of the kids’ clothing throughout their childhood. She also did some custom sewing on the side, which included acting as Alfie Fromager’s personal tailor. To say Barb was a talented seamstress would be an understatement. Together, with Louie, the couple loved to dance, and were regulars at the weekly dances throughout the area. In fact, Barb pushed for Louie to get a knee repaired just so they could continue to dance… and he did! Barb also loved testing herself and her knowledge with crossword puzzles. She pushed herself, and never liked to leave one incomplete. Barb was also a collector. Like most from her generation, she never liked to throw things away, however, she took a particular fondness for stamps and steins, amassing quite the collection through the years. Once finally retired, Barb and Louie took to the air for the first time and flew to see the Grand Canyon. Other adventures took them to the likes of Newfoundland, Prince Edward Island, and British Columbia. On their 50th wedding anniversary, they treated themselves to a tour of Alaska.

Barb was a loving, cheery woman, who always enjoyed a good laugh. On occasion she wasn’t doing the laughing though… just ask the kids about the elevator ride down the hill through the garden or the family’s billy goat chasing Barb through the house! Honestly though, it didn’t take much to put a smile on Barb’s face.

As the pace of life slowed down for Barb, she enjoyed spending more time reading, especially publications exploring anything history related, or following her beloved Blue Jays or Maple Leafs. They eventually moved into Chesley and settled into their new home. Boy, their cat, joined them in town and was a constant companion. His presence became even more important to Barb after Louie’s sudden passing at home in 2015. Unfortunately, in recent years her health and eyesight worsened, but with the support of friends and family, she was able to remain independent and live on her own until last year. In the last several months, she called Gateway Haven in Wiarton home, whereby she and her family, appreciated the extra support offered to Barb. She passed away on Monday, August 22, 2022, in her 87th year.

Loving mother of Janet (Wayne) Connelly of Port Elgin, Nancy (Craig) Maluske of Georgian Bluffs and John (Nena Ampo) of Dobbinton. Barb will be sadly missed by her many grandchildren and great-grandchildren. She will be fondly remembered by her sister-in-law Marie (Ronald) Swigger and brothers-in-law Allan (Mary Lou) Albright and Wayne Maluskie. Barb was predeceased by her husband Louie (2015) and her son Bruce.

Memorial donations to Faith Lutheran Church would be appreciated as expressions of sympathy.