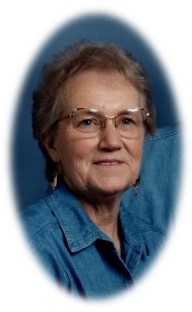 Barbara Leone was born on April 13, 1936, to parents Fredrick and Henrietta “Reta” (McKay) Hagedorn. She joined older brother Wilfred (1934) and resided on the family farm on Concession 8 in Elderslie Township. Sadly, Wilfred died in 1945, at the young age of 11, and Barb was left with the void of losing her only sibling. She went on to attend school nearby at Gillies Hill before attending high school in Chesley.

In 1952, Barb met and married Harry Pegelo. Sadly, their first daughter Patsy (1953) died at the age of three months, but others soon followed with the arrival of Kathryn in 1954, Ken (1955) and Rick (1957). Barb and Harry soon went their separate ways. In time she was blessed to be introduced to a man by the name of Robert Beverley “Bev” Carnahan.  Together they welcomed three more children, Ruth (1959), Susan (1961) and Bev (1962). Now life in the Carnahan house was busy, to say the least with Barb having six children, ages 8 and under. Yikes! Barb was an excellent mother though and put the needs of her kids and her family first. In 1967, the Carnahans relocated to Guelph, following Bev’s work. Barb and Bev formally married at a ceremony in Guelph in 1972. With the kids now all in school, she entered the workforce and began working for Omark in Guelph.

In the mid 1970’s the family returned to Grey Bruce to be near Bev’s roots, settling in Kemble township near Francis Lake. Once settled, Barb took a job opportunity at RBW in Owen Sound where she remained until her retirement in 1991 at the age of 55. Around that time, they severed a lot off the farm, where they built a new home. Once Barb and Bev were both retired, they were able to enjoy more time with family, particularly the grandchildren and friends. Barb took great pride in her new home entertaining often: many a card game was played around their kitchen table.

In 1999, Barb and Bev made their final move, this time returning to Barb’s roots in Chesley. Barb was always one to remain active and quickly became involved with the local Women’s Institute, and the Chesley branch of the Royal Canadian Legion. Barb’s faith also played an important role in her life and she was an active member of St. John’s United Church in Chesley. In addition to attending regularly, Barb was always volunteering her time and talents wherever she could help out, not only at church but throughout her community.

When time allowed for it, Barb enjoyed quilting, knitting, gardening, refinishing furniture and dancing. She and Bev also liked to camp. They belonged to the “Twin C’s” and continued to upgrade their camper through the years. Their adventures took them all over Ontario, out West, out East, and to much of the States. In later years, Barb and Bev often called Citrus Hill RV Resort, Dade City, Florida home for the winter months. When not busy traveling Barb enjoyed working with their Standardbred horses and attending a variety of horse shows. When not outdoors, she was busy in the kitchen often canning and baking. I am told her family’s favorites included Barb’s pies, particularly pumpkin, apple, and mincemeat, and her Christmas pudding.

Sadly, Bev died in 2002, and Barb was left to live-on without him, and that she did with the support of family and friends. In the years that followed Barb remained busy, always paying kindness forward and helping wherever she could. As her kids all said, “If you called mom and needed something, she was always there. She would drop what she was doing and come right away.” Barb was a strong, out-going woman who wasn’t afraid to put in the hard work. Her mothering nature was always present and she was always quick to forgive others. She enjoyed entertaining family and friends, sitting down with a good romance novel, or just relaxing and enjoyed a nice glass of wine… or maybe two! 🙂 However, all joking aside, Barb’s family was her world and she in turn was their rock. Her life and legacy will now live on in the hearts, minds, and stories of the generations that follow her.

In recent months, Barb’s health began to decline and she passed away at South Bruce Grey Health Centre, Chesley on Sunday, December 27, 2020 in her 85th year.

A celebration of Barb’s life will be held at a later date, when it is safe to do so, with inurnment to follow in Mount Pleasant Cemetery, Georgian Bluffs.

Memorial donations to The Kidney Foundation of Canada or Heart & Stroke Foundation would be appreciated as expressions of sympathy.

O Kathy ,
My sincere sympathy on loss of your mom in these hard times of Covid…funerals look so different as are the wakes. I miss giving you a good strong hug. Please accept a virtual one.
We met Barb first at the Lawn bowling Club when she & Bev checked that off their bucket list. Later, our kids delivered flyers and found that they lived in our sub-division! Always liked to see her dog. So friendly.
Barb was a wonderful person through and thru….you will miss her.
God’s peace to all of you.
the Schuknechts

I would like to express my sympathy to the family. It was a great honour to meet (through the sewing group at St John’s)and call Barb a friend she was a wonderful kind and generous lady.

We are deeply saddened for your loss. Our condolences.

Barb was a wonderful neighbour to us and she will be missed very much. Our thoughts are with her family at this difficult time. ❤️

Ruth and Randy and entire Carnahan Family. Condolences on the loss of your Mother. Sincerely Bill and Patti Koeslag

Aunt Barb was one of a kind, she always had time to look out for others and took care of her nephews and nieces as if they were her own kids. Fond memories of Aunt Barb through the years. Our condolences to the entire family.

Ruth, Sue, Bev and families. So saddened to hear of the passing of your Mom. What a pleasure it was to have worked with Barb at RBW. She always met you with the kindest smile. May those special memories you hold in your hearts help you through today and those to come.

Condolences to the Moore and Abell families….Sorry for your loss of a lovely lady Barb…
Sincerely Leeann and Larry Barfoot

Deepest Sympathy to the family of Barbs. She was a very kind person. I’m glad I had known her.

Rick , Ruthie Susie and Bev My deepest sympathy to all of you and your families. Aunt Barb was all of the above. I have heard many of the same words from her nephews and nieces since her passing .She mothered us all on those wonderful days on the farm. As one nephew wrote “ She was one of the good ones”. . This obituary was beautifully written just as she was a beautiful person. She is going to be missed. Hugs to all of you.
Laurie

Ruth & Randy, Susan and Rick and families:
Thinking of you as we read of the passing your your Mom.

So sorry for your Loss. I only knew Barb for the past couple of years as part of the quilting group at the church. She always had a smile and a story to share. She will be missed.

So Sorry to hear of Barb’s passing Rick and Debbie. I know she was a special woman and will be missed by many! Sending Virtual hugs and prayers your way.

Rick and Deb, Please extend our Deepest Sympathy to all of the members of your Family as you mourn the loss of your mother.

Sue and I and family are very sad to hear of your loss. She was a great lady.

Barb was a lovely person. She was a faithful member of St. John’s United Church and an active member of the UCW. She helped with many church dinners, catering jobs and Sunday morning coffee and muffins and after church lunches, always with a smile and a tea towel in hand. Our deepest sympathy to her family. We will all miss her.

Our sympathy to Kathryn, Rick, Debbie and the rest of the family. Our thoughts and prayers are with you.

Rick, Deb & your entire family,
Sincere condolences in your loss. Keeping you in our thoughts.

My sincere condolences to all of Barb’s family. She talked often about her family which she dearly loved. I got to know Barb as a fellow member of St. John’s United Church. She was a kind and lovely person, always willing to contribute. We enjoyed the fresh muffins she brought to coffee-time. Rest in peace, Barb. We will cherish our memories.

Rick and Debbie
It’s so hard to lose a parent; however, you will have some fantastic memories of Barb to help you through this difficult time. She was a wonderful friend as well as a caring person.

My condolences to the entire family. Barbs mom and my Mom were sisters. She will be missed .

Barb was a very caring person. She will be deeply missed. Our condolence to the family.

Our deepest sympathy to the whole family. She was a great lady and will be dearly missed

My deepest sympathy to Barb’s family. It was always a pleasure to visit with Barb at Louise WI meetings. She was always ready to lend a helping hand with our group. She will be missed. “Wherever a beautiful soul has been, there is a trail of beautiful memories.” Hugs.

My deepest . We have been friends for 63 years, She will be truly missed

So sorry for your loss Rick, Debbie and family. Barb was a great lady.

So sorry for your loss! Barb was a nice neighbour we will definitely miss!

May you RIP, such a loving person, she will be greatly missed.

Barb was such a dear, sweet, lady who will be greatly missed. We all loved her in our weekly sewing group…she was a treasure. My sincere condolences to the family.

Ruth and Randy, We are so sorry to hear of your loss, at this diffucult time. I didn’t know your Mom, but was told she was a very caring person and was always there to help anyone in need. Thinking about you.