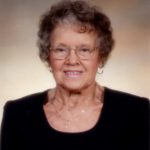 Betty Joyce was born on January 17, 1924 in London, England to parents George and Elizabeth (Burgess) Smedley. In 1928, Betty was joined by her younger brother, Lawrence “Larry”. While growing up in England, Betty spent a lot of time with her maternal grandmother, becoming very close. She left school in 1939, in the midst of World War II, and went to work in a local factory as a machinist. It was during this time that Betty met a young man by the name of William James “Jim” Strong, on a blind date. After a short courtship, the young couple were married August 4, 1945.

Unfortunately, Jim had to return home on a military ship in the fall of 1945. Betty remained behind in England and welcomed daughter Ann in April of 1946, before the girls followed Jim to Canada. In October of 1946, Betty and Ann boarded the Queen Mary and set out on the grueling three-week journey, however, Betty was excited to experience a new life and adventure in Canada. The girls eventually arrived in Halifax, before taking the train to Toronto, where Jim met up with them. Betty was certainly not the only War Bride but she was the only one of her family that immigrated to Canada.

Being a war bride, with a young child, in a new country was a lot of change all at once for Betty. The young family moved in with Jim’s parents in Arkwright. The twins, Jean and Jim, were born in 1947. Betty kept busy caring for her young family. In time, the Strong family moved to Toronto for a few years before returning to Chesley in 1953. John completed the family when he arrived in September of 1958. The Strongs rented for a period of time before buying their first home in the early 1960’s. It was around this time that Betty began working outside the home, taking a position in the finishing department at Heirloom. Her family, however, was her top priority and she returned home after a few years to support her husband and growing family.

Betty’s faith played an important part in her life and she was an active member of Trinity Anglican Church in Chesley. She also found that nature offered her spiritual renewal and loved to go for walks, particularly at Saugeen Bluffs. Although not big on travelling, Betty and Jim returned to England twice, once in 1979 and again in 1995, visiting family and friends. She and Jim also spent a couple of enjoyable winters (85/86) in Mesa, Arizona. Betty also loved her animals, with many four-legged K9’s keeping her company at home through the years. She loved Autumn, not only for the colours but also because she did not like the heat. Her favourite colours were pink and green and she loved listening to classical or Big Band music. Betty was also an avid reader, enjoying any science fiction or thriller she could get her hands on. Stephen King was her favourite author and it, therefore, should not come as a surprise that she also loved horror movies!

In her limited free time, Betty loved to sew and knit. She was extremely gifted with her needlework and made most of the clothing for her family. She also enjoyed being creative and took great pride in making (from scratch) most of the kids Halloween costumes through the years. Betty and Jim loved to dance, and spent many nights hand-in-hand enjoying each other’s company. It should be no surprise that Betty was also extremely talented in the kitchen. In addition to being a fabulous cook, she was probably best known for her baking. The family favourite was hands-down mom’s Xmas pudding. When it came to her favourite meal, Betty loved to eat fresh fish. Those of you who knew Betty, will also remember that she was renowned for keeping a clean house. It could easily be said that she cleaned obsessively, to the extreme, whereby she would make chalk marks on the wall to mark where she left off. Remember, your house can never be too clean! 🙂

In 2008, Jim’s health was in decline and he soon called Parkview Manor home. Betty then downsized the following year, moving into an apartment on Old School Rd., selling the house in the spring of 2010. Sadly, Jim died later that year and Betty was further supported by her family and close friends. She absolutely loved spending time with her grand and great-grandchildren and was always excited to hear about the happenings in their lives. She was a very proud grandmother and always wanted the best for her family. Unfortunately, Betty’s health declined further in recent years and she moved to Hanover in 2016 for additional care. Betty passed away with family by her side, at Hanover Care Centre on Friday, October 2, 2020 in her 97th year.

A private memorial service celebrating Betty’s life will be held at Hillcrest Cemetery, Tara with inurnment to follow.

Memorial donations to the Humane Society of Canada would be appreciated as expressions of sympathy.

Deepest sympathy to the Strong family.

I’m so sorry to hear about Betty. She meant the world to me. Havent seen her since all this Covid 19
Put a damper on my visits with her. She always new who I was every single time. Loved hearing her stories she had many. She was such a spitfire no one could pull the wool over her eyes. I will treasure the memories of Betty and I and all the time we spent together. She was truly like my second mom. Jim Meryl Anne John Cathy Jean and Paul hugs to you all.

Sorry to hear of your moms passing. Cherish the memories.

Thinking of all of you at this difficult time. Hang on to all your good memories! Sincere sympathy!

I am so sorry to hear of Betty’s passing. I have so many great memories of her. My deepest sympathy.