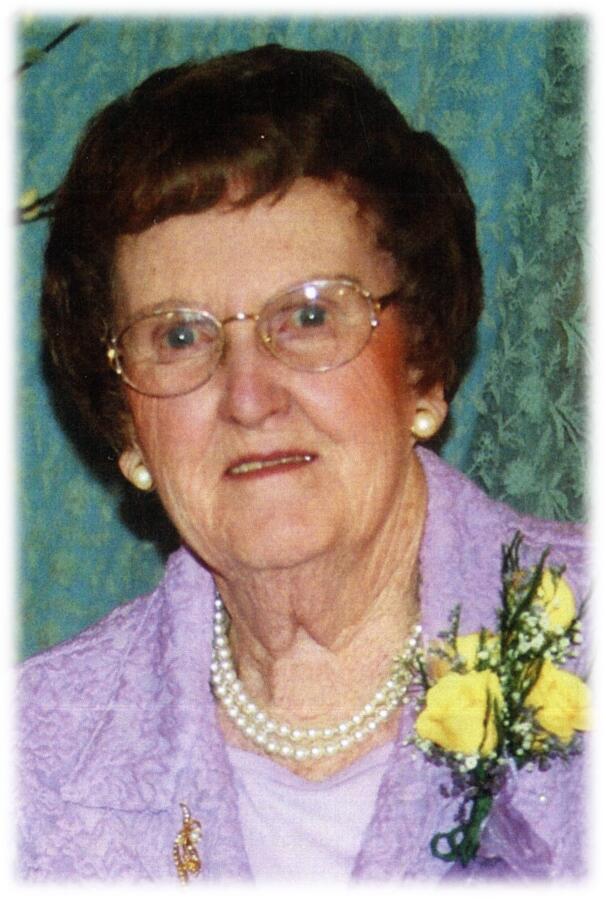 Blanche Willis was born at home, on the 10th of Elderslie, on Wednesday, March 7, 1923. She was the second oldest child of Charles John and Hazel Blanche (Davis) Calhoun’s children and was welcomed by older sister Joy (1918). The Calhouns operated a mixed farm, and the girls were soon joined by younger siblings Willard (1926), Donna (1937), Ronald (1938), and Leonard (1945). The children attended S.S. #11, west of the farm, however, given the times Blanche did not go on to attend high school.

As one of the oldest, Blanche was tasked with many chores around the farm. Stories were told of her raking hay with the horses and regularly milking cows by hand. In addition to helping at home, Blanche spent some time working at the Dobbinton General Store, as well as helping a variety of neighbours with numerous tasks including baking, cooking, housecleaning, and childcare.

As a teenager, Blanche often accompanied her dad on trips to town. On one such occasion, they made a stop at the feed mill (former Co-op) in Chesley to pick up some grain whereby Blanche waited patiently in the car. Moments later a young man by the name of Gordon Leslie Elder stopped by her window to say hello and as they say the rest is history. The young couple often frequented Bailey’s Hall in Tara or took in a local show and were eventually wed at a small wedding on the Calhoun homestead. The union took place on Saturday, April 19, 1941, and was performed by Rev. Curran with the newlyweds travelling to Port Colborne and Niagara Falls for their honeymoon.

Once married, Blanche moved to the Elder homestead on Sideroad 6 in Sullivan Township, where she and Gordon resided with her in-laws, John and Edith Elder. Together, the four of them resided under the same roof for the next four years, whereby the Elder family grew with the additions of Helen (1942) and Keith (1945). Having outgrown the house, the senior Elders soon moved into town and in time Gordon and Blanche welcomed daughters June (1948) and Bernice (1952). In addition to caring for her young family, Blanche was regularly found outside helping Gordon with the chores and farm work. They raised 400 roosters each year in addition to milking twelve cows, by hand I might add, daily. When hydro was installed in 1949, more cows were added to their herd, they added a milking machine and soon sold milk rather than cream. Blanche also helped with the field work during the haying and harvest seasons, and then headed into the house to prepare meals for all the help. To say Blanche kept busy would be an understatement.

Blanche was an avid craftswoman and did a lot of knitting and sewing. In addition to the small items like socks, Blanche made most of the children’s clothes growing up. This included nearly all the dresses for the girls until they reached high school and many play clothes and suits for Keith. In later years these creations of love were made and given to her grandchildren and the generations that followed. Everyone in the family appreciated Blanche’s talent, and her giving didn’t stop there. Through the years she made countless double quilts for family and friends and was also an avid painter. On her 95th birthday, Blanche gifted each member of her family one of her oil paintings, another gift to remember her by. She was also a gifted gardener, loving to spend time working with her flowers and in her flowerbeds. The Elder home was always surrounded by a variety of beautiful, colourful flowers which were appreciated by many. Blanche was also a gifted musician, learning to play the piano in her childhood. She used this talent to become the regular organist at Peabody United Church, where she, Gordon, and the kids attended for fourteen years until its closure. Once members of St. John’s, Blanche continued to give of her time and talents and blessed those around her with her beautiful music. This love of music has since been passed down to her children, grandchildren, and beyond, with many of them being able to attribute this passion back to Blanche.

Although always busy on the farm, Blanche and Gordon did make some time to go out and enjoy themselves. Blanche was an active member of the Marmion Women’s Institute and St. John’s U.C.W. Together with Gordon, she enjoyed dancing and soon took up square dancing. They soon became members of the Happy Twirlers in Hanover and continued dancing there for over twenty-five years. They were also active in the Happy Doubles Club at St. John’s United Church and enjoyed the opportunity to socialize with friends and family alike. Although not big travellers, in the mid 80’s they took their first (and last) airplane trip to Florida with June’s family and saw most of our beautiful country. Many stories were told of memorable times playing games within the Elder home. These times always included much laughter, whereby a variety of card games like euchre, spoons, and rummy were often played. In later years, Monopoly was also introduced, and the Elder family spent countless hours enjoying each other’s company.

Blanche was a loving, caring woman, who always looked after the needs of others before her own. She was also the disciplinarian in the family, so the kids had to keep on their toes when they pushed the boundaries. All joking aside, Blanche had a great sense of humour, however, that didn’t mean she wasn’t a bit of a worrier. Her strong faith also played a vital role in Blanche’s life, and she thankfully passed on these strong values and traits to her children. Blanche was also very talented in the kitchen. In addition to much preserving, Blanche was well known for her apple pies, handmade bread, and honey dip donuts… yum, yum! If she was looking for a treat, Blanche often enjoyed a delicious butter tart or a delightful bowl of ice cream, with Maple Walnut being a favourite. She loved old country music as well as a variety of gospel.

In 1990, Blanche and Gordon built their retirement home on a small parcel of land on the east side of their home farm. Although not wanting to slow down, it was time, and they eventually settled into their retirement years. During this period of their life, they treasured additional time spent with family and friends and welcoming the younger generations of their family. Thankfully, they were blessed with relatively good health and remained in their own home and independent well into their 90’s. Sadly, Gordon passed away in 2015, and Blanche was left on her own for the first time in almost 75 years. With the support of friends and family, Blanche remained at home until 2018, whereby she became a resident of Elgin Abbey in Chesley. In recent years she called Kelso Villa in Owen Sound home, doing remarkably well given her age, with the exception of her eyesight. Sadly, a serious infection, a week ago was the beginning of the end and Blanche passed away surrounded by her family on Wednesday, October 26, 2022, in her 100th year.

Memorial donations to the Residential Hospice of Grey Bruce or CNIB Foundation would be appreciated as expressions of sympathy.