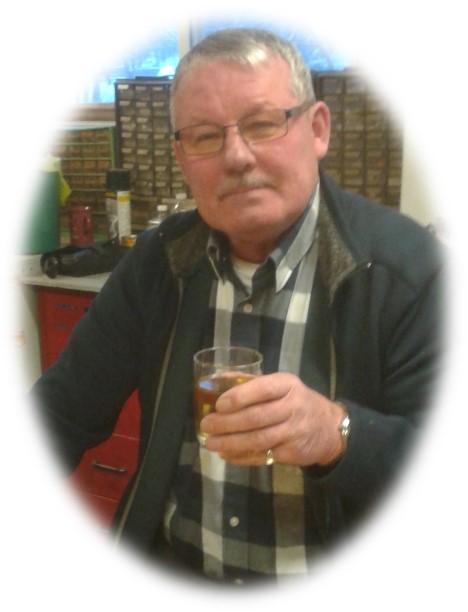 “Knock its horns off, wipe its ass and slap it on a plate.” Well, that’s a unique way of saying I like my steak rare, isn’t it? But that was Bob’s line. In fact, Bob was put in his place on one occasion when the waitress brought out a frozen steak and presented it to him. Ha! He was one of a kind and will be dearly missed.

Robert Leslie was born on Tuesday, September 9, 1952, in Chesley to parents Stewart Leslie and Doreen “Teddy” (Peters) Barfoot. The Barfoot family resided on the 7th of Elderslie, whereby Bob joined his older brother Jim (1951). In time, the boys welcomed younger siblings Pat (1955), Scott (1959), Le-ann (1960), Nancy (1962), and Gwen (1965). Bob attended S.S. #6 Elderslie before later being bussed, in a station wagon with a bus sign attached, to S.S. #4 Lockerby. He went onto secondary school at Chesley District High School for a year before transferring to Walkerton District to participate in their shop program.

Following school, Bob went home to help his father, brother and family on the farm. He enjoyed this living lifestyle and always treasured his time on a farm throughout his life. In the early 1970’s Bob took an opportunity to work at Bruce Power. It was during this time Bob met a young woman by the name of Darlene Jean McTeer. The young couple were married on Saturday, September 20, 1975, and after brief stays in Port Elgin, and a property outside of Paisley, they settled on the farm on County Rd. 11. Here they welcomed Christopher on May 24, 1978, and Melissa on April 3, 1981. During this period, Bob also worked off the farm whereby he built bridges and later worked in the GTA for Penton Construction heading up construction on the Brampton Brick plant and a large OPP headquarters in Aurora. In 1983, Bob and his family relocated to Paisley where they settled on 267 Mill Dr. By the late 80’s, Bob started with Royal Homes and then spent some time with Fritz Concrete in the early 90’s before he returned to Royal Homes in 1996 where he remained as a site supervisor until his retirement in 2015. He enjoyed working with the homeowners, and trades, and had particularly fond memories of his time together with son Christopher, in Hannover, Germany, in 1996. Here they spent a year constructing 38 homes, teaching the locals to build wood structures, and were joined by many young trades from Canada.

When not busy with work, Bob enjoyed being active and involved within his community. He was a proud member of the Aldsworth Masonic Lodge out of Port Elgin, holding a variety of positions through the years. He played in a men’s slo-pitch league for a number of years and enjoyed organizing & volunteering his time with the old car show during Beef Fest in Paisley. Bob was very proud of his old car, his 1967 Firebird which was the first car he ever owned. To say Bob was a bit competitive might be an understatement! Together with Jim Sloan, they won the log sawing competition at Beef Fest. However, Bob was also known for his participation in the Paisley Christmas Light Up competition. Every year, he had to one-up the previous year, with Bob Pearce being the rival. It would be fair to say Bob was a bit particular, as the kids were barred from the front yard during these competitions (as they would leave footprints in the snow). Stories were also told of hand painting the Christmas light bulbs to make sure that everything looked just perfect. As Bob would say, “if something is worth doing, it’s worth doing right!” Needless to say, Bob won this competition for a number of consecutive years, until he was excluded from the event due to his success. As expected, Bob didn’t like that news!

In his free time, Bob enjoyed spending time outdoors. In his younger years that meant snowmobiling and time out on the water in “Tip Sea,” his own refinished canoe. As a family, they also camped many summers at Rattlesnake Point. When not out exploring our beautiful area, Bob could often be found in his shop working with wood. He was a true craftsman and loved woodworking, often spending Saturday morning puttering away singing along with the radio. Bob worked hard throughout his life and instilled in his children that they should always make time for vacation and travel. Through the years, he experienced Europe, much of the US, including Alaska, the Caribbean, & enjoying a few cruises as well.

He was a collector of hats and pins, amassing a ridiculous collection throughout his life. When it came to television, Corner Gas, Little House on the Prairie, and The Waltons (or as Bob liked to refer to it, The Walnuts). Peanuts and jellybeans were also some of his favourite treats. After dinner, he would often like to enjoy a cool liqueur, which he always stored in a freezer. Bob also enjoyed the occasional spirit, with Rum, Rye, and Scotch being his preference. He also had a soft spot for animals and pets, with his cocker spaniel, Taffy & Jesse his favourite.

Sadly, in 2011, Bob and Darlene separated. The following year Bob reconnected with a former classmate, Joyce (Cavill) McDonald at their 40th High School Reunion in Chesley, thanks to Doug Legge & John Alpaugh. They began dating a few weeks later and as Joyce put it… he never left! Lol! Eventually, Bob moved in with Joyce and together they have enjoyed the past nine years. They loved, cared for, and supported one another in the good times and in the bad, creating many memories for themselves, their families, and friends. When the grandchildren were younger, Bob was renowned for his lawnmower rides and more recently even offered a seat on his scooter. In fact, he and Joyce drove over to the neighbours on it in recent months… what a sight that would have been! 😊

Bob was a hardworking, committed man, who would give the shirt off his own back. He was also known to be a little stubborn, or opinionated, but aren’t we all? He was determined and once he put his mind to something there was no stopping him. He enjoyed a night out but also liked to host and cook for others. One of his favourite parts of entertaining was putting the menu together. Some of his favourite sayings included, “Look good, do good,” – he got a haircut every four weeks (worse than a woman… according to Joyce), “I am only going to tell you this once,” “If something is worth doing, it’s worth doing right!” and “Now listen, I am going to give you some advice, you can take it or leave it.” He was truly one of a kind!

Robert “Bob” Leslie Barfoot of Walkerton, formerly of Paisley, passed away at South Bruce Grey Health Centre, Walkerton on Monday, December 6, 2021, at the age of 69.

A private family service will be held with inurnment to follow in the Walkerton Cemetery columbarium.

In lieu of flowers, memorial donations to Saugeen Hospice Inc. would be appreciated as expressions of sympathy.