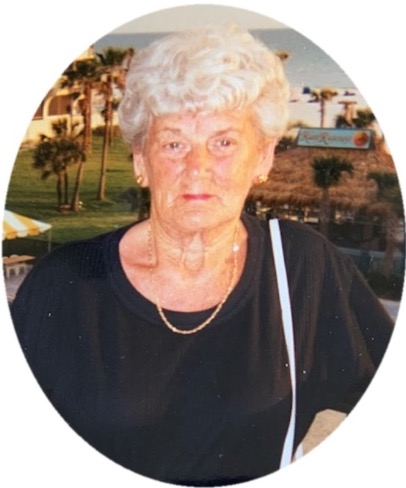 Catherine Morrison was born on May 25, 1921, in Glasgow, Scotland to parents Andrew and Agnes (Murdoch) Cargill with Catherine’s brother William completing the family. Catherine spent her childhood growing up in Glasgow, where she attended both public and high school. Following her schooling, she began working in a local plastic factory.

It was during these years that Catherine was introduced to one Thomas Farrell. The two hit it off immediately, but since Thomas fought in the war, their marriage had to wait. The young couple were married on July 11, 1947, in Paisley, Scotland. Thomas played competitive football (soccer) so they were on the move quite a bit in the early years. They welcomed their daughter Patricia in 1949, but given the times there was not a lot of opportunities for their young family in Scotland. Therefore, in 1950 the family of three boarded a ship and headed to Canada, to begin a new life.

The Farrell family settled in the Mimico area of Toronto, where the family welcomed two more children, Thomas (1952) and Gary (1954). Catherine worked hard caring and providing for her young family. Once the kids were all in school, she went back to work at a local factory in Mimico. As many of you might know, Catherine never possessed a driver’s license throughout her entire life, so if she had to get somewhere it was usually walking. In fact, she loved walking, and in later years often passed up on the streetcar, to walk. These weren’t just like strolls either as on occasion she walked upwards of 30 city blocks to visit family.

Sadly, Thomas died suddenly in 1979, at the age of 59. Soon after, in the early 1980’s, Catherine moved into a smaller condo in Longbranch. She enjoyed visiting with family and her close friends. Everyone and everything she needed was close by.

Catherine was known as a bit of a neat freak and was very particular at times. On one occasion, her granddaughter Michelle came for an unannounced visit and let herself into grandma’s apartment but Catherine was not home. Michelle soon left, but later that day got a call from grandma with Catherine asking, “Did you stop by today?” Michelle informed her that she had, but had no idea why grandma knew she was there? It turns out Catherine’s floors were so pristine, with the carpets usually being vacuumed just right or raked, that she had noticed Michelle’s footprints on the floor, and therefore called. She never missed a thing!!

In her later years, Catherine travelled more, often enjoying trips with her family and travelling companion Margo. Warmer, Caribbean destinations were her favourites and she experienced Jamaica, Florida, Cuba, Mexico and Venezuela, just to name a few. Several stories were told of Catherine and Margo’s experiences and adventures, they truly did have a blast together. Catherine also enjoyed her sports, and could often be found watching hockey (Toronto Maple Leafs) or golf, with Tiger Woods being her favourite. She also had a soft spot for the soaps and thoroughly enjoyed keeping up with The Young & the Restless. Catherine was not particular when it came to food, but did enjoy her seafood. When it came to cooking she wasn’t afraid to experiment a bit either, just ask her family about the chili flakes in the spaghetti sauce… it was a dinner no one would forget! No Christmas was complete without a glass of Baby Duck too! She loved reading, with Danielle Steele being a favourite and was always interested in keeping up with the gossip in the tabloids.

In 2003, Catherine moved out of the city to be closer to family, settling in Richmond Hill, where she enjoyed friends and family. Remarkably, she remained on her own until she reached the age of 94, whereby she moved north to be closer to her family once again, calling Seasons Retirement Community in Owen Sound home. By 2017, Catherine’s age had created more challenges and she made her final move to Grey Gables in Markdale.

Catherine was a kind, loving woman, who was very determined at times. Although small in stature, she could be feisty, very particular and was not afraid to speak her mind. She was a strong woman and could also be strong-minded at times too! However, her main focus in life was her family. It didn’t matter whether it was her children, grandchildren, or great-grandchildren, she loved them all the same and was always interested in what was happening in their lives. Good times or bad, big accomplishments or small, Catherine was always there to show her love and support. She will be missed, but her life and memory will be carried forward by the many stories and experiences of her life, shared by her family.

Catherine passed away at Grey Gables, Markdale on Monday, September 21, 2020 in her 100th year.

A memorial service honouring Catherine’s life will be held at Rhody Family Funeral Home, Chesley on Friday, October 2, 2020 at 1 p.m.

Memorial donations to Grey Gables Activity Fund would be appreciated as expressions of sympathy.

Michelle and Shane, Pat And Bill.

We are so sorry for your loss. Please accept our condolences I know how close Michelle was to her grandmother. Christmas shortbread will bring extra special memories to mind this year for your family

Thinking of you all at this time

We are thinking of you all at this time.

Dear Marilyn, Tom and Family, Kay was a beutifull person and enjoyed a long life. Our prayers, love and thoughts are with all of you at this difficult time. Love and hugs, Mary Anne and Jim.

Dear Patricia and Bill, Michelle and Shane and all of the family,
So sorry to hear of your dear Mom/Grandma ‘s passing. Sending you loving thoughts and big hugs.
Sincerely,
Sherry Caldwell