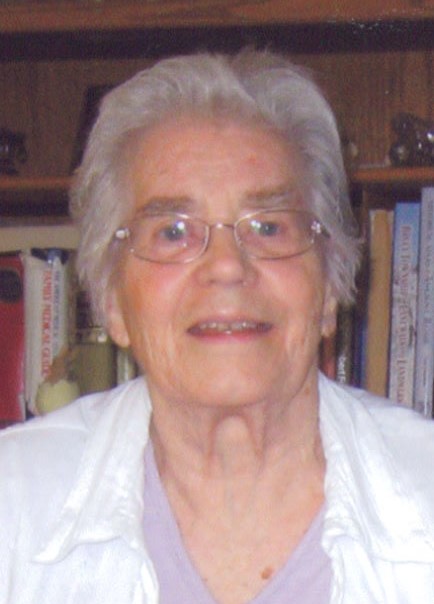 Charlotte Ewen was born on September 19, 1921 at the Kincardine Hospital to parents William John and Charlotte (MacKay) Reid. She was the fourth of six children: John (1917), Ellen (1919), Annie (1920), Charlotte, Margaret (1927), and Shirley (1936). The Reid family farmed in Bruce Township, between Tiverton and Glammis, where the kids attended S.S. #3. Charlotte went on to attend Toronto Bible College, Teacher’s College, and a Church College in Illinois. It was here where she worked in an ammunitions factory during World War II. In 1947 Charlotte started her first teaching position at a remote school in the community of Wabigoon in northwestern Ontario. The following year she moved back to southwestern Ontario and New Dundee where she taught grades 1 – 8. I 1949, she had the opportunity of a lifetime and moved to Jamaica to work in a mission school. Charlotte remained here through 1952, before returning to Ontario.

As a teenager, Charlotte met a young man by the name of Gordon Edgar Wilson. Gordon’s cousin was in the same Sunday school as Charlotte and in turn, they attended the same picnic together… and as they say the rest is history. Charlotte and Gordon were married on Thursday, April 7, 1955 at Shiloh United Brethren Church on the 4th of Bruce. The newlyweds quickly settled on the Wilson Homestead on the 14th of Greenock. At this time Charlotte gave up her teaching career, after seven years of service, to begin their family. The following year, 1956, they welcomed John, with June (1957), Marilyn (1958), and Lloyd (1962) soon following. As you can imagine, life was busy for Charlotte during the ensuing years and she taught, cared, and provided for her young family.

When not teaching her own children Charlotte volunteered her time at Sunday school, acting as both the superintendent and teacher through the years. She was also actively involved in the Pinkerton Women’s Institute for many years. However, to be quite honest Charlotte was content with her quiet life on the farm. She enjoyed a large garden yearly, full of produce for her family and some flowers to add colour and beauty. There was also the raspberry patch and who could forget Charlotte’s baking, particularly her bread. Yum, yum! On the farm, she also loved all the animals, especially the dogs and cats. Although most of the animals were outdoor pets, Jiffy, a K-9, became a favourite as he always enjoyed cozying up to Charlotte when relaxing on the verandah.

In her free time, Charlotte absolutely loved to sew, especially quilts. She was very talented, and her generous nature meant she gave away a lot of her creations. Charlotte produced more than one hundred quilts throughout her life with each product of love taking anywhere from six weeks to eight months to perfect. Charlotte also loved to sing. She sang in a choir as well as a quartet formed with her two sisters and a sister-in-law. In her free time, she enjoyed transcribing music into pieces that could be performed by a trio or quartet. Charlotte was also an avid reader and would often read anything she could get her hands on. When it came to television, Charlotte enjoyed watching “Columbo,” “The Price is Right” and anything that was a murder mystery or needed solving. Although Charlotte’s travel history was limited, she was very content and enjoyed day trips exploring Southwestern Ontario. Finally, she also returned to teaching in later years, whereby Charlotte taught adult literacy in her home. As the saying goes, once a teacher, always a teacher!

At the age of eighty-five Gordon finally conceded to retire from the farm and the couple soon called Walkerton home. Although different, Charlotte made the most of each day and enjoyed additional time with family and friends. She also took a liking to crosswords, apparently always having one on the go, and joined a quilting group that got together once a week.

Faith also played an important role in Charlotte’s life. She was baptized, confirmed, and married at Shiloh United Brethren Church. She helped with a variety of missions throughout her life and went onto attend Pinkerton United Church. In recent years, Charlotte and Gordon became members of Immanuel Evangelical Missionary Church (now Paisley Missionary Church) where they enjoyed praying and singing together. Her church family was a true extension of her family, and she would do anything to help someone in need.

In August of 2014, Gordon had a portion of his leg amputated and they then moved into Elgin Abbey in Chesley for more support. Sadly, Gordon died in July of 2016 and Charlotte was alone for the first time in over 60 years. Her faith, family, and strong will allowed her to make the best of each day.

In April of 2017 Charlotte moved to Hanover, and The Village to be closer to her sister, Annie. Here, she lived out her remaining days in relatively good health until a recent hospitalization. Sadly, Charlotte passed away at Hanover & District Hospital on Sunday, August 15, 2021, just weeks shy of her 100th birthday.

Cherished mother of John (Leah) of Edmonton, June Wilson (Tony Hart) of Ottawa, Marilyn Wilson (Jim Thompson) of Guelph and Lloyd (Linda Challis) of Maple. She will be dearly missed by her grandchildren Stephanie, Scott, Amy, and Russell. Charlotte will be fondly remembered by her sisters Margaret Collins of Caledon, Shirley Woodason of Winnipeg, and sister-in-law Merle Wrightson of Guelph. She was predeceased by her husband Gordon (2016), sisters Ellen Colwell, Annie Campbell, brother John Reid and her parents William and Charlotte (MacKay) Reid.

A public visitation will be held at Paisley Missionary Church (307 Balaklava St.) on Saturday, August 21, 2021 from 11 a.m. until the time of the funeral service at 11:30 a.m. A private interment will follow in Purdy Cemetery, Greenock Township.

In lieu of flowers, memorial donations to the St. John Ambulance (Therapy Dog Program) or Hanover & District Hospital Foundation would be appreciated as expressions of sympathy.

Heart felt condolences are sent along to Charlotte’s family.
Although we didn’t have much opportunity to get to know one another, Charlotte always felt like a good and dear friend whenever our paths crossed during the years of pot luck lunches and entertainment organized by the Paisley Missionary Church.
May it be that we shall meet again…

So touched by reading about Charlotte’s life and family. Prayers to all of you. 🙏🏼

To the Wilson Family, our sincere sympathy to you in the passing of your Mother, Charlotte.
I had the privilege of working with your Mom through Bruce East Women’s Institute when I
was President and she was my Secretary and a good one at that. We enjoyed many good times at meetings and visiting. Our prayers and thoughts are with you.

To the Wilson Family, wanted to express our condolences in the loss of your mother. Charlotte did many things with our mother (Pearl Alexander). They both attended Paisley Missionary church, they both enjoyed quilting and crafting, along with gardening and talking about community news. They both enjoyed being involved with the women’s coffeehour at Paisley church along with many other things. They had so many similar interests and enjoyed being together. After our mother was gone, my sister Rhoda and I would often would go and see your mother as we both felt so encouraged and blessed afterward, from the visit. She was alway interested in what was happening in our lives and in many ways reminded us of our mother and as a result, is why we enjoyed spending time with her. Charlotte was alway positive and always reference her faith, which clearly helped her through all her life experiences.

Our deepest sympathy Lloyd to you and your family. May all your good memories bring you comfort, as well as knowing the difference your Mom made to so many during her life.

My sincere sympathy to you the family of Charlotte.You were blest to have had such a loving caring mother.

So sorry to hear of the passing of your mom. She was a wonderful lady. Cherish the memories. Sending hugs, thoughts and prayers

I am very sorry to learn of Charlotte’s passing. I have many fond memories of being at Charlotte and Gordon’s farm with Mom and Dad. Mom would be there for Women’s Institute meetings or admiring Charlotte’s sewing. Dad and grandpa, Ogle, would be chatting with Gordon often outside near a tractor. I remember Charlotte always having sweet treats. She was a very special lady. Sending my condolences. Janice

The Family of Jack and Audrey Webb

To the Wilson Family,

Thinking of you at this very sad time. We have many fond memories of your family from attending Church in Pinkerton.

Condolences to John, June, Marilyn and Lloyd and their families.

My condolences to Charlotte’s family.

Condolences to John, June, Marilyn, Lloyd and families. I was hoping to be home in Sept to celebrate her 100th birthday. Also, your Mother and I could share another pot of tea and gossip. Will miss her.

Your mother was a very wonderful woman. Never a day went by without a smile on her face and a very positive attitude. I loved looking after your mom at the Village. Will always remember her as the friendliest loving person

My condolences to you June and your family on the loss of your dear mother. May your memories comfort you during this difficult time. Thinking of you.

Our deepest sympathies for your loss of your mom. Know that we will keep you in our prayers as you grieve. Lots of love Robert,Janice,Kyle and Courtney Woodason.

Our sympathy to all that loved and will miss this wonderful lady as we do. We hope aunt Charlotte has now found peace, Love Ray Woodason, Lynn & Elizabeth

oh aunty how I hoped for another giggle session together with you .. seemed we always had great chats with lots of giggles. I appreciated those moments, and even the letters you sent while I was overseas teaching in Manila. ………….. to the family I grieve with you, but know that she is in a better place, with no pain. Trust during the waves of grief you will remember some fun thing shared with your mom and end the wave on a high note. see you soon :'(

Our sincere condolences to Aunt Charlotte’s family. She was a great gal and she will be missed.

My condolences to the family in the loss of a wonderful mother, grandmother, friend and also a special neighbour