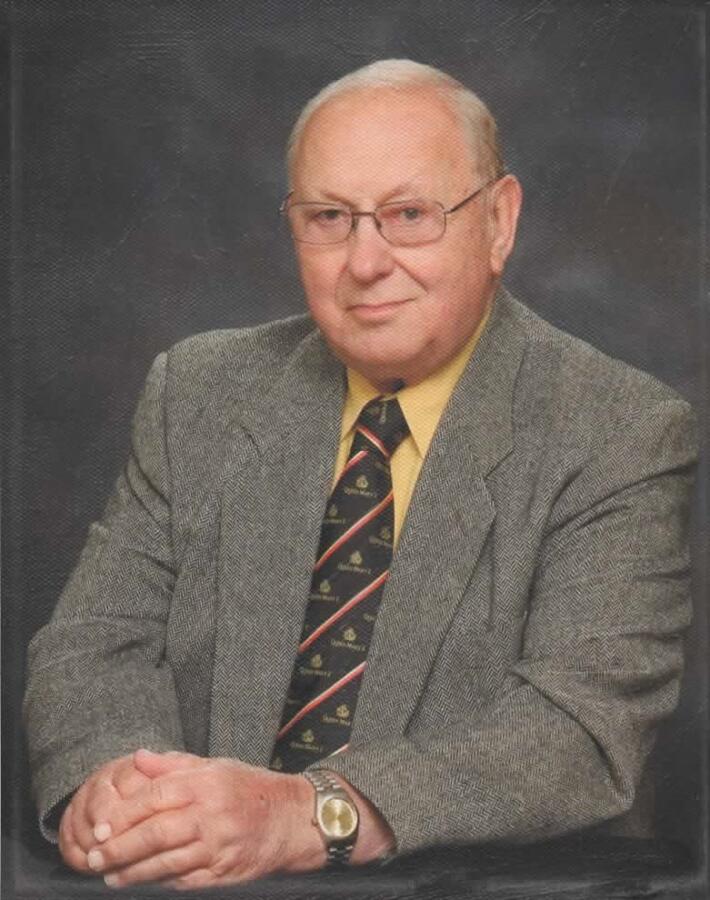 Have you ever heard the phrases? “You can drive to Toronto and back on empty,” or “That’s a really good spider dog fire.” If so, you were probably lucky enough to know Clarence Sprung. These unique sayings, and many more (like, “I wouldn’t wear that to go gather the pigs”…), would often bring a smile and will live on in the stories told by his family and friends for years to come.

Clarence George was born at home, on the family farm, on Concession 5B of Sullivan Township to parents John and Ida (Lipskie) Sprung on Wednesday, January 28, 1931. He was the youngest of nine children and joined older siblings, Leonard, Eldon, Elmer, Emerson, Alex, Vera, Laverne, and Evelyn. The Sprung family operated a mixed farm and in time Clarence attended S.S. #3 Sullivan, Aitcheson School. He walked two concessions to and from school daily but sadly did not finish Grade 8 as his appendix ruptured. He fell seriously ill and almost died before being offered a new miracle drug, from Toronto, by the name of Penicillin. This treatment saved his life!

Growing up, Clarence had many chores around the farm. He gathered water from the spring, churned the butter, and even told stories of chopping ice blocks from the lake, then packing it in sawdust for the icebox in the summer. When not busy working around the farm, Clarence and his older siblings often enjoyed each other’s company. They were a very close family and spent a great deal of time together. In addition to working on the family farm, Clarence also helped his brothers with their trucking businesses. In fact, once established, Clarence was the fourth Sprung boy (Eldon, Alex, Laverne & Clarence) to own and operate their own transportation company.

Clarence’s first job off the farm was at Grey Motors in Owen Sound where he was a salesman. It was around this time that Clarence was invited on a double date by a friend. His friend’s date that evening was a beautiful, young lady by the name of Phyllis Marie Evers. Let’s just say the night at Harrison Park went well for Clarence (and bad for his friend) as he and Phyllis hit it off immediately. As the saying goes, the rest was history as Clarence and Phyllis were married on Saturday, May 22, 1954, at Faith Lutheran Church in Desboro. The newlyweds soon rented a farm south of Desboro before purchasing the Evers homestead, on Grey Rd. 40 north of Desboro, from Phyllis’ parents in 1956. The Sprung family soon began to grow with the arrival of Patricia “Pat” later that year. At this time Clarence was farming full-time and the family continued to grow with the arrival of Penny (1961) and Pam (1965). Although Clarence never had a son, the girls always felt they had a big brother on hand. Through the years, he opened his door and provided a home to many young men, making sure they always felt like part of the family. He was truly one-of-a-kind!

In 1964, the Sprung family purchased a large property in Alvanley and Sprung Livestock Transport was born. In addition to driving truck himself, Clarence owned and operated six trucks in his prime and employed many others through his 38 year career. In time, Clarence established a name for himself within the industry and gained the respect and business of many local farmers, often acting as a buyer for them. He soon became a well-respect buyer for the Ontario Pork Producers and Stock Owners. In November of 2002, Clarence retired and moved onto the next stage of life.

Clarence worked hard through the week, but Sunday was always reserved for his girls. The day usually began with the family attending church together. Then it was usually onto a family gathering or visit. There were countless Sunday drives down the gravel roads, which included hikes on the Peninsula and usually ended with an ice cream in hand.

Life was not all work and no play for Clarence. He liked to have fun and enjoyed a variety of pastimes. Clarence was an active member of the Allenford Lion’s Club and Curling Club where he was an integral part of the construction of the new (current) curling rink in Allenford. Away from the rink, Clarence enjoyed fishing, golfing, snowmobiling, baseball, horse racing, and wrestling… yes, you read that right. In fact, on several occasions, Clarence was known to wake up at 2 a.m. to watch a pay-per-view wrestling match. To say he was an avid fan would be an understatement! 🙂 The Sprungs also enjoyed camping. Over the years each trailer continued to get a bit bigger. Summer months were often a slower time for Clarence and therefore these months were often spent travelling and camping with his girls. They explored the likes of Ottawa, Algonquin Park, Michigan, Sault St. Marie, and every place in between. Together, Clarence and Phyllis also travelled coast to coast in Canada, and also explored the southern U.S.

In 1969, the Evers family purchased a “swampy” (Clarence’s words) piece of property at Berford Lake. In the years following, summers were spent clearing the land and building campsites for family. Here, Clarence loved to entertain whereby weekends were often filled with swimming, boating, BBQs, and campfires. Of course, there were also many games of horseshoes, Aggravation, Cribbage, and baseball at the beach. As you can imagine there was usually a drink or two involved, whereby Clarence loved to bartend and was known to throw his fair share of caps away after opening the bottle. This usually led to a fun and entertaining afternoon or evening, but not everyone felt the best the next morning. Lol! In the summer of 1988, Clarence and Phyllis began to build their dream log cabin. Sadly, on Labour Day weekend Phyllis was diagnosed with cancer and she died on Boxing Day. The family rallied around Clarence and helped to see their dream come true, whereby countless wonderful memories have been made at “the lake” in the years that followed.

The cabin became Clarence’s permanent home in November of 2002 when he moved north of the checkerboard. He could often be found loading up the woodstove, cutting grass, or picking dandelions. He was also the proud unofficial caretaker of Berford Park and took great pride in maintaining the grounds. In later years, Clarence went on to spoil his grandchildren. As a child, who wouldn’t love Alphagetti, KD, or a spider dog with Poppa? He loved having them up at the lake and enjoyed watching them entertain themselves by playing in the creek. Thankfully, Clarence’s great-grandchildren have also been able to enjoy this experience at the lake.

Clarence was a loving, well-respected, family man who always put the needs of others before his own. He had a great sense of humour, was very sociable, and was often a big tease. He was also known as a bit of a flirt, just ask the wonderful staff at Gateway! 🙂 He was full of laughter and fun, but most of all, full of love that he shared with everyone that knew him!

In recent years Clarence’s mobility began to decline whereby he called Lee Manor home after a fall in 2014. He always wanted to get back north and was thoroughly pleased when a bed became available at Gateway Haven in 2016. Here Poppa spent countless days playing Bingo, watching the birds, listening to music, teasing the staff, and always looking for the next individual to play crib with him. Although Covid brought many changes, including fewer in-person visits, Clarence learned to adapt as well. He became accustomed to Zooming… after he figured out his family wasn’t on television. In recent months his health continued to decline but he never stopped asking about his grandchildren and great-grandchildren and he always had that twinkle in his eye! He will be missed!

In lieu of flowers, memorial donations to Friends of Gateway or Berford Lake Municipal Park, a place near and dear to Clarence’s heart, whereby a memorial will be placed in his honour (please make cheques payable to Penny McLeod), would be appreciated as expressions of sympathy.