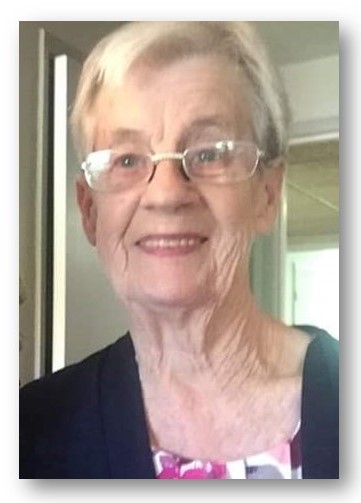 Diane and her twin sister, Paulette were born on Saturday, August 17, 1940 at Toronto General Hospital. They were welcomed into this world by their parents Paul and Hilda (Harris) DeReske and older brother Greg (1934). The girls were inseparable from a young age and they remained extremely close throughout their entire lives. After spending her early years in Toronto Diane’s parents separated when she was only five. She and her siblings soon moved in with their grandfather, Grandpa Harris and Aunt Dorothy (5 years older than the twins) where they spent time in Grand Valley during the Second World War before settling in Claude, outside of Brampton. Diane attended school in Inglewood, before completing her high school education in Brampton.

It was during this time that Diane was introduced to a young man by the name of Gordon Emerson Laver at a local social event. Gord originated from nearby Hornby, and the young couple’s relationship soon blossomed and culminated with their marriage on Saturday, June 7, 1958. The newlyweds called the area of the 10th Line and Steeles home and welcomed their first son, Emmerson in December of 1958. The Laver clan soon continued to grow with the arrival of Rick (1960), Gord (1961), Jeff (1963), and Darryl (1969). In 1965, the Laver family built a new home on the 10th Line. In addition to caring for her young family, Diane also worked at Northern Electric in Brampton. To say Diane led a busy life would be an understatement.

Gordon’s life-long dream was to be a farmer and therefore own his own farm. His dream became reality in 1968 when the Lavers purchased their piece of paradise. The 100-acre parcel of land was located on the 15th Sideroad, just south of the 8th concession in Arran Township. The purchase price? $11,000, which was a lot of money in those days. Although the family was excited about new opportunities Diane was in for some surprises. She moved north to her new home with four little boys and NO running water. As many of you know, Diane was small but mighty, and a tough cookie, so although challenging this did not get her down. She and Gordon worked hard, often side-by-side on their dairy farm to provide for their family. When the boys got a bit older and could help a bit more around the farm, Diane took a job with Whittaker Cable in Owen Sound and also spent a few weeks each year picking apples and strawberries locally.

In their limited free time, Diane and Gord enjoyed attending local dances together and often entertained friends and neighbours on Saturday evenings, whereby a game of cards or Domino’s was sure to break out. Diane also had a green thumb and loved to spend time outside in her flowerbeds. She was known to particularly enjoy her Roses of Sharon and spent countless hours beautifying their property. All the Laver boys enjoyed their sports, and Diane was constantly running every which direction getting them to all their hockey and baseball games. Of course, she was their #1 fan, and in later years enjoyed taking in the grandchildren’s sporting events as well. When not cheering on her own family, Diane could often be found (and heard) supporting her beloved Toronto Maple Leafs and the Blue Jays.

It should also be no surprise that Diane knew her way around the kitchen. She did after all have six men in the house… and she never disappointed. The bread truck delivered two trays of bread (that is 20 loaves) to Laver’s home every Saturday, imagine! Diane was best known though for her baking and preserving. Donuts, date squares, butter tarts, and her pies were family favourites. The boys do not remember a meal that didn’t include at least one option (often more) of pie for dessert. In addition to preparing delicious meals for her family, Diane was also known for her yearly sit-down turkey dinner for the whole Tara Intermediate Hockey team and their girlfriends. Gord coached the team, with Em, Rick, and Gord playing on the team. In later years she often won over the grandchildren with her scrumptious Spaghetti and meatballs – never disappointing.

Later in life, Diane and Gord enjoyed several trips to Las Vegas and loved to spend time at the local casinos trying their luck. They also cherished time at the track, taking in countless harness races and watching their son Darryl drive. Other adventures included several trips east to visit family and the occasional music concert. Diane loved her dogs and was often seen with a poodle on her lap. Family and friends alike will remember Diane’s close ties with Tina, Whiskey, Joe, and Misty. She also loved to read, and was very fond of James Patterson’s writing. Diane also enjoyed the challenge of crossword puzzles. When it came to treating herself, Chinese food was a favourite (especially chicken wings) and she liked to wash it down with an ice-cold pop.

Sadly, Diane’s world was turned upside down in 2006 when Paulette died suddenly in January, and that fall on October 16th Gord died after a prolonged illness. Although forever changed, Diane put on a strong face and put her best foot forward. Her family was there to support her, and together they made the best of each day. Calls and visits from her grandchildren and later great-grandchildren were highlights for her as her family was always first and foremost in her life. In 2009, the tough decision was made to sell the farm and Diane soon called Hanover home. Although this move was challenging, when settled she took some solace in being closer to the casino! 🙂 In the years that followed her mind began to fail her, and she soon required more care and support. In 2016, she became a resident of Elgin Abbey Lodge where she lived out her remaining days supported by friends and family. Diane passed away at South Bruce Grey Health Centre, Chesley on Saturday, June 5, 2021 at the age of 80.

In lieu of flowers, memorial donations to the Chesley Hospital Foundation, Alzheimer Society or the charity of your choice would be appreciated as expressions of sympathy.

Thinking of the Laver family at this time Hugs to all

We are so sorry for your loss. Sending lots of hugs to the entire Laver family.

So sorry to hear of the loss of Diane. Our sincere sympathy to the Laver family, you are in our thoughts and prayers.

Our condolences to the Laver family

Sending our deepest sympathies to the Laver family! You are in our thoughts and prayers!

So very sorry for the loss of Diane. She was a lovely lady. Thinking of you all at this time ♥️

Karen and Dwayne Fischer and family.

Gord and Sandra . My condolences to you and your Families on the loss of your mom

So sorry for your loss. We are thinking of you all.

So so sorry for your loss…thinking of you all…

So sorry for your loss thinking of u guys xxoo

My condolences to you and your family

Our condolences are with the Laver family, at this difficult time.

My deepest sympathy to all of the family, such privilege to know her.

Our condolences to the entire family.

Thinking about you at this difficult time. Our sympathy to the Laver family.

Our sympathies to Diane’s family.

Thinking of you all during this difficult time. May happy memories help you through the coming days.

Our sincerest sympathies. We are thinking of your family at this time.

Many hugs from Lurgan Beach. Our thoughts are with you all through this difficult time.

Thank you for the privilege of knowing her. I’ll miss her more than you could imagine. condolences to the family. You’ve lost a good one

Gord, Sandra & family you have our deepest sympathy. Our thoughts and prayers are with you at this time. Cherish the memories.

Our deepest sympathy to all of the family

Sending our deepest sympathy to all. Our thoughts and prayers are with you❤️

Deepest sympathy to you all.

So sad to hear of Diane’s passing, your family is in our thoughts & payers. Diane was so special to her Aunt Dorothy & Uncle Mikey…we are thinking of you.

So sorry to read about your mom, grandmas passing. She certainly was a good soul.
Cheryl Pellett (Tambling)

Gord, Sandra and family, sorry to hear of your loss. Our condolences to all.

Sending my sympathy to the family!