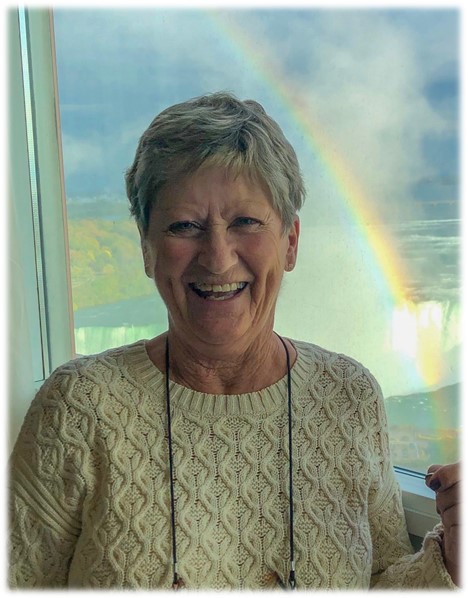 Diane Jean was born on Friday, December 22, 1950 in Hamilton to John Albert and Jean Robina (Dowhan) Thompson. She was the third child of six children, David (1948), Kenneth (1949), Diane, Sandra (1952), and twins Marilyn and Marlene (1954). Her father worked for Maislen Bros. Transport and shortly after Diane’s birth, the Thompson family relocated to Chesley.

On December 17, 1955, Diane’s mother sent her downtown to fetch a loaf of bread. While she was gone, a fire started in their home and sadly, her mom and three sisters, Sandra, Marilyn, and Marlene, all perished in the blaze.

Diane attended Chesley Public School and a few years later, her father married Doris (Currie). The year was 1957. While Diane was in Grade six, the Thompsons moved to Walkerton. She finished public school in Walkerton, and after completing Grade 9 in Walkerton, returned to Chesley for Grade 10.

In 1968 Diane married Frederick Myles at Holy Trinity Anglican Church in Chesley. Together they had two children, Andrea (1969) and Brock (1971). Fred and Diane divorced in 1990.

At the age of thirty, Diane returned to school and graduated after one year as an RPN. This was a very dedicated effort for Diane as she had to drive to Owen Sound daily for her training while raising her two young children. Diane worked at Chesley Hospital from 1980 until 1989. After successfully completing her exams, Diane then went on to work as a paramedic from 1989 until 2006, the time of her retirement. She continued to live in Chesley until 2009 and then moved to Hanover, where she has lived ever since.

Knowing Diane, you would know that she loved shopping! It didn’t matter if it was online, at the mall, or at any local yard and garage sales, she always came home with full bags and always happy with her purchases. She always had a cat with her most precious ones being Angel and Bella. When it came to food, you could say that Diane was a bit of a picky eater. She was the type of person who would order steak at a Chinese restaurant, and always Pepsi to drink! Not your typical choice when at a Chinese restaurant!! 😉 Diane loved anything salty. She enjoyed All Dressed or BBQ chips, and loved Glossettes. One of her favorites was ice cream. It didn’t matter what kind, as long as it was cold, she was happy! She enjoyed watching True Crime, America’s Got Talent, The Bachelor/Bachelorette, and any documentary about the Royal British Monarchy. Diane was fortunate enough to travel to Florida a couple of times, Hollywood, California, Palm Springs with her brothers, New York City, and down to Buffalo for Brock’s hockey games.  She enjoyed gambling and playing the slot machines at the casino. Diane was always the one to take photos of everyone else. She loved taking photos of everyone and made sure she was in the shots as well!

Diane’s true love was her grandchildren. She would do anything for them. She would drive all over the province just to watch her granddaughters play ringette, and she was happiest when she was spending time with her grandchildren. Diane would drop anything to help a family member in need. If they were stuck in a snowstorm, or just needed a ride, she would always put them above herself. Her love grew the day her great- granddaughter Adela was born. Adela was the light of Diane’s eye, and she had Diane wrapped around her finger. Alex, Adela’s mom would send Diane pictures daily and no matter the mood she was in, it would easily turn her day around. Not only was Diane a great mother, grandmother, and great- grandmother, but she was also a great friend. She valued her friendships, and she was a genuine joy to be around. Diane loved her weekly Thursday night cocktails with Jeanette.

When Diane was diagnosed with cancer in 2018 she refused to let it slow her down! She never ever complained and would drive herself to Kitchener and back for radiation and/or chemotherapy and squeeze in a Home Sense shopping visit at the same time.

In the last few months, Diane’s health deteriorated, and with the help of her good friends and Grandma Doris she was able to stay at home. Sadly, and courageously, she passed away peacefully surrounded by her family at her home on Wednesday, August 31, 2022, in her 72nd year.

Inurnment in Chesley Cemetery will be held at a later date. As expressions of sympathy, donations to the Grey Bruce Animal Shelter would be appreciated by the family.