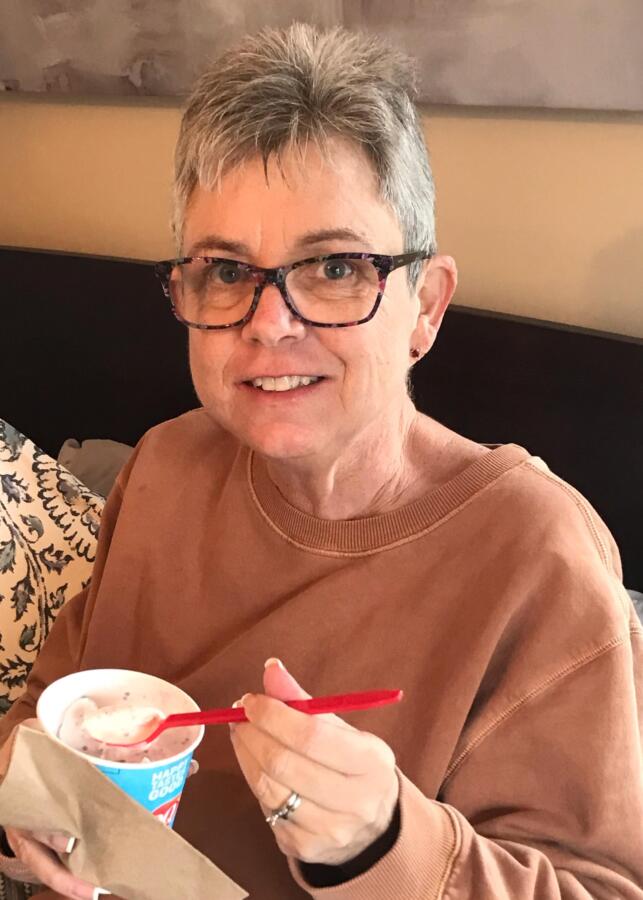 Dianne Elizabeth was born on Saturday, January 18, 1964, in Chesley to parents Samuel Arthur and Myrna Angela (Miller) Cooke. She was the eldest of three girls, Dianne, Nancy (1965) and Janet (1969), and her childhood was full of many adventures (and misadventures) with her sisters and the neighbouring children. As the eldest of three girls, Dianne was often both looking out for, and fighting with, her younger sisters. As the sisters grew up, they remained close, celebrating the good times, and helping each other through their challenges. The Cooke family resided in a schoolhouse southwest of Chesley on County Rd. 19, until Dianne was 4 or 5. The family then moved into Chesley and settled into a home by the arena, before finally moving to the south edge of town. Dianne began her education at Chesley Public School and went on to attend Chesley District High School, graduating in 1981.

It was during her high school years that Dianne was introduced to a young man by the name of Dale Norman Ahrens. Although four years her senior, they shared several interests including curling and Junior Farmers, to name a few. They soon began dating and together they welcomed their daughter, Jane in 1981. This was followed shortly after by their formal marriage on Saturday, September 18, 1981, at Dianne’s childhood church, Elmwood Baptist Church.

Dianne enrolled at the Regional School for Nursing Assistance in London the following year, as Dale completed his schooling at Western. When not in the city, they lived between their parents, until both of their graduations in 1983. They returned to Elmwood and rented a home just west of Beckenhauer’s Garage.

As a Registered Practical Nurse, Dianne soon found work at Parkview Manor in Chesley. In 1986, their family was made complete with the arrival of Andy. It was this same year that Dianne and Dale moved onto the Ahrens homestead, taking over the family farm from Dale’s parents. Living on Concession 12 brought so many dear and long-lasting friendships with neighbours. The thought of all the shared car pools, barbeques, celebrations and Friday afternoon tea parties always warmed her heart.

With young children at home, Dianne continued to work part-time, spending time at the Hanover Hospital, the Chesley Hospital and with ParaMed/VON, before gaining full-time work. At that time, she took a job with South Bruce Grey Health Centre as an RPN, working in all four sites. Later in her career, at the age of 50, Dianne joined the team at Home & Community Support Services, working with their Day Away and Meals on Wheels programs in Hanover. There, she enjoyed the change of pace and enjoyed the interactions with her co-workers and participants alike. Di was born to be a nurse and to look after others. She took the time to provide the highest level of nursing and personal care, build strong relationships with patients and their family members, and provide things such as birthday cakes, slippers, tarts and cookies when needed. Her ability to help clients and family members negotiate difficult conversations about issues such as driver’s licences and long-term care placements was truly masterful. She formally retired in 2019, at the age of 55.

Dianne also served her community as a volunteer, helping at the schools as her children grew up and also helping Dale when he needed some support or a capable chaperone. She also gave of her time with the Elmwood Chamber of Commerce, taught Sunday School at St. John’s Lutheran Church in Elmwood, and lent a helping hand at the Chesley Legion. Prior to the pandemic, Dianne was the driving force behind the Dining Club, which again served the needs of seniors in the community.

If afforded some free time, Dianne loved heading to the beach, particularly Sauble. She also enjoyed kayaking, biking, snowmobiling, and curling. The family began camping regularly when Andy was playing ball and in 2010 officially called Green Acres Campground, outside of Kincardine, their home away from home. At Green Acres she developed close bonds with many wonderful friends. There was always a count-down to opening day, May swims in Lake Huron, and arrangements to get to the beach or pool, as well as many delicious meals shared with friends.

Dianne enjoyed collecting Christmas decorations, as well as decorating for all of the seasons. It was always a treat to drive by the farmhouse and see the seasonal decorations adorning the house and yard. After moving to Owen Sound, Dianne also became an Owen Sound Attack fan, and enjoyed cheering on the team with friends and family. In terms of pets, the Ahrens almost always had an indoor dog, with cairn terriers, shih-tzus, and most recently “Cooper,” their COVID rescue dog.

It should not be a surprise that Dianne’s favourite months were during the summer, starting with the first of May and the opening of the trailer park, where she developed many wonderful friendships. She also took up kayaking in recent years, and she loved to paddle in Lake Huron. Over the years, along with family and friends, Dianne travelled to several European cities, as well as many places in the United States. Among Dianne’s highlights would be her road trip to Pittsburgh, Temagami houseboat adventures, cruising the Caribbean and family visits to Sioux Lookout, otherwise known as “paradise north”.

Dianne loved being around children, especially nephews Matt and Danny, and later Kerstin, Sam and Samantha. She always had special stories and memories of each of them. They could rely on her to “tell it like it is”, and Aunt Di would always lay down the law if need be.

Starting in 2010, she also welcomed four grandchildren over the next six years, after the family grew when Jane married Craig Sadler, and Andy married Jamie Underwood. Liam, Sophie, Logan, and Blake could be relied upon to entertain her with their stories and adventures, facetime calls and hockey games, and put a smile on her face even when things were tough. She loved to share ice cream, Christmas cookies and beach days with her grandchildren and would do anything for them.

In 2018, Dianne and Dale downsized, leaving the farm, and relocated to Owen Sound to be closer to their family and grandchildren. She made several close friends in her new cul-de-sac and she enjoyed having neighbours over for drinks and for meals.

Dianne had a big heart. She loved to help others through her work and her community service. For many Christmases, the family meal would include clients from her Day Away program or from the community that didn’t have a place to go. She would always be ready to set one more place at the table or to pull up a chair for someone to join. While she may not have always done things the way some would expect, she had the best of intentions, and was most content when those around her were happy.

Dianne spent most of the last two years battling pancreatic cancer. She remained determined to fight and to “steer her own ship” as much as she could. She was able to fulfil her goals of getting to her trailer and getting out on the kayak one last time earlier this summer. She spent the last few weeks of her life surrounded by family and finally allowed others to take care of her after decades of taking care of them, including her husband, Dale. She passed away at Chapman House after a brief stay, surrounded by love, on Tuesday, July 12, 2022 in her 59th year.

A celebration of life for Dianne will be held at the Elmwood Community Pavilion on Sunday, August 28, 2022 from 1 – 4 p.m. with a service beginning at 1 p.m. Inurnment in St. John’s Lutheran Cemetery, Elmwood.

As expressions of sympathy, donations to the Home & Community Support Services (for Day Away Program) or to the Residential Hospice of Grey Bruce would be appreciated by the family.