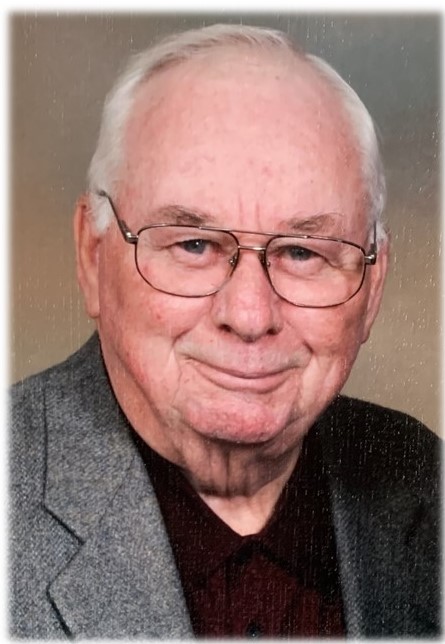 Douglas Roger Joseph was born in Hanover on Sunday, August 18, 1935 to parents Harold and Ellen (Holden) Mercey. He joined his older sister Joan and was followed by younger sister Janet a few years later. The Mercey family resided in Hanover where Doug attended public school at Holy Family before completing his high school education at J.D.S.S. During his childhood and teenage years, Doug became very close with his cousin Charlie (Mercey), as they were the same age and enjoyed many of the same sports. Although not brothers by blood, they were often mistaken for siblings and enjoyed a great amount of time together.

It was also during these early years that Doug was introduced to sports, mainly baseball and hockey. To say he excelled at them would be an understatement, as he was truly more gifted than most at whatever sport he picked up. To this day, Doug’s name can be found on a variety of trophies throughout Grey Bruce and as far away as Quebec. In fact, in his late teens, Doug received a letter from the Detroit Red Wings offering him a tryout with their NHL club. Sadly, it was not meant to be, as Doug’s mother suffered from a variety of health issues and he was needed more at home to help support and care for his family. A difficult decision I am sure, but it quickly tells you the type of man Doug was. His family always came before himself.

Following school Doug soon found work with the Town of Hanover and in time became a lineman with the town. Years later an opportunity arose to work for Ontario Hydro, travelling the province and working on the construction and maintenance of the large, primary power lines. Although Doug enjoyed the work, he did not care for all the travel as he was only home on weekends and spent much of his working career living out of a suitcase, going where the work was. However, he was never one to complain and remained a valued employee until his retirement in the late 1990’s.

At home, Doug continued to be the main caregiver for his mother as his father passed away at a young age. When home on the weekends, Doug liked to stop by the Legion or Union Hall to enjoy a drink and catch up with friends. In fact, it was at the Union Hall in Hanover that Pat and Doug reconnected. The two had known each other most of their lives but life took them both in separate directions. However, in 1978, this changed. There are a couple of different versions of their initial courtship. If you were to ask Doug, he would have told you that Pat chased him around trying to win over his attention, however, all that matters is she did!  The couple soon began dating and Doug quickly welcomed Pat and her four young children into his life. He loved them all unconditionally and immediately took on the role of a father figure to the children. On Friday, October 9, 1981 Doug and Patricia Gertrude Anne Eby were wed before the Justice of the Peace in Walkerton. Months later, Doug proudly formally adopted Pat’s youngest son, David as his own, and the Mercey family settled into their new life and home together on 13th St. in Hanover. Many great memories were made in that home!

In his free time, Doug loved everything sports! In addition to hockey and baseball, Doug also enjoyed curling, bowling, lawn bowling, and golf, just to name a few. In fact, for a few years, Doug and some friends took a yearly trip south, to Myrtle Beach, to enjoy the links. When grandchildren came along, beginning in 1983, Doug took his passion to the mini-golf course whereby he enjoyed countless rounds with many of the grandchildren. Many memories were also made during their yearly 2-week family vacation in Sauble Beach. Each year, Pat and Doug, along with their children (and spouses) and grandchildren enjoyed each other’s company and soaked up the rays and sand of Sauble. During these vacations Doug was known for his packing, in other words, packing all the beach supplies AND people (often illegally) into the station wagon to avoid additional parking fees. Lol! He was also known for his “headcount walk.” The story was told that anytime anyone was in the water, especially the grandchildren, Doug could be found pacing the water’s edge counting heads. He himself loved the water, however, at these moments he felt compelled to stand guard and watch out for the well-being of everyone else as they enjoyed themselves. Again, just a glimpse of the type of man Doug was.

Although not much for travelling Doug and Pat, joined Kim and Dennis on a trip to Las Vegas to celebrate both couples’ 10th anniversary. Back at home, Doug was an avid reader and spent countless hours with his nose in a book. He preferred thrillers, history, and geographical publications. Amazingly, much of this information and knowledge was retained by Doug and passed on to those around him. He loved treating (or maybe a better word would be spoiling) his grandchildren and more recently his great-grandchildren. Several stories were told of trips with grandpa to the store to get his paper, whereby the kids often (always) enjoyed a treat on the way home. When not spoiling the grandkids, Doug could usually be found doing something similar for his four-legged family, Elmo and Chucky. They were his inherited children and he loved them dearly. In his free time, Doug could often be found enjoying music from the Mercey Brothers (his 1st cousins) or catching up on all the CNN news. After knee surgeries in 2005 restricted his participation in sports, Doug resorted to watching them on TV and absolutely loved watching his grandchildren and great-grandchildren participate in their sporting activities. It should be no surprise that he followed the Maple Leafs and Blue Jays very closely. When able, Doug gave freely of his time and enjoyed volunteering at a variety of events at the Hanover Legion throughout the years. He was never one for the spotlight and instead much preferred to go about his work quietly and behind the scenes. In retirement, he and Pat volunteered their time assisting with Meals on Wheels in the Hanover area, always happy to help wherever needed. We also can’t forget to mention his daily trips to McDonald’s for coffee. Although the coffee was important, Doug enjoyed this opportunity to reconnect with friends and members of the community, with all the most recent local gossip being discussed!

Doug was a devoted family man and it should be no surprise to learn that Pat and the kid’s needs were always put before his own. Although quiet, Doug was modest, kind, thoughtful, and never judged others. He was organized, economical, and was the quiet leader within the family, always leading by example. Doug was probably best known for his dry sense of humour and was often the first to laugh, even at his own jokes. He was truly one of a kind. Doug was also devoted to his faith and was a proud, lifelong member of Holy Family parish in Hanover. In recent years, when physically unable to attend Masses in person, Doug and Pat could be found worshipping together in the comforts of their living room on the television. He was a true disciple of God and his purpose in life never wavered.

In 2015, Doug and Pat downsized, calling 17th Ave. home. They enjoyed making new friends and quietly settled in amongst their neighbours. Together they made the best of every day and enjoyed retirement together. Then the pandemic hit, and everyone’s life was turned upside down. Like most of us, the pandemic brought many challenges and the isolation was difficult for Doug. In the months following, his health began to decline, however, he was adamant that he remain at home. The only way he was going out of his house was “feet first” – his words not mine. With the loving care of Pat and family, they afforded him the final wish, caring for his many needs in recent months. However, it was the least they could do for a man that did so much for them throughout his entire life. Doug passed away peacefully at home, on Thursday, October 28, 2021. He was 86.

Visitation will be held at Holy Family Catholic Church, Hanover on Tuesday, November 2, 2021 from 12 noon until the time of the Funeral Mass at 2 p.m. Cremation will follow with inurnment in the Hanover Cemetery.