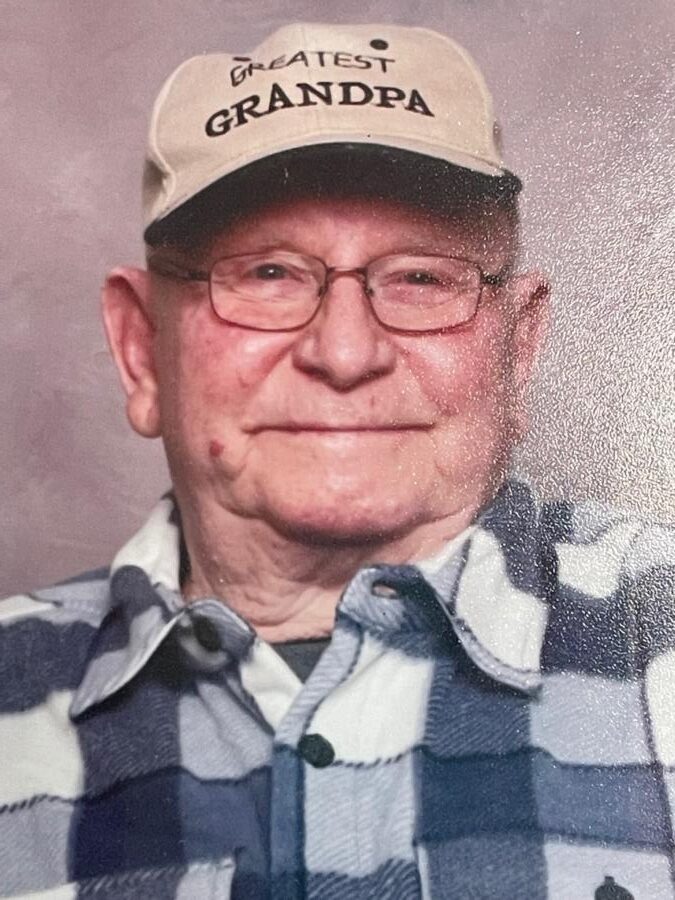 Edward Murray Yule was born on December 29, 1934 in Brant Township, to parents Thomas Dean and Rita Mary (Hetsler) Yule. Ed was in the middle of the Yule children, being fourth after Tom, Hazel and Earl, followed by Edie, Mervyn, Myrtle, Harvey, and Terry. Their family grew up near Chesley. In Grade 6, Ed’s father passed away leading him to drop out of school to help around the family property. After getting his driver’s license at 16, he got a job at a tire factory outside of town and drove back and forth so he could help provide for his mother and his siblings.

Ed was working for Roy and Mildred Lowe on their farm in his 20’s when he met a young woman from the Teeswater area, by the name of Barbara Waddell. They were married on December 24, 1953. The two of them lived in a trailer on the Lowe’s property when they welcomed their first daughter Deby, followed by Darlene, Sherry and finally Angela. In the middle of having 4 beautiful young girls, they built and moved into their own home on the main street in Chesley in the late 1950’s. Ed, Barbara and their young family moved to a dairy farm near Blyth for a year and a half before moving back to Chesley.

Ed got a job with Krug Bros. Co. Ltd. in Chesley working in the sawmill, hauling logs. He would take 2 of his girls at a time with him for the trips, which they loved so that they could spend more time with their dad. In 1968 while working in the bush by himself, a hose broke on the boom arm of the truck causing a log to crash down and land on his legs. He was able to move the boom enough to get the log off of him and managed to drive himself to the sawmill.  His co-workers got the help he so desperately needed, at that time. His right leg was crushed, and the other was injured. Ed was in a Toronto hospital for months healing and doing physiotherapy.  When he finally got fed-up and signed himself out of the hospital, clumsily using crutches, he took the bus home. The doctors told Ed he would never walk again, but Ed being very determined to never give up, proved them wrong.

In 1969 while still recovering from his accident, Ed and Barbara bought the Century Restaurant in Clinton, being they had 4 girls that were able to help out at the restaurant. This was hard for him because he would be walking and his leg would give out, but he was very relentless and determined to beat this debilitating injury. He decided to do the cooking for the restaurant and with the help of his family, he was able to make this venture work, thus giving him time to heal and strengthen his legs. Each holiday, Ed would make a turkey dinner and give meals to the homeless. He loved being able to help the people in his community, especially the less fortunate.

In 1975, Ed and Barb sold the restaurant, and moved to a farm that they bought from his brother Mervyn 3 years earlier, on the 10th Concession of Greenock, just outside of Cargill. Here, their family lived in a train caboose for a year while they built their home with their own hands. Ed and Barb were very proud of the home that they had made for themselves. Meanwhile, Ed was working at Douglas Point doing construction, until he was 50 years old and retired. They had almost every type of farm animal you could think of on this farm. They had your typical farm animals such as cows and chickens, but also had ducks, geese, Chinese geese, pheasants and chihuahuas.

Ed and Barb stayed on the farm until Barb passed away in 2010. When she passed, it crushed him. Barb was his strength in his life, so losing his true love was very hard on him. He had a collie dog named “Lady” who kept him company and gave him the unconditional love that he so desperately needed at that time.

Seven months after Barb passed away, Ed actually flew in a plane for the first time in his life, coming out to visit Ross and Darlene on the farm in Saskatchewan. He had so much fun. He would drive the tractor raking hay and he would watch as everyone was working branding and needling baby calves to go to pasture, even helping out with the BBQ’s afterwards (to feed all the help).  He would go riding for hours on the quad, following Suzanne as she checked the herds on the many acres of pasture. One year he was out just in time to help with calving on the farm. Each year he would go out to Saskatchewan for a trip, he was getting to be a pro at flying (for his age).

Within several years, Ed had to give-in and move into Rockwood Terrace in Durham, where he stayed for a year, and then moved west to Saskatchewan in 2016, close to his daughter Darlene and her family. He lived at Yorkton Crossing for a while and then moved on to Yorkton & District Nursing Home.

Ed always loved being outside. In his younger years, he would attend the stock car races and he would be out cutting wood for the furnace or to sell some wood. In his later years, he cut wood but only for himself. He also liked going fishing and bringing the fish home, for his family to find them flopping around in the bathtub. However, one of his favourite times of the year was when a big snowfall would come, which meant he could get out his Ski-Doo snowmobile. When his kids were young, he would use the Ski-Doo to pull them around on the toboggans which was enjoyable for the kids, and he loved to hear their squeals of joy and laughter. He always enjoyed his trips on the snowmobile with his friends. Whenever one of his family or friends would come over with their snowmobile, they always had to race to see whose was the fastest. Cousin Ken Yule built/had a skidoo-caboose that the little kids got to ride in when the 2 families would go on the skidoo trails around the farm. There were big snowbanks that they would go over with the little ones screaming with joy. Coming in cold and having hot chocolate at the end of a good trail ride was the best part. He also enjoyed having the wee grandchildren sit on his knees as he drove the lawnmower around cutting grass and letting the kids steer.

If Ed wasn’t out cutting wood or on his snowmobile, you could find him in his garage working on old vehicles. He started doing this with Dick Evans and loved doing it. He would buy one, fix it up and sell it and do it all over again. One of his favourite cars that he owned was his 1915 Model T Ford car.

Ed was hardworking, caring, stubborn, but determined to never give up. He was the type who would give the shirt off his own back. He was opinionated and would tell you as it is, even when you wouldn’t want to hear it. He lived by the motto of “you made your bed, now lay in it”. He loved to sit and enjoy a coffee (normally instant coffee) with his friends and talk for hours. He enjoyed watching western movies or WWF wrestling when it was on. Ed loved to sit out under an awning or by an open window when it was thundering and lightning, and loved that fresh smell of rain and watching the storm.

In the 60’s and 70’s, Ed and Barb looked forward to the trips out west to go see his brothers Harvey and Terry and his sister Edith and their families or Barb’s brother and family in Manitoba. He was a jokester and loved pulling practical jokes on his friends and family. When he took his 1915 Model T Ford car to antique car shows, he found that kids liked to come up and touch it, which he didn’t like. To fix this problem, he hooked up a coil so that when the kids would touch it, they would receive a shock, and if mommy was holding their hand … she got the shock as well. That taught them not to touch his prized possession!

Ed’s health had been declining and on Saturday, January 8, 2022, Ed was surrounded by loving family as he passed away at Yorkton & District Nursing Home in Yorkton, Saskatchewan.  Loving father of Deby (Harold) Wood of Moonstone, ON, Darlene (Ross) Brindley of Foam Lake, SK., Sherry (Gerry) Schuit of Sundridge, ON and Angela (David) Kleist. Ed will be missed by his 10 grandchildren, 21 great-grandchildren and 3 great-great-grandchildren. He will be fondly remembered by his siblings, Harvey (Ollie) Yule of Kelowna, B.C., Terry (Sharron) Yule of Winnipeg, MB. Predeceased by his wife Barbara, brothers Earl, Thomas (Pete), Mervyn, and sisters Edith, Hazel, Myrtle, and his parents Thomas and Rita (Hetsler) Yule.

A private family service will be held at Rhody Family Funeral Home, Chesley. The funeral service for Ed will be livestreamed through Zoom on Saturday, January 22, 2022 at 1 p.m. The link for Zoom will be posted on Friday. The service will be recorded and will be available to view on the funeral home website in the days following. A celebration of Ed’s life will be held in the spring. Interment at Chesley Cemetery.

As expressions of sympathy, donations to the Canadian Cancer Society would be appreciated by the family.