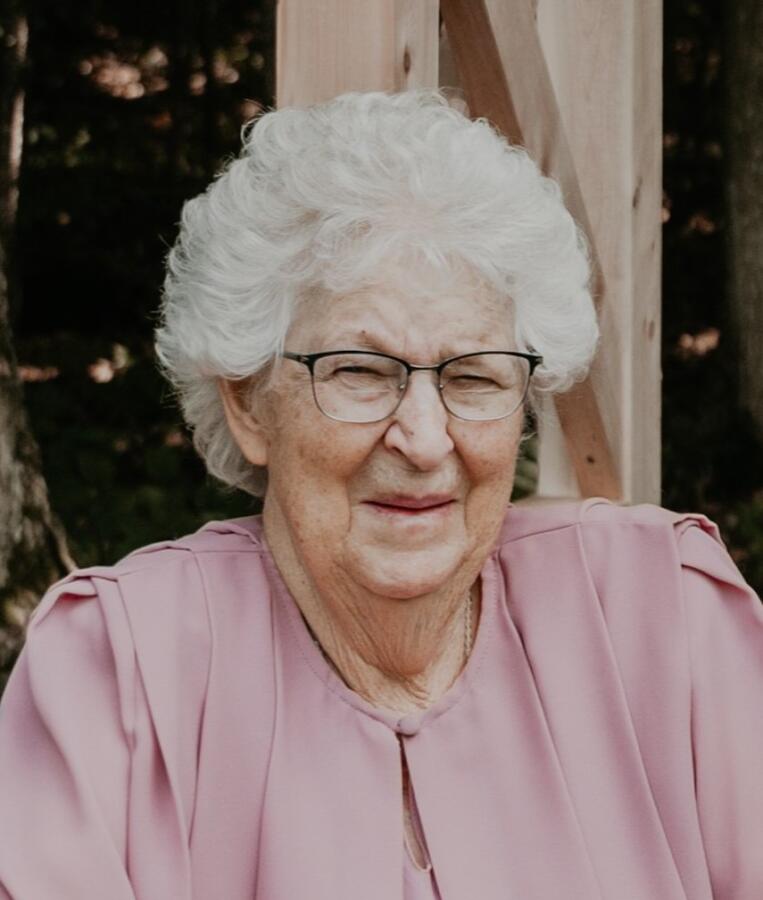 Marjorie Eileen Thompson was born into this world on October 13, 1935, to parents Thomas and Mary (Caldwell) Thompson. Eileen was the first-born child and was soon welcomed by Mary, Lloyd and the twins Jean and John. The Thompson family lived a mile west of Cargill on the 10th of Greenock, on a mixed farm. Eileen grew up helping around the farm with the cows, chickens, and pigs, where her love for animals began. Eileen attended Cargill Public School until grade 8, then continued to Walkerton District High School.

When she was in high school, Eileen worked at the Cargill General Store, and once she graduated high school, she worked at the Silverwood plant in Cargill. She didn’t end up working there long because of a young handsome man who swept her off her feet when she was just 18. Gordon Henry Brown and his father sold a horse to Eileen’s family. On June 26, 1953, Gordon volunteered to ride the horse to the Thompson farm. As luck would have it, Gordon did not have a ride home, so Eileen agreed to drive him back. They decided to attend a dance together that very evening and the rest is history. Eileen and Gordon were married on November 20, 1954, at the Anglican Rectory in Paisley.

As newlyweds, Eileen and Gordon bought and moved into Gordon’s father’s mixed farm, which ended up being the farm they would live on for their entire lives. It didn’t take them long to welcome their three sons Dan in 1956, Ron in 1959, and Jamie in 1964. With three young growing boys at home, Eileen would help with the many chores that needed to be done and would also work alongside Gordon and the boys baling and pitching off hay or cutting wood in the bush then help pile it. She still managed to have a full home cooked meal on the table that was steaming hot when the boys came in from a long day of work. Eileen was a true farm wife and an expert with the cows. She loved being with the herd, named each one of them and never wanted to get rid of the cows on the farm. The cows and calves all knew her voice.

Eileen and Gordon were very lucky that most of their families all lived within 10 minutes of each other. Together, they would routinely host the annual Thompson Christmas, picnic, and family reunion, as well as the Brown Christmas and summer get-togethers. At every Thompson family event, there was always a couple of tables dedicated for euchre tournaments. One particular day spent with the Thompson family sticks out in her boys’ memory. Eileen, Gordon, and the boys went over to visit Eileen’s brother Lloyd and his wife Marilyn, and the kids brought their bikes along. All the kids were playing cops and robbers on their bikes and rode them down the driveway towards the road. They thought it would be funny to fake a bike accident, so they all laid down on the driveway. Eileen and all the other ladies watched this happen from the window. The next thing they knew, Eileen ran out of the house, missed all the stairs on the front porch, landed on the lawn, got back up and tore down the driveway to find the kids were just playing possum. This was a prank that Eileen never ever forgot but it was a really funny story to tell over and over again!!

Eileen was a proud founding member of the Jackson’s Women’s Institute and was a member for over 55 years. She enjoyed the social aspect that came with the monthly meetings, and everyone would take turns hosting. There was one meeting that stood out to Eileen. It was her turn to host, and that happened to be the day that Gordon decided to spread manure in the field fairly close to the house before all the ladies arrived. She was not impressed, and she called Gordon “a stupid arse”, which led to even more laughs! 😊 Eileen and Gordon were also proud founding members of the Bruce County Heritage Association in Paisley. They were very involved in their community and enjoyed the many different friends they met along the way!

When Gordon was touring with his music, Eileen was the band’s number one roadie. She never made her way on stage, but instead, she supported them from behind the scenes. Eileen would buy a record, listen to the words, write it down line by line, and type it up so that Gordon and the band could sing it on stage. She also made sure to have lots of food for her favorite lead singer and the band when they would attend different gigs. Gordon would host many jam sessions in the driving shed, and she would cheerfully do lots of work to help out. She would prepare enough food buffet style to help feed everyone who came to listen or play or dance to the music. Her grandson Andrew continued to practice with his band in the driving shed, and even though the music they would play wasn’t necessarily her type, Nana would pull up a chair, maybe listen with earplugs close by, and watch them play. The band always appreciated the meal she made for them and looked forward to the next practice at the farm.

“Any pies, cakes, biscuits, buns or cookies?” – was a phrase often used when Gordon would finish his main course. Eileen ALWAYS delivered. If you knew Eileen, you knew that every time you went to their farm, she would always have the best meal ready when you arrived, with the most delicious dessert to follow. There was certainly never a shortage of food at the Brown farm. Her pies were so well known in the area that at her granddaughter Amanda’s stag and doe, Eileen’s famous Dutch apple pie was auctioned off for over $100! She enjoyed the many hours that she spent in the kitchen. She made preserves, pickles, and relishes from the vegetables she grew in her garden, including beans, cucumbers, and beets just to name a few. Eileen was passionate about her garden. One year, she planted a whole acre of cucumbers and used or sold most of them. She had a massive collection of mugs from all over the world and loved her Tupperware. She had a mug display in the music room and cupboards full of Tupperware. Eileen was also well known as a champion quilter. She loved quilting with her sisters and would enter local fairs with her homemade fudge and pies, and many beautiful quilts. She became the regional district grand champion, before entering the Royal Winter Fair in Toronto. All her children, daughters-in-law and grandchildren were lucky enough to be gifted at least one or two quilts, which they will cherish forever.

Eileen was a caring and warm woman, who was private yet proud, quiet, hardworking, and loved the simple country way of living. She seldom complained and she was happy with what she was given. Nothing meant more to Eileen than her family. She always would light up whenever she would talk about ‘her boys’. She was very close to her children and would do anything for them. When the boys brought their wives home, she was overjoyed to welcome three daughters into the family. A new level of pride came for Eileen when all her grandchildren were born. She was so proud of each of them and cherished every moment that she spent with them making wonderful memories. Eileen was lucky that she was able to meet four of her great grandchildren. When Gordon died in 2016, Eileen was never the same. Gordon was her soulmate, and to live without him was so hard for her. In January of 2020, Eileen moved to Central Place in Owen Sound, and when Covid hit, it was tough on her because she couldn’t see the people who made her happiest, her family. In November of 2021, she broke her shoulder and her hip and remained in the Owen Sound Hospital ever since. On the Tuesday before she passed, she was moved to Chapman House. This was the first time in two years that she was able to be surrounded by her whole family again. Eileen was an incredibly strong person and held on so she could enjoy the last family moments they were able to spend together. Her family takes peace knowing that she was reunited with her best friend and true love Gordon, on Sunday, April 24, 2022, in her 87th year, surrounded by her family.

Loving mother of Daniel (Tuulikki) of Mississauga, Ronald (Cathy) of Owen Sound and James (Liana) of Lake Rosalind. Eileen will live on in the hearts and memories of her grandchildren, Amanda (Ken Klages), Emily (Tony Delitala), Celina (Alex Kuntz), Andrew (Rebecca), Cory, Carah (Mackenzie Cughan) and great-grandchildren Cora, Eddie, Wally, and Lewis. Dear sister of Mary Teeple and Jean Albright. Sister-in-law of Marilyn Thompson and Margaret Raymond. She will be missed by the Brown family, and many nieces and nephews. Predeceased by her husband Gordon, her siblings John Thompson and Lloyd Thompson, and her parents Thomas and Mary Thompson.

Visitation will be held at Rhody Family Funeral Home, Chesley, on Friday, April 29, 2022, from 5-9pm. Masks are preferred as per the family’s request. An immediate and extended family funeral service will be held at 11:00 am in the funeral home on Saturday, April 30, 2022. Interment in Lovat Cemetery at a later date.

In lieu of flowers, donations to the Residential Hospice of Grey Bruce would be appreciated by the family.