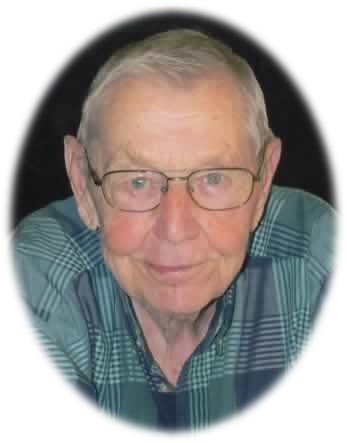 Elgin John was born at home on the farm, in Bentinck Township, on Sunday, July 17, 1927. He was the oldest child of Elmer and Sybilla (Yandt) Monk and was later joined by younger sisters Marjorie (1929) and Eleanor (1932). The Monk family resided on the 8th of Bentinck and did mixed farming. Elgin went on to attend public school in Habermehl, however his desire to farm exceeded his aspirations for further education, even though his prospective high school principal pushed for him to attend. Therefore, he did not pursue high school but instead returned home to help dad on the farm. Elgin enjoyed working with the horses and could often be found thrashing or ploughing in the fields.

In his early 20’s Elgin began working for Knechtel Furniture in Hanover and soon moved into town to board with his sister Marjorie. During this time Elgin loved to frequent local dances. On many of these occasions, Gid Tanner & His Skillet Lickers’ Down Yonder would be played. As soon as this piece was announced, Elgin, who was a great dancer in his day, would locate his favourite dance partner, a young lady by the name of Pearl Inez Kaufman, and ask her to dance. Thankfully, persistence paid off and she always agreed! 🙂 Together, they gracefully moved around the dance floor and in time began dating. A couple years later they were married on Saturday, December 6, 1952, at St. Peter’s Lutheran Church in Bentinck Township. The young couple settled in Elmwood for a couple of years, before purchasing a 100-acre farm on the 12th of Bentinck in 1955. Together with Pearl, they welcomed four sons, Brian (1953), Bradley (1957), Glenn (1964) and Gary (1966). As the boys grew, Elgin slowly grew the size of their farming operation, as he had more helping hands! 🙂 Elgin also worked off the farm, to help support his growing family and therefore worked at several factories before taking a job at the Feed Mill in Desboro. Back on the farm, Elgin spent a time raising wiener pigs before moving on to a cow/calf operation. When it came to his farm machinery, Elgin was a big supporter of Massey Ferguson. He thoroughly enjoyed life on the farm, and together with Pearl’s help remained there for over 60 years, until it was sold in April of 2013.

In his limited free time, Elgin was an avid hunter and fisherman. He loved being one with nature and getting outside with his hound dogs at his side, and hunting for local game. It should be noted he was a great shot as well…. which helps if you want to be a successful hunter! 🙂 Through his passion, Elgin acquired and built up quite the collection of guns through the years. He also bred, raised and cared for countless hound dogs, even selling a few, however, his favourite was a dog named King. I am told he was special, and Elgin loved to reminisce about these enjoyable times in his later years through storytelling. In addition to fishing locally, Elgin always looked forward to his yearly trip north, to Algonquin Park and Tea Lake, to fish for Lake Trout.

Elgin was a quiet, independent man who was always up for an adventure. He was organized and extremely gifted with numbers. He could perform difficult calculations with ease, without paper I might add. From a young age, Elgin enjoyed music. His grandfather, John, instilled that in him and he went on to play a bit of harmonica and violin in his earlier years. When it came to listening to music, Wild Irish Rose and Crystal Chandelier were two of Elgin’s favourites. He was a meat and potatoes man, never straying away from these staples, however he also had a soft spot for Fish & Chips, particularly from Norm’s in Hanover. Another treat was ice cream, with his favourite flavour being Maple Walnut. Luckily for Elgin, no one else in the house liked Maple Walnut, meaning he got the entire container to himself. Let’s just say he used this to his advantage many times! 🙂 Like many of us, Elgin also enjoyed a nice cold beverage, with Labatt products, especially Blue, being a favourite. He also liked his Daily Mail tobacco, which he rolled at home in vogue papers, for years. IT should also be noted that Elgin was very mindful with his money and therefore in time, he decided smoking was becoming too expensive and he quit cold turkey, literally ploughing it under (I am not joking).

Sadly, in the early 2000’s Elgin started experiencing some dementia. Surrounded by the love and support of family and friends, Elgin made the best of each day, and began to slow down. Television became a great source of entertainment with the news, Price is Right and Hockey Night in Canada being some of his favourites. In 2013, he and Pearl moved into The Village in Hanover, whereby they were both provided with further support. They further enjoyed each other’s company and socializing with friends and neighbours within the building. Unfortunately, Elgin’s condition continued to worsen, and he was moved into long term care in 2019. Thankfully, Pearl was close by, visiting regularly, and providing care and support when needed. Sadly, Elgin died suddenly, on Tuesday, March 1, 2022, in his 95th year.

A public visitation will be held at Rhody Family Funeral Home, Chesley on Sunday, March 6, 2022, from 1 p.m. until the time of the memorial service at 2 p.m. All are welcome to both visitation and service. Masks are mandatory. Spring inurnment in St. Peter’s Lutheran Cemetery, Bentinck Township.

In lieu of flowers, memorial donations to the Heart & Stroke Foundation or Alzheimer Society would be appreciated as expressions of sympathy.