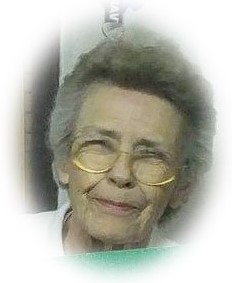 “Reading is a basic tool in the living of a good life.” – Joseph Addison

Fran loved to lose herself in a good book. In her earlier years, she enjoyed romance novels, with a Harlequin Romance being top on her list. In later years, it had to be a murder mystery. If she was asked, JD Robb was her go-to author. Fran could never get enough and as soon as one book was finished she was off to the Chesley Library for another. Her love of reading will never be forgotten.

Frances Gertrude was born on Thursday, May 6, 1937, in Morrisburg, Ontario, a small community on the St. Lawrence River. She was welcomed by her parents, Thomas and Lillian (Usher) Henderson, and was the eldest of three children. The Henderson family soon moved to Oxford Mills where Fran welcomed younger siblings, Linda and Thomas. Here she attended a one-room schoolhouse before moving to East York in 1951 to live with her paternal grandparents, Howard “Bernice” and Belle Henderson. She enrolled at East York High School and remained there until the day after her 16th birthday, May 7, 1953. School was not for her! After leaving school Fran took a job as an aid at East General Hospital.

In 1954, Fran was introduced by her neighbour, Dean Morphy, to a young man by the name of Ronald Edgar Henson. Ron ran an industrial baseball team at the time, and Dean played 3rd base. Fran and Ron’s first date was on Sunday, December 19, 1954, where they enjoyed a soda and great conversation at a local restaurant. As they say, the rest was history and the two lovebirds were wed at Hope United Church in Toronto on Friday, February 10, 1956. The newlyweds lived with Fran’s parents for a few months before getting their own place.

The Henson family began to grow in 1957 with the arrival of Ronald Jr. Four years later William was welcomed by his parents. The year was 1961. It was during this time, that the family moved out of the GTA, settling in Frenchman’s Bay (now Pickering). Their family was made complete with the arrival of Laurie in 1963. As can be expected, Fran kept very busy caring for her young family. She spent a few years with Muirhead Forwarding, a transportation company, before entertaining a variety of jobs in her later years.

In 1975, Fran, Ron, and their family relocated to Georgetown. Once again, Fran settled nicely into the community. The Mississauga Rail disaster occurred on Saturday, November 10, 1979, and once again Fran was there to help. She provided a variety of support to the dispersed families over the coming months, trying to make their lives a little easier and better. She was also known for offering her assistance with canvassing, helping a variety of charities through the years. When not helping others, Fran enjoyed spending time in her flower gardens, working with her roses. She also remained active by bowling in a women’s league during her time in Georgetown. In addition, Fran was a fabulous cook. When preserving, her Dill Pickles took first prize, however, she was probably better known for her delicious spaghetti sauce. Although no recipe was ever used, Fran’s finished product was always perfect!

Ballinafad became home for the Hensons in 1986. Here, she and Ron became involved in a darts league whereby they were introduced to many people within the community. When not spending time with friends and family at home, Fran and Ron loved to travel. Through the years they enjoyed many road trips together. One such adventure took them around the Great Lakes. They also explored Florida, California and took a 6-week vacation to explore all Alaska had to offer, just to name a few. When not travelling throughout North America, Fran and Ron also experienced Hawaii and areas of Europe.

After Ron’s retirement, the couple moved north and soon called Chesley home. The year was 1996. Life further slowed down, whereby Fran enjoyed reading more and taking in any cooking shows she could find on television. When it came to food, Fran loved her bread pudding and was particularly fond of fresh raspberries. Her drink of choice was a dry Martini, with a couple of olives of course!

Sadly, tragedy struck the Henson family in 2006, when Bill died suddenly from a heart attack. He was 45. Understandably, Fran was crushed by his death and it set off her slow decline in health in recent years. Although her body began to fail her, she continued to show her love and care for those around her, particularly her family. The fact that Fran was a tad bit stubborn and feisty didn’t hurt the situation either. She made the best of every day and interaction and lived out her remaining years surrounded by the love and support of her family and friends.

Frances passed away with family at her side at Grey Bruce Health Services, Owen Sound on Monday, October 4, 2021 in her 85th year.

In respecting Fran’s wishes cremation has taken place and a celebration of her life will be held at the Acton Legion (15 Wright Ave.) on Saturday, October 30, 2021 from 2 – 5 p.m. Those attending will be required to provide proof of vaccination and photo identification upon arrival.

In lieu of flowers, memorial donations to Cancer Assistance Services of Halton Hills (CASHH – cancerassistance.org) would be appreciated as expressions of sympathy.