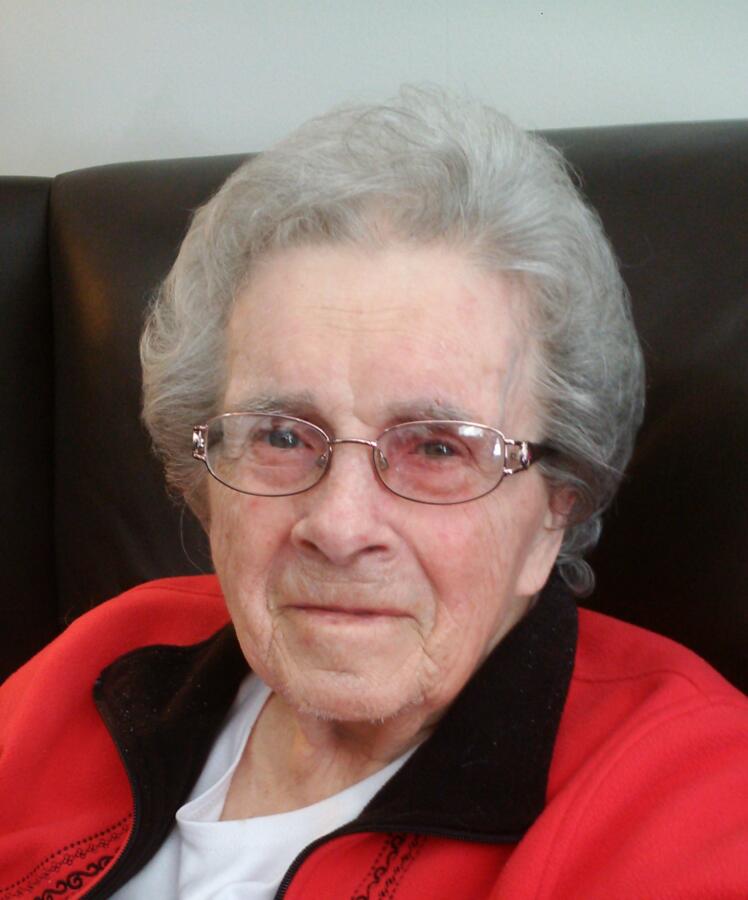 Grace Cooke was welcomed into this world on November 9, 1930 by parents William and Mary (Mole) Cooke. Grace was soon welcomed by younger siblings Margaret and twin brothers Sam and Bill. The Cooke family grew up in Lucknow and attended grade school there. Once Grace finished grade school, she worked at the corner store.

While spending her time working in Lucknow, she met a young man by the name of Harry Ernest Wilkins. Harry swept her off her feet and they were soon married on October 1, 1949 at Blakes United Church in Lucknow. The two bought a farm on a dead end road just outside of Chesley which they eventually turned into a dairy operation. The property happened to be right next to Grace’s parents who had also moved up this way. Grace and Harry built their life together on the farm and soon became parents to their first child Ron, and shortly after had Patricia, Dave and Don. Grace stayed home to focus on her growing family and the farm. She and Harry made sure to teach the value of hard work to their children, helping with the many duties, tasks and endless chores that needed done at the farm. When Grace and Harry had enough of dairy farming, they sold the quota and the cows and bought a beef herd. Apparently, that and the children didn’t keep them busy enough, so they started a new venture – Wilkins Small Engines. Harry of course selling and fixing the machines while Grace manned the phones and did the book work. Although the machines were usually delivered by a transport truck, there were times when someone had to head to the city to pick some up. Grace was sometimes the elected individual, whether or not she wanted to be.

When Grace and Harry sold the dairy herd, they bought a car, a picnic table that folded down to fit in the trunk, packed a picnic basket, a tent, and hit the open road. They set off for a road trip to the West Coast with Dave and Don; camped all the way out and back. Grace was one of the thriftiest people out there. So much so that if there was anything lying on the side of the road, they had to stop and pick it up. She couldn’t leave anything left aside, feeling that there was always a use for items, even when it never got used once it got back home!

Grace had many talents – some would say cooking was not one of them. This could be because she didn’t want to tear herself away from her crafts long enough to cook any sort of fancy meals. Harry used to get just a bit irritated when there was “another quilt” set up in the kitchen.  Grace was such a generous person and she certainly wasted nothing. She donated so many of her creations to help others. She had a friend with connections to send items overseas; but she also donated her time and services locally. She could often be found knitting socks, quilting or making tartan flower pins all to be donated to raise money. She also made finger puppets and donated them to the lab for the kids. She was an avid member of the Malcolm Women’s Institute and Chesley Hospital Auxiliary. She volunteered her time doing palliative care in the Chesley area and was involved with 4-H teaching homemaking skills.

One of her hobbies that some might not know is that she enjoyed hunting deer. She was out every year and loved every second (not sure how many she shot, but she always showed up). If you were lucky enough to be a neighbour of Grace’s, you knew that you couldn’t get away with anything with Grace being the neighbourhood watch! She knew every single thing that was happening on their dead-end road, even though sometimes she got herself into trouble with this. The story goes that Grace noticed a strange vehicle going into the neighbour’s property, so off she went to interrogate these individuals to later find out that the strange vehicle was actually family members visiting! The neighbours always knew their properties were safe with Grace watching over them! 😊

Grace had many wonderful memories in her life, however, she did have her hard times. She had experienced a lot of close losses in her life, losing her son Ron at the young age of 25 in 1976 and her other son Dave in 2008. No parent should ever have to experience losing not one son, but two, but she leaned on her family for support. She lost her biggest support and best friend, Harry, in 2012. Going through so much loss in a life is hard on anyone, Grace persevered.

Family was everything to Grace. She loved her children, grandchildren and great-grandchildren and was so proud of everything they accomplished. She would teach anyone who would sit still long enough to quilt, knit, etc. at any time or any place. Grace lived her life doing what she loved the most, using her time and talents to help others. She never wanted rewards for anything that she did and was always pleased with what she had. Grace was there to support her family through the good times and the bad. She was never afraid to share her opinion and tell you how she really felt. She would lend an ear and try to steer you in the right direction, or at least the direction she thought you should go. Grace had a big personality but a bigger heart. She wasn’t an affectionate person, but you knew she would walk to the end of the earth for her family.

Grace was lucky to be at the farm until after Harry passed. She stayed there until she no longer could, moving into Elgin Abbey, where she continued to volunteer as a member of the resident’s council and by the way, the neighbourhood watch continued while she was in the home – still looking out for wrongdoers . Grace was pleased that she made it to her 91s t birthday. In the last few weeks, her health started to deteriorate and she passed away on Thursday, April 14, 2022 at Elgin Abbey in her 92nd year.

Visitation will be held at Rhody Family Funeral Home, Chesley on Friday, April 29, 2022, from 12 noon until the time of the funeral service at 2 p.m. Inurnment in Chesley Cemetery.

Memorial donations to Chesley Hospital Foundation would be appreciated as expressions of sympathy.