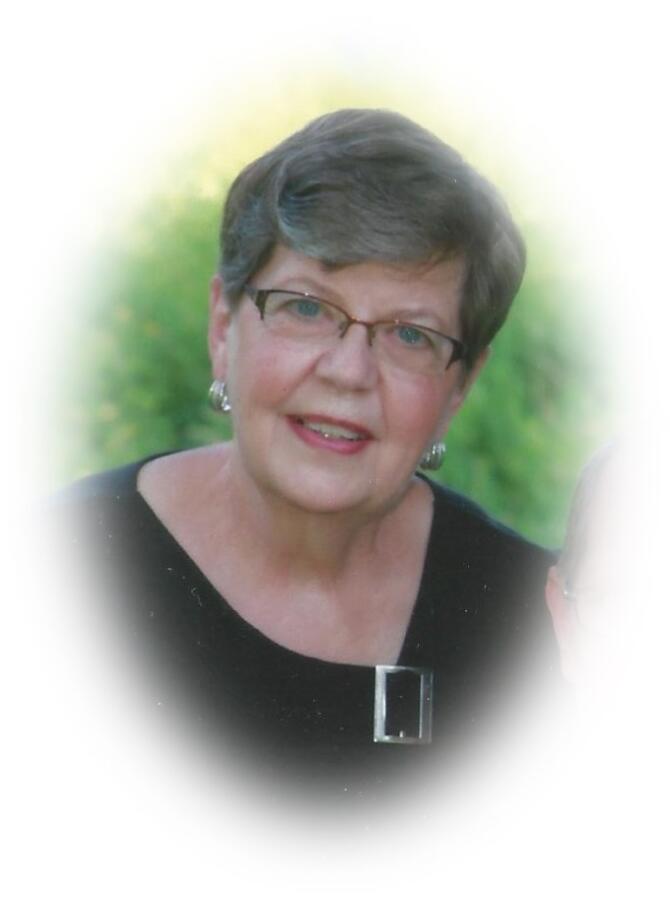 Gwendolyn Ann was born to proud parents, Lorne Alexander and Lillian Euphemia (Hall) Trelford at home, on Lot 5N, Concession 9 in Derby Township, on Tuesday, August 1, 1939. She joined her older brother Earl (1938) and the family was later made complete with the arrival of David in 1945. Gwen grew up on the generational Trelford family farm located on Bruce Rd 17, west of Tara, just outside of Invermay. Here, the family mixed farmed, before concentrating more on dairy in later years. In 1945, Gwen began school, attending S.S. #7 Arran Township (Invermay). She followed that by enrolling at Chesley District High School where she received the Home Economics Proficiency Award in Grade 12. While in school, Gwen caught the eye of an older student by the name of William “Harvey” Scarrow. The two began dating in 1956 with Gwen going on to graduate from high school in 1958.

The following year, she attended Teacher’s College (or Normal School as it was called at the time) in Stratford. Upon completion of her schooling, Gwen’s first job came at McCowan Rd. Public School in Scarborough in the fall of 1960. In her first year, she made $3,300. Indeed, good money at that time. Following the completion of the school year in 1962, Gwen returned home to Tara. Weeks later, she and Harv were wed at Christ Church Anglican in Invermay on Saturday, July 21, 1962. They traveled to Ottawa for their honeymoon before returning home and renting an upstairs apartment from Mrs. Shannon. Gwen and Mrs. Shannon, a widow, became very close in short order. It could be said, she eventually became like another mother figure to Gwen.

From 1962 to 1966, Gwen taught at Tara Public School, before making the move to the newly constructed Arran Tara Elementary School in 1967, where she taught primarily kindergarten through Grade 3. On Saturday, March 8, 1969, Gwen became a proud mother to not only one, but two healthy baby boys. David and Chris made their safe arrival at 7:47 a.m. and 7:48 a.m., respectively, and as can be imagined, kept Gwen very, very busy for the first several months. The following year the Scarrows built and moved into their new home located on River St. in Tara. Here the boys, along with their parents, welcomed their younger sister, Shannon on Wednesday, June 20, 1973. Gwen remained at home with her young family, supporting them at every turn.

In the fall of 1981, Gwen returned to the kindergarten classroom and again settled into her routine. Although obvious, she loved working with the children. Her appreciation of crafts also made for much fun in her young classrooms. She truly loved her students and was often remembered for her fabulous penmanship. Although she formally retired in 1998, Gwen continued to supply teach and volunteer at the school, until 2000. Her teaching career spanned forty years, and in many instances, Gwen taught three generations of Tara residents. What a tremendous accomplishment!

Away from the classroom, Gwen had many passions and interests. She loved sewing, crafts, gardening, scrapbooking, and knitting. Together with Harv, the two spent much of their retirement traveling to local craft shows and selling their creations. Their business, Country Mouse, took up their entire basement, as Harv enjoyed woodworking and making macrame lawn chairs. Gwen on the other hand did a lot of knitting, making countless dish cloths, and stove hand towels. Gwen was also known to knit a variety of items for in-need premature babies. Her talents with needle and yarn were endless. Every spring, Gwen was keen to get outside and into her backyard. She loved watching the new growth rise from the ground and spent a great deal of time working and manicuring her gardens. They were always beautiful, and picturesque. In fact, the images and pictures of them were so remarkable, that she sometimes had to convince people they were really her gardens! Traveling was another interest of Gwen’s. From her family camping and fishing adventures with Harv, the kids, and her parents at Manitoulin Island with the trailer, to more recent travel to the likes of the Dominican Republic, Cuba, Mexico, Maine, Alaska, Florida, Washington, Ireland and Arizona. In fact, for several years Harv and Gwen called Arizona home during the winter months, enjoying the warmer temperatures. When Harv was no longer able to travel, Gwen often set out on the next adventure with her childhood friends Doreen McNain and Carol Evans.

Gwen was also very active within her community. She was a proud member of the Tara Horticultural Society and gave of her time with the Arran Tara Agricultural Society, with the fall fair a staple on her calendar. Gwen was a faithful member of Tara United Church, rarely missing a worship service. She was also active with the United Church Women, always willing to give of her time and talents. Her children often joked that Gwen spent four days a week in her retirement at the church. She enjoyed cooking, knitting, and even exercising at her second home, always enjoying her company and the conversation. Back at home, Gwen religiously watched every episode of Wheel of Fortune and Jeopardy. She enjoyed frequent game nights and dinner with long time neighbours and friends. She loved the music of Ann Murray and often read a variety of popular fiction and biographies before bed. Gwen was particularly fond of Chapman’s Ice Cream and was usually quick to add, “it’s local!” Those close to Gwen would also have known of her mouse fetish… yes, you read that right! If the name of her craft business, Country Mouse, didn’t give it away, just ask her kids. Gwen’s collection of the popular rodent was impressive!

Gwen was a caring, loving woman, who always gave freely of her time. She was patient and absolutely loved working with children. As a teacher, the fact that she was empathetic, very organized and tidy didn’t hurt either. Right kids? 🙂 Gwen loved her family dearly, and she would do anything to support her children and their families. She always enjoyed catching up with her friends, whether it be connections from her childhood, neighbours, community involvement, colleagues, or even former students. Gwen always made time for these important conversations.

Gwen remained in the family home until 2017, whereby the difficult decision was made to downsize. Although challenging for anyone in Gwen’s position, she just moved down the street into smaller accommodations. Sadly, Gwen’s 40-year fear was coming to fruition, and she began experiencing the effects of dementia, similar to that of her mom before her. She managed quite well within her own environment, however in the last few years her condition gradually declined. Last October after a bad fall and rapid decline in her health, Gwen’s family made the difficult decision to move her to Windsor, so she would be closer to them.  Gwen passed away surrounded by her loving family, at The Village at St. Clair, Windsor on Wednesday, June 15, 2022, in her 83rd year.

Loving mother of David and his wife Diane of Windsor, Chris and his wife Marilyn of LaSalle, and Shannon and her husband Brock Myles of Alexandria, Virginia. Cherished grandmother of Megan, Julia, Carsen, and Kennedy. Gwen will be dearly missed by her brother Earl (Donna) Trelford of Hanover and sisters-in-law Jane Berry & Karen Trelford both of Kitchener, as well as many cousins, nieces, and nephews. She was predeceased by her husband Harvey (2011), brother David Trelford, and her parents Lorne and Lillian (Hall) Trelford.

Gwen will also be dearly missed by many close friends and neighbours; the family sincerely thanks them for the love and support she received. Gwen will be remembered as a proud lifelong resident of Tara who truly loved her community. The family also thanks the Colchester staff at The Village at St. Clair, for the excellent care and kindness given to Gwen. These acts of kindness will never be forgotten.

Visitation will be held at Rhody Family Funeral Home, Chesley on Monday, July 4, 2022, from 4 – 7 p.m. where a memorial service honouring Gwen’s life will be held on Tuesday, July 5, 2022, at 1 p.m. Inurnment in Hillcrest Cemetery.

In lieu of flowers, donations to the Tara Horticultural Society or Tara United Church would be appreciated as expressions of sympathy.