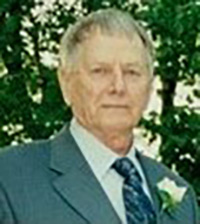 Harold was a kind, honest and gentle man, blessed with amazing patience.

Harold absolutely loved life on the farm. Whether it was stories from his younger days or more recently living through his family’s stories of their current experiences, if the farm was mentioned he was all ears. Thankfully, many of these experiences and stories will live on through his children and grandchildren for many years to come.

Harold John Louis was born at home on the farm, on the 8th of Brant, on April 20, 1925 to parents Harvey and Anna (Misch) Wilkin. His only sibling, Helen was born four years to the day, in 1929. Harold attended school at S.S. #6 in Brant Township. Following school he was introduced to beekeeping when he took a job in Pinkerton working for Mr. Garland. This became a life long passion for him as he continued to be an active beekeeper into his 70’s when he was forced to give it up as he developed an allergy to bees. Harold then took up farming full time working with his father on the family farm. In the early years Harold learned a variety of skills from his father that remained with him throughout his life.

Harold’s farm operation included a bit of everything like most farms did in those days, a variety of livestock and a large garden. Harold and Isabel supported each other, and that was all that mattered to Harold. He spent a number of years doing mixed farming before turning his focus to beef. Life on the farm was a family affair and everyone had their jobs. As well as farming Harold spent time as a salesman for Forney Welders and other shop equipment. Over time Harold became knowledgeable at various trades and became an accomplished handyman. If something needed to be done around the farm, Harold was sure to try his hand at it. Construction, welding, electrical… you name it, he did it. Like most of his era, Harold knew the importance of keeping things as you never knew when you might need them.

When time allowed it, Harold enjoyed woodworking, hunting and fishing. He was also quite the dancer and enjoyed being hand in hand with his beautiful bride moving gracefully around the dance floor. The kids have many fond memories of their dad. The stories confirm just how loving and creative of a man he was. Harold loved animals, those he cared for while farming and those he valued as companions. Farm neighbours and extended family were very important to him. They often assisted each other with farming activities.

In the early 90’s Harold and Isabel moved off the farm and into Hanover. He continued to go to the farm on a regular basis to lend a helping hand where ever he could. While Harold was a true home body, retirement did provide him the opportunity to do some roaming. He experienced Northern Ontario and Algonquin Park, Cleveland, a motorhome trip to St. Louis, a road trip to Winnipeg, time at the Sweiger Cottage in Pike Bay, and the times at Point Clarke just to name a few. Harold enjoyed watching the news and reading the newspapers. He always looked forward family and friends visiting and joining them in their home for meals and fellowship. Everyone knew they were always welcome.

Harold’s faith played an important part in his life as he was a life long member of the Lutheran Church. Through the years he assisted with a variety of tasks, which included leading Sunday School, serving as a member of the church council and overseeing a church addition in the 1960’s. In more recent years, when his health no longer allowed him to attend in person, Harold tuned in every Sunday morning via television, never missing a Sunday.

After 27 years at their home in Hanover, Harold and Isabel moved to McVean Lodge in 2018. There, they continued to enjoy constant interactions with family and friends, never wanting to miss out on an occasion or a new development within the family. Sadly, Harold suffered a stroke a week before he died. Although limited physically during this time, Harold enjoyed the constant love and support of his family. Stories were told of years gone by, there was laughter and tears, and even some Facetime to connect with those that could not visit due to the pandemic. Harold loved his family dearly, and they knew it. He passed away on Monday, September 21, 2020 in his 96th year with family by his side. His great life and legacy will now live on in the stories and memories of his beloved family.

A private funeral service will be held at St. John’s Lutheran Church, Elmwood on Friday, September 25, 2020 with interment to follow in Hanover Cemetery.

In lieu of flowers, memorial donations to SickKids Foundation would be appreciated as expressions of sympathy.

Brenda and Mary Ann and families, so very sorry for your loss of your father Harold. You are in our thoughts and prayers.

Our sincere and deepest sympathy to the entire Wilkin family.

Sorry to hear of Harold’s passing. Such a caring man – so many happy memories. Sending our love to Isabel and family. Condolences from the Koenig.

Our sympathy to all of you in the loss of a great man, he will be missed.

The Family has lost a fine example of a caring citizen Father, Grand-Father and so many other things done in the Hanover – Elmwood area. My family has many fine memories of his generosity and love as part of the Wilkin Family. Sincerest Condolences from Stan McLean, Owen Sound.

My condolence to the Wilkin family.

Deep and Sincere Condolences to the Wilkin Family. We trust you will draw on the treasured memories of Harold you have in the days and years ahead. He was a kind,gentle caring man who loved his family and Community. He lived his faith !

Wishing we could be there today to say goodbye to my Grandpa Harold. He is very loved and missed.

Hugs to the whole family. It’s really hard to lose a parent. I know how loved he was.

Deepest sympathy to the entire Wilkin family.
We are thinking of you today as you celebrate the wonderful life he had.

So sorry to hear this he was such a kind and gentle man. Our thoughts are with the family

Offering our sympathy to you all as you remember and celebrate Harold. Thinking of you all during this difficult time.

So sorry to hear of your dad passing away Janice . I know that you and your family will miss him so much. All of us at Dawnview knew from your stories that he was a very special dad and grandpa .
We are all thinking of you.
Sincerely Betty Duncan

Thinking of the whole Wilkin family during this difficult time. XO

We were very sorry to hear of Harold’s passing. Having worked for many years at Dawbview School, we heard many stories about Janice’s dad and after we retired we lived near them on 2nd Avenue. His long life will supply the whole family with many happy memories. Our condolences to the family. Lorraine and Al Morrow

Our sincere condolences to You and your family

Uncle Harold was a man of many talents….a very successful farmer, very skilled at working with wood, mechanically inclined and the list could go on. He also taught many other lessons…patience, kindness, compassion, thoughtfulness …and THAT list could go on and on as well. He always THOUGHT before he spoke…and at times the thought process went on for a bit……but if more of us would put THAT trait into action our world would be a better place. He was a good man, he will be missed and all of us are diminished by his passing. RIP Uncle Harold and to his family, please accept our most sincere condolences.

Our sincere condolences to you and your family

Our sincere sympathy and heartfelt condolences to Isabel and family..he will be dearly missed by his close knit family..the great memories will last forever…thinking of you

Our condolences to the Wilkin family. Harold was a devoted family and community member.

So sorry for your loss, Harold was a very kind and thoughtful man, thinking of you all.

Sincere condolences to all the family.

Thinking of all of you, during this sad time…

Extending our most sincere sympathy to Aunt Isabel and family on the passing of Uncle Harold. He will be truly missed. Heaven has gained an amazing angel.

Our sincere condolences on the loss of your husband, father and grandfather. Our thoughts and prayers are with you.

It is with heavy hearts that we send our sincere sympathy to all the family.I spent many summers on the farm helping with the little kids at that time and learning many household skills. (i.e. making jello) lol. Uncle Harold teased me about that all my life. He was always very kind and patient and he loved his family more than anything. He will always remain in my heart.
Carol and Reg

Sorry for your loss.

Very sorry for your loss. It was always a real pleasure to chat with Harold. He was a very thoughtful and caring gentleman. He was very knowledgeable and always had lots of interesting ideas about farming. He was passionate about his family, the farm and his church. Our thoughts are with you.