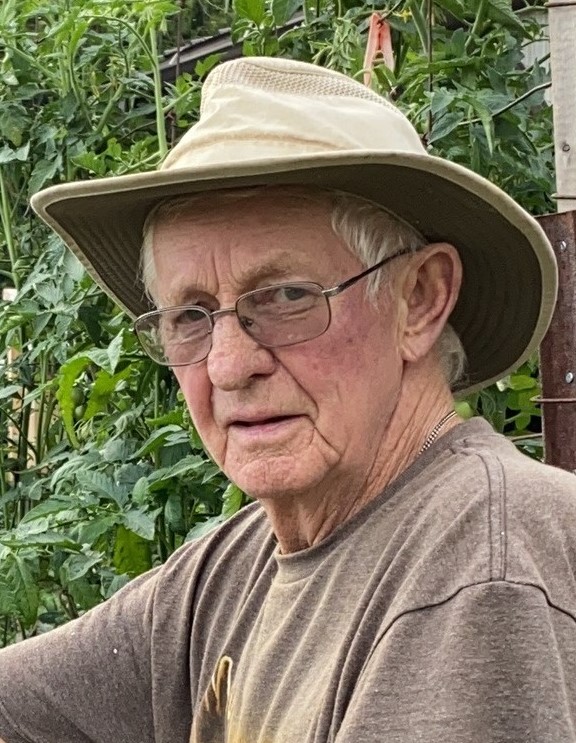 “You can take the boy off the farm,

but you can’t take the farm out of the boy.”

Harry loved life on the farm, from his early days on the 9th line of Amaranth with his brothers to recent years watching wildlife in his backyard. He was truly a farmer and cowboy at heart!

Harry Edward was born on Monday, September 16, 1946, in Milton to parents Gordon and Ruby (Andrews) Price. He was the youngest of four, joining older brothers Fred (1940), Jim (1941), and Doug (1943). After a short stop in Alliston, the Price family settled on a farm on the 9th line of Amaranth, west of Shelburne. He attended a one-room school on the 10th line before trying his hand at high school. Let’s just say Harry was more drawn to the farm and soon returned home to help his parents and brothers.

In 1966, Harry was helping a neighbour with their chores when he was introduced to their daughter, Norma Elizabeth Armstrong. The young couple hit it off immediately and they were married the following year on Saturday, November 4, 1967, in Corbettown, at the United Church manse. Once married, Harry and Norma rented a farm on the 25th Sideroad in Amaranth for a year before relocating to Georgetown. Together, the young couple welcomed their son Robert in 1968. Sadly, their second son, Dwayne died at the age of five days, which was a big setback for their family. The Price family was made complete with the arrivals of Kevin in 1970 and Chadwick in 1973.

In 1970, Harry began working for Die-Mold Tool Ltd. in Georgetown. The following year he began his apprenticeship and also purchased their first home, a wartime house in Acton. Harry began upgrading the house immediately which included hand digging the basement, shovel by shovel! On February 3, 1973, Harry was licensed as the 1st mold maker – die sinker in Canada. Harry remained with the company until 1976 when the Price family moved north. They settled in the old schoolhouse in Elmwood and Harry began working with his brother Doug, making ornamental railings. P & H Railing was located in a shop behind Doug’s home, and Harry and Norma bought a vacant lot, two doors down from Doug in 1977. He built their first house and was very proud of this accomplishment. In the years following he surrounded their home with beautiful gardens and later expanded it with an indoor pool in 1989.

In 1981, Doug, a boilermaker by trade, and Harry acquired A. Schonstrom Co. Ltd. in Walkerton from Tony Schonstrom. Together, they renamed the business, Price Schonstrom, and manufactured and shipped stainless steel production equipment across Canada. Doug concentrated on management and Harry was hands-on, on the floor. They knew their roles and complimented each other well. Harry was a very proud man and dedicated many hours to his work. He was a perfectionist and had high standards for his employees. Harry led by example and would never ask someone else to do something that he hadn’t done already himself. Many of the products made in Walkerton were shipped around the world, whereby Harry usually travelled to help with installations. They supplied many industries including food processing, fisheries, lumber finishing, and even breweries. These installs took Harry all over the world and to the likes of Russia, Hawaii, Belgium, Japan, South Korea, and the U.S, just to name a few. Harry could have easily been classified as a workaholic and worked hard each and every day. Even though the Prices’ sold the business in 2010, Harry remained dedicated to the company until his official retirement on June 1, 2012 – the same day Norma retired. At the end of the day, Norma arranged to have a limo pick him up (the first limo ride in his life), whereby he then drove to Durham to pick her up. To say they rode off into retirement in style would be an understatement! 🙂

In 1999, Harry and Norma bought a 40-acre parcel of land east of Elmwood. It was his sanctuary, and here he built his second home. Everything had his touch, even the retaining wall whereby he and Norma made over 100 hand-made blocks! This property offered him the privacy he loved and the space to establish his gardens. He built a workshop where he spent many hours working with his hands, tools, and wood. His beautiful creations created great satisfaction for both him and those who were lucky enough to receive his handiwork. If given an idea, Harry would make the product without a pattern or plan. He was always thinking about building or planting something. In their home, Harry’s talents can be seen everywhere, as he designed and created tables, trim, a kitchen, and even wall sconces. What a talent!

Harry was a quiet, private man, of few words. He could be a tad stubborn, like most of us, and had high standards for himself. Harry was active in the community as well as an active member of the Elmwood Lion’s Club. He was an instrumental piece of the construction of the current ball diamond fencing in Elmwood. Truly, his talents and craftmanship will be enjoyed by many for years to come.

In retirement, Harry and Norma enjoyed travelling. Through the years they enjoyed many trips south to a variety of Caribbean destinations. In 2013, they explored the states of Nevada, California, Arizona (which Harry loved), and everything in between. The following year, it was three weeks in B.C, exploring the beautiful Okanagan Valley. In 2015, they purchased their first travel trailer and headed east. P.E.I. was a favourite, as was the lobster… yum! Their last big trip was in 2018. Remember a farmer at heart… he and Norma travelled to Saskatchewan to see the fall harvest. They loaded the trailer and headed west. While there he literally spent hours sitting on the side of the road watching the big machines work. In fact, on one occasion the workers approached the truck to make sure they weren’t in need of assistance… imagine! Back at home, Harry loved watching sunrises and sunsets from his living room. And then there was the wildlife… again he could spend hours taking it all in!

When it came to gardening, Harry grew everything from seed. He also knew a nice tree when he saw one. In fact, the majority of the trees surrounding the Price home were originally rooted elsewhere. Harry would often spot them in the bush or on the side of the road, and then task himself with successfully moving and caring for them. Indoors, Harry thoroughly enjoyed the music of Charley Pride. In fact, he was the owner of an impressive collection of Charley’s records. He was also fond of music from Alan Jackson and Ricky Van Shelton. Harry was also an avid coin collector. On the television, it was usually news or a good Western! When not watching a Western, Harry could usually be found reading one! 🙂 He loved to expand his knowledge and was always eager to learn, no matter the topic. When it came to treating himself, Harry had a soft spot for fresh Elderberry pie… and a vodka and OJ wasn’t bad either! 🙂

Sadly, in 2019 Harry’s health began to decline. Although limited physically, Harry still enjoyed his oasis daily and was aided greatly by the love and support of Norma. He wanted to remain at home and his loving wife granted him that opportunity. She remained at his side, until his last breath, when he passed away suddenly at home, on Tuesday, January 11, 2022, in his 76th year.

Beloved husband of Norma (Armstrong). Proud father of Rob (Tracy Thynne) of London, Kevin of Seoul, South Korea, and Chadwick of Kitchener. Harry will be dearly missed by his brothers, Fred (Ann) of Walkerton, Jim of Hanover, and Doug (Doris) of Elmwood. He will be fondly remembered by his many nieces and nephews as well as the entire Armstrong family. Harry was predeceased by his infant son Dwayne, sister-in-law Mary Price and his parents Gordon and Ruby (Andrews) Price.

A private memorial service celebrating Harry’s life will be held on Wednesday, January 19, 2022, at 1 p.m. A recording of the service will be available on the funeral home website on Friday. Inurnment in Elmwood Cemetery.

In lieu of flowers, memorial donations to the Chesley Hospital Foundation or Heart & Stroke Foundation would be appreciated as expressions of sympathy.