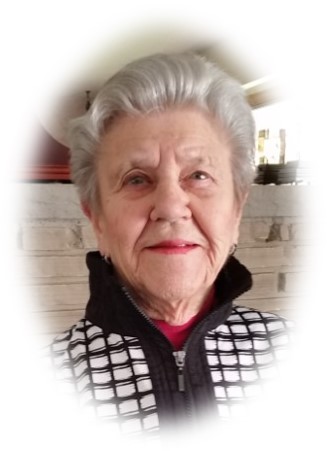 Inez was born at home on the family farm, in Saugeen Township, on Sunday, December 20, 1925. She was welcomed by her parents, William “Joseph” and Mildred (Patterson) Riebel, and was the oldest of four girls, Inez, Ella (1927), Lois (1930), and Gwenn (1944). The Riebel family resided near Lake Huron and operated a mixed farm. Sadly, the family home burned down when Inez was around ten and the family relocated to the 6th of Saugeen. Here, she finished public school before boarding in Port Elgin to attend high school.

Following school, Inez worked a few odd jobs locally before venturing off to the Ottawa area for a couple of years where she enrolled in a stenographer’s course and later found work in a local bank. She eventually returned to Bruce County where she reconnected with her friend Dorothy (Thede) Crawford. In time, Dorothy introduced Inez to her brother-in-law, William “Kenneth” Atkinson Crawford. Ken had recently returned from the war and was looking to return to normal life. The two soon hit it off and after a short courtship were married in Owen Sound on Saturday, March 15, 1947. The newlyweds resided in Owen Sound where they welcomed sons Bryan (1947) and Robert “Bob” (1950). In 1952, the Crawford family purchased a 100-acre farm on the 15th Sideroad in Arran Township, between the 8th and 10th concession. The family continued to grow with the arrival of Kaye (1955) and Carol (1960). Inez kept very busy caring for her young family in addition to helping Ken where she could on the farm. The mixed farm kept everyone busy, and there was little downtime.

In her limited free time, Inez enjoyed keeping busy. She was an avid gardener and enjoyed spending time working in her flowerbeds. She enjoyed sewing, quilting, cooking, canning, and playing a variety of games, especially Dominos, Scrabble, Cribbage, and Euchre. Needless to say, Inez loved to win, and she wasn’t afraid to compete. When in the kitchen, Inez was well known for her pies, especially raspberry, oatmeal cookies, and potato salad to name a few, but honestly anything that was put together by Inez’s hands was delicious. When it came to her creations, Inez enjoyed showcasing (and selling) them at a variety of local craft fairs.

After formally retiring in 1981, the Crawfords called Market St. in Tara home, and life started to slow down a bit for both Inez and Ken. They began to travel more and experienced Canada coast-to-coast. Likewise, they spent a dozen winters in the sunny south, calling the area of Zephyr Hills, Florida home. Here, Inez loved to get out and socialize and always enjoyed the opportunity to get dressed up and look good! Although not much for television, she had her favourite programs. Wheel of Fortune, Jeopardy, and taking in a Blue Jay’s game, were must-see TV. Inez also had a soft spot for dogs and enjoyed their company. Retirement also meant trying new things, and golf was one of them for Inez. She soon excelled and kept up the pastime while physically able, always pushing herself.

Inez was a kind, proud woman who helped wherever she could. She was a forward thinker, a go-getter as you would say, and never hesitated to take a risk… including playing the lottery regularly as well as Bingo. Inez was known for her heavy foot, and was often seen by neighbours speeding into town. Thankfully, her strong morals and values were passed down to the generations that followed her, and for that, we can all be thankful.

Sadly, Inez’s world was turned upside down in 2004 when Ken passed away. Surrounded by friends and family, she made the most of every day and relied heavily on her strong faith. She was a faithful member of Arkwright United Church and later Tara United Church where she was very active within the UCW. This meant that any event at the church usually involved Inez. She loved to help where she could and didn’t mind the social aspect either, including the semi-annual meat pie fundraiser.

In more recent years, Inez loved to spend additional time with her grandchildren and great-grandchildren. She was also eager to learn of the most recent happenings in their lives and was so proud of all of them. Sadly, a stroke in 2018, led to Inez’s downsizing whereby she moved to Port Elgin into Elgin Lodge for further care. Months later her health declined further and she soon called Elgin Abbey in Chesley home, where she lived out her final days supported by family and friends. Inez passed away at Elgin Abbey, Chesley on Tuesday, November 1, 2022, in her 97th year.

A private family gathering honouring Inez’s life will be held with inurnment to follow in Hillcrest Cemetery, Tara.

In lieu of flowers, memorial donations to Tara United Church or Tara Legion would be appreciated as expressions of sympathy.