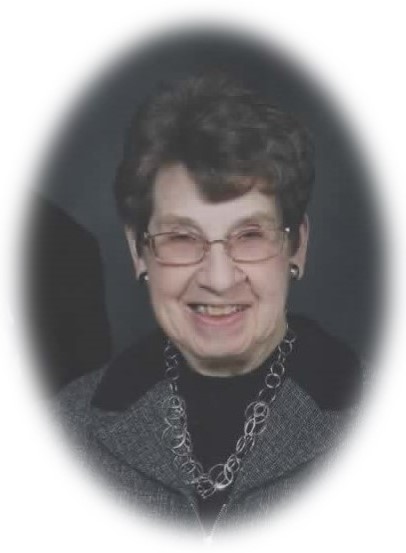 Jean Gladys was born on Thursday, March 1934 in Toronto to parents Nelson and Gladys (Damm) Whitehead. The family soon relocated back to Bruce County where they called Kinloss home for a short period of time before settling on a farm west of Walkerton on Bruce Rd. 2. The Whitehead family continued to grow with the arrival of Howard in 1935 and later sister, Ethel (1941). The children attended Johnson’s School, a few miles west of their farm. Following school, Jean helped her parents at home on their mixed farm and in time took a job in the food department at the Walkerton Hospital.

During her teenage years, it was common for Jean to attend local weekly dances. On one such occasion at the Louise Hall, Jean was introduced to a young man by the name of Walter Richard Atton. He must have been good on the dance floor as Walter made a favourable impression and the young couple soon began dating. They were wed on Saturday, May 29, 1954 at St. Paul’s United Church in Walkerton. Today, Walter jokes that he was United for a day! 🙂 Following their marriage, the newlyweds moved to the 12th of Brant and called Walter’s parents’ former farm home. Together they mixed farmed and settled into their life together.

In 1958, Jean and Walter welcomed their first daughter Susan. The Atton family continued to grow in the years following with the arrival of Mark (1963) and Janet (1967). In addition to caring for her young family, Jean helped Walter with chores around the farm whenever she could and also cleaned outside the home. She cleaned the doctor’s home down the road, Dr. Brown’s Dental office for several years, a few local homes, and eventually took on the job of caring for the Elmwood Community Centre as well. In the early 80’s, Jean worked as a short-order cook at the Elmwood Hotel for a period of time, which didn’t impress Mark as she only worked weekends and therefore it affected his social life! 🙂 When at home, Jean ran a tight household and was always in control. Everything had a place, and everyone had tasks to complete!

When not busy at home or caring for her children, Jean remained active within the community particularly with the Malcolm Women’s Institute, Elmwood Chamber of Commerce, and her church, St. Mark’s Lutheran in Chesley. She enjoyed socializing and networking with the other women, and still attended Institute meetings as recently as prior to the pandemic. With the Chamber, Jean convened many meals and events through the years. She also did a lot of catering with the Institute as well! As a couple, Jean and Walter also enjoyed bowling, and for a period of time played in a league together.

When it came to hobbies, Jean enjoyed sewing, cooking, and even dabbled in ceramics. She also valued her time outdoors and loved to work in her vegetable garden. Although not big travelers, Jean and Walter traveled Canada coast-to-coast, as well as took in a few bus trips to the US. Back at home, the two loved to dance, and few Saturday nights were spent at home as they were often out on a local dance floor. Her music of choice? Well, old classic country and hymns of course!

In October of 1990, Walter and Jean began to slow down and left the farm and moved into Chesley. Although this was an adjustment for both of them, they soon settled into their new surroundings. Jean continued to give of herself and her time. She spent countless hours volunteering her time and talents at St. Mark’s. In addition to being an active member of the E.L.W. and altar guild, she served as a member of the Church Council for a period, and also acted as the caretaker. Honestly, Jean just wanted to help where she could and therefore volunteered and helped whenever needed. When it came to family, Jean thoroughly enjoyed family holidays and an opportunity for her entire family to gather under one roof and share a meal together. Countless memories were made through the years at these gatherings.

In recent years Walter and Jean’s age began to catch up to them, and it was decided that the house was becoming too much. So, in May of 2018, they made the decision to move to The Village, Hanover but didn’t sell the house until January 2019. At The Village, they enjoyed reconnecting with old friends and neighbours and made the best of each day. Sadly, Walter lost his soulmate and best friend, when Jean passed away suddenly on Tuesday, October 12, 2021 in her 88th year.

A public visitation will be held at Rhody Family Funeral Home, Chesley on Sunday, October 17, 2021 from 2 – 4 p.m. All are welcome! A funeral service honouring Jean’s life will be held at the funeral home on Monday, October 18, 2021 at 11 a.m. Seating is limited so if you would like to attend the service please call the funeral home (519 363-2525) to reserve a seat. Interment in Chesley Cemetery.

In lieu of flowers, memorial donations to St. Mark’s Lutheran Church would be appreciated as expressions of sympathy.