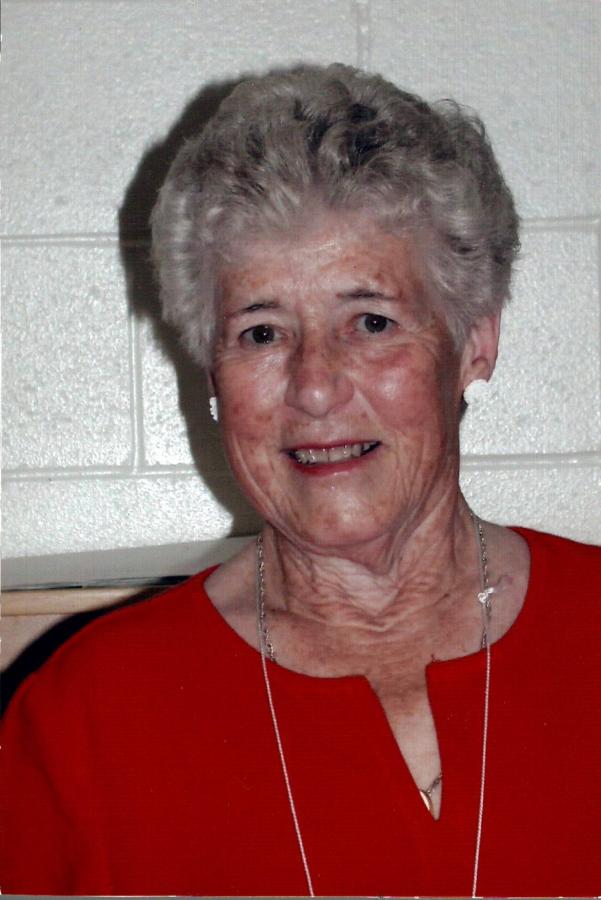 Jeanette Isabel Mair was born in Chesley on Monday, November 20, 1933, to parents Gilbert and Lily Mair. She was the oldest of two daughters, welcoming younger sister Elizabeth in 1940. The Mair family resided in Chesley where Jeanette attended both public and high school. When not in class Jeanette kept busy working to earn money for her post-secondary education. She spent time at the hospital, Silknet factory, bakery, and Hetherington’s chick hatchery, before graduating from high school.

In September of 1951, Jeanette enrolled in the nursing program at Victoria Hospital in London. Seven months later, on a Sunday in March of 1952, Jeanette was attending a Young People’s group at a local Presbyterian Church in London. This event was also attended by William Percival West and as fate would have it the two met that evening. They were quick to connect, and the following evening (Monday) attended a St. Patrick’s Day dance together. Then on Wednesday, they took in a show. As you can tell they were falling head over heels for one another, and their courtship began. Percy jokes today that they would have been married sooner but neither of them had the money to get married as they were spending it on their education. In 1954, Jeanette graduated as a Registered Nurse and returned to Chesley to help her family. Lily, Jeanette’s mother, suffered from Tuberculosis, and therefore she was a great help coming home. Jeanette began working immediately, six days a week at the Chesley Hospital.

Percy quickly followed her, and the young couple was wed on Saturday, August 6, 1955, at Geneva Presbyterian Church in Chesley. The newlyweds soon called an apartment above Cope’s Hardware home before moving to a rental home on 7th St. S.E. The West’s welcomed their daughter Cathy in 1956 and the family was made complete with Ann’s arrival in 1958. In addition to caring for her young family, Jeanette continued to nurse part-time. However, in the mid 60’s she made the hard decision to end her career as a nurse as she was only working periodically and found it challenging to keep up with rapid changes within the job and hospital. It should be noted that Jeanette’s first choice as an occupation was always to be a home economist, so she settled in nicely to her role at home. She managed the household and supported Percy and the girls in their every need.

In 1962, Jeanette and Percy bought a lot on Victoria Street (8th Street S.E.) and built their new home, whereby Jeanette quickly made it her own. In her free time, she could be found volunteering with the Chesley Hospital Auxiliary or helping with local 4-H clubs, where she led several cooking clubs. Transporting the girls to a variety of extra-curricular events was also a regular occurrence, as there was hockey, horseback riding, just to name a few. Mornings were not her favourite time of day, and she had a fridge magnet prominently displayed which said “I don’t do mornings!”.  She was very reluctant to drive the girls to school on mornings during inclement weather. When she relented, she would throw a large coat over her pyjamas for the drive. When not supporting the girls, Jeanette could often be found helping Percy organize, chaperone, and run a variety of sporting events. She was particularly helpful during track & field season as there were always a variety of roles to find. She was also a great support to Percy in his work with the Chesley Rotary Club, even hosting several Rotary exchange students in their home. Although not an active Rotarian, you would never know it, as she would help whenever she could, often behind the scenes. All her hard work through the years culminated in Jeanette receiving a Paul Harris Fellowship Award. In 2015, Jeanette and Percy were honoured by Rotary International at a “Special Celebration of Service Above Self”, for their contributions to the fight to end polio through vaccination.

Jeanette was very crafty and dabbled in quilting, weaving, knitting, and ceramics. Quilting “bees” took place in the West family recreation room where a quilting frame would be set up and like-minded ladies would work together to create hand made quilts out of scrap fabrics. She also thoroughly enjoyed cooking and baking, and happily shared her creations. Her butter tarts always fetched top dollar at any bake sale. Her tea biscuits were also a specialty and one of her own favourites. She enjoyed nature and the out of doors including watching her roses bloom and hiking and cross-country skiing in her younger years. She never turned down an opportunity to visit friends’ cottages at “the beach” for a chance to immerse herself in the water. Swimming was an activity Jeanette became fond of later in life, learning to swim at the Owen Sound “Y” as an adult, in her 40s. In fact, she and a group of Chesley friends swam regularly in Hanover and came to call themselves, “The Whalers”. Lawn bowling was a sport that Percy and Jeanette enjoyed together for close to 50 years. Jeanette was a keen competitor on the greens and participated in the Provincial Seniors Games on several occasions. Together she and Percy began square dancing in the late 60’s and continued the tradition for the next 40 years… Bridge and other card games were often played around the West family table and Jeanette was enjoying bridge at Kelso Villa up until COVID put an end to socializing between residents.

Jeanette returned to work after her father passed away suddenly in 1981. Her father, Gib Mair, operated a GIC business and Jeanette soon took over, continuing to operate it for the next twenty years. In addition to this, Jeanette also worked as a part-time reception in the McIntee real estate office. Likewise, even though she was no longer nursing, Jeanette never missed her graduating class’ nursing reunion yearly. She always looked forward to catching up and reconnecting with her classmates.

The Wests loved to travel. The entire family often headed out on an adventure every summer with their tent trailer. They saw our beautiful country from coast to coast and even traveled south to Florida for a few summers. Once Percy retired in 1987, he and Jeanette traveled more. They visited China, Australia, New Zealand, Portugal (a few times), Costa Rica, Cuba (a few times), Alaska, Europe, and several Caribbean cruises. Jeanette also loved music, particularly anything semi-classical, musicals, and symphony orchestras. She also had a soft spot for furry, four-legged friends. Peggy and Mitzi were much loved family dogs for many years, and later she enjoyed dog-sitting her grand puppies, Abby, Winnie & Bosco.

Jeanette was a devoted and kind woman who often put the needs of others before her own. She could also be described as fiesty and enjoyed keeping those around her on their toes! Jeanette always had a smile and a kind word for those she met and loved to catch up on “the community news” as she negotiated her daily routine. This might include, grocery shopping, banking, having coffee with “the girls” or her weekly hair appointments. Her family and friends were extremely important to her.  She loved hosting and attending family gatherings and also staying in touch with friends and family who she was not able to see as often, through an annual Christmas letter. Sadly, her memory began to fail her in recent years, and the roles within the West household reversed. Percy faithfully helped care for her and allowed her to keep her independence. They sold their home in 2014 and downsized, later moving to Kelso Villa in Owen Sound for more support in March of 2018. Jeanette lived out her remaining years supported by Percy, her family, and the caring staff at Kelso Villa. In recent months her health further declined, and Jeanette passed away on Monday, October 11, 2021 in her 88th year.

Beloved wife of Percy. Loving mother of Cathy West and her husband Rob Rawlins of Comox, B.C. and Ann West and her husband Bill Moriarty of R.R. #5 Owen Sound. Jeanette will be dearly missed by her sister Elizabeth Brining of South Lyon, Michigan as well as her extended family and friends. She was predeceased by brothers-in-law Douglas Brining, David West, and her parents, Gilbert and Lily (McGregor) Mair.

A public visitation will be held at Rhody Family Funeral Home, Chesley on Saturday, November 6, 2021 from 11 a.m. – 12 noon. All are welcome! Cremation has taken place and a private family inurnment will occur in Chesley Cemetery at a later date.

In lieu of flowers, memorial donations to the Chesley Hospital Foundation, Alzheimer Society, St. John’s United Church or the charity of your choice would be appreciated as expressions of sympathy.