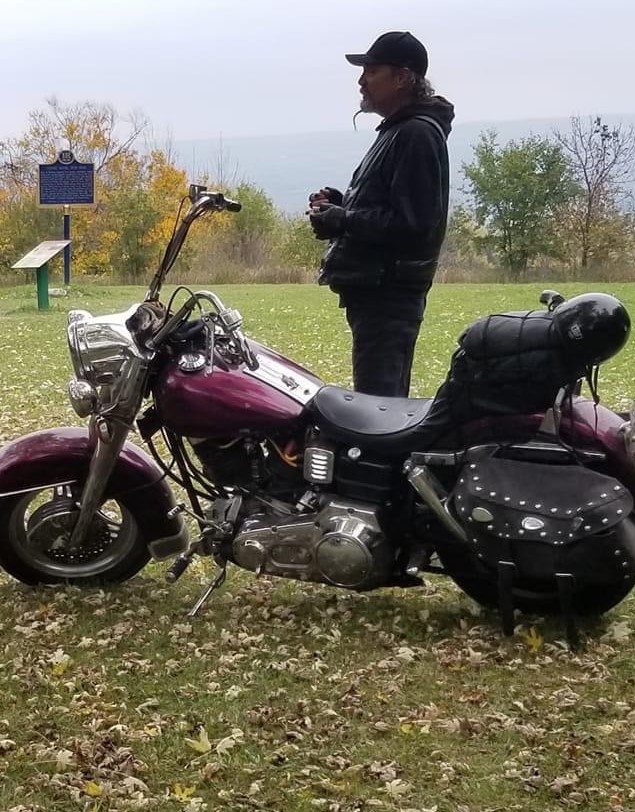 “When writing the story of your life, never let anyone else hold the pen.”

Jesse was a loving, honourable and giving man who was also known to be a little strong-willed at times. He always had a rebuttal and wasn’t afraid to argue his stance. Like most of us, apparently, he was hardly wrong! He loved life, and always wanted to live it up and have no regrets. This mind frame formed the basis for his everyday life and he will be dearly missed.

Jesse Laverne was born in Kitchener on Saturday, May 2, 1970 to parents Laverne Kuepfer and Charmaine Wilson. Their family soon settled in Burlington where Jesse welcomed younger brothers Cory (1972) and Trevor (1974). In time the family moved to Stoney Creek where Jesse attended public school at Eastdale Elementary School and Memorial Public School before enrolling at Orchard Park Secondary School. It was during these years, that Jesse welcomed more siblings with the arrival of Lyndsey (1981) and Matt (1984). In mid high school, Jesse relocated to Fergus where he joined family to complete his secondary education at Centre Wellington District High School.

He went on to try his hand at college but it was not meant to be and Jesse soon found work with Grey Bruce Construction. He settled in the Hanover area and went on to get his AZ licence. Jesse drove truck for the remainder of his career, and spent a great deal of time with Riverdale and later Exceldor Foods.

On April 2, 1993, Jesse’s world forever changed with the arrival of his son, Justin. He loved being a father and cherished all time spent with Justin. Their bond only continued to grow through the years and they were always there to support one another in the good times and the bad.

In his free time, Jesse loved to be outdoors. He could have been camping, canoeing, snowboarding or even just taking the dog for a walk. If he was outdoors he was at peace. Jesse was also passionate about anything motorcycles, particularly Harley-Davidson. His ’72 Shovelhead was his pride and joy and he spent countless hours working on his bike through the years. Thankfully, last fall (October 2020) Jesse, Justin, and his brothers Matt and Cory went on one final ride together. They enjoyed beautiful Beaver Valley and lost themselves in the day and the ride!

Jesse was also known to enjoy a good party… who doesn’t? If he had control of the music it would be Rock, Rap or any heavy metal. When it came to television he was always drawn to cartoons or animation, with South Park being a favourite. He also enjoyed following his beloved Buffalo Bills or watching any programming that revolved around horror and suspense. It should be no surprise then that Stephen King was his favourite author. Other favourites included the colour purple, anything snakeskin and his Faygo beverages. He was also deeply drawn to animals and had a variety of cats and dogs throughout his life. His pets were truly an extension of his family, and maybe even got treated better than family (lol) at times. They too, mourn Jesse’s passing at far too young of an age.

In recent years, Jesse was diagnosed with cancer. However, that never stopped him from living life his way. It may have slowed him down a bit at times, but nothing could stop Jesse from living out his remaining days on his own terms. He was always 100% full in when completing a task and valued all those around him. In recent weeks, Jesse was surrounded and supported by his family and friends. He wanted to die at home, in his own surroundings, supported by those who loved him the most, and they granted him that wish. He passed away peacefully surrounded by his loving family on Sunday, April 18, 2021 in his 51st year.

Loving father of Justin Kuepfer of Chesley. Beloved son of Charmaine Filkin of Bluevale and Laverne Kuepfer of Hanover. Jesse will be dearly missed by his siblings, Cory, Trevor, Lyndsey (Kevin) Charles and Matthew (Katie) as well as his entire extended family and many friends.

Private family services will be held. If desired, memorial donations to the Canadian Cancer Society would be appreciated as expressions of sympathy.

I was an old friend of Jesse’s back in high school and a little after that. We were actually quite good friends for a few solid years. After he moved away from Stoney Creek around the late 80’s we lost touch. But about 6 years ago a found him on facebook and we exchanged some comments back and forth over these last few years. My last memory of being with Jesse was when we went to a Thompson Twins concert in Hamilton on new years eve day 1985-86. I stayed overnight at his Dad’s house (somewhere near Fergus I believe.. was a while ago).. We went out on the snowmobiles his dad had and got into some drinking later.. This was actually the first time I tried alcohol ! Was that night… Great memories… May Jesse rest in peace.. and my deepest condolences to all of his family and friends ! Ron.

God didn’t promise days without pain, laughter without sorrow, sun without rain, but He did promise strength for the day, comfort for the tears, and light for the way.

Such a hard thing for parents and family to go through. Sending a hug to you all. Will miss Jessie.

To the Kuepfer family, we extend our sincere sympathy.

Our sincere condolences to you and your family. Jessie will be missed

Sending my sympathy to the family!

Just saying goodbye to another road brother gone too soon. See you on the flip side.

Jesse will be remembered for his smile, gentle nature and love of family and friends. Sending strength to your son, parents and siblings, relatives and friends.

It is with great sadness that I hear this. Jesse had messaged me not long ago to come down to spend a half day reminiscing about motorcycles and hauling turkeys. He was a great friend father, honest and hard worker and will be sadly missed but always remembered The world is a dimmer place without him. Ride in the wind, Jesse. Until we meet again.

Our deepest condolences to the family and friends of Jesse. He was an amazing father, man and friend and will be missed by all.

I am so sorry for the tremendous loss that is felt – Lyndsey, you recounted many great fond memories , most recently about this past summer. I hope you all find solace in the amazing memories had. ❤️

Wishing you all strength and peace during this difficult time. God Bless.

Jesse fought a long and hard battle. He always tried to stay upbeat and positive. We had a great visit with him and wish condolences to you and all members of the family. Hugs to all

Our deepest condolences to Laverne and family.
Jesse will be missed dearly but never forgotten.

Loved you as a son and will miss knowing you are on this earth but will know you will be watching from above and speeding along on some scenic highway.

Our deepest condolences . Jesse had a heart of gold, he filled it with Justin , family , his animals and friends…he never met a stranger. His laughter is imprinted on all who knew him. He will be truly missed … Much love and prayers

Our deepest sympathies Charmaine and family. Jesse fought a long and hard battle. Hugs to all.

Sorry to the family for such a huge loss, Ride free in peace!!!!

Justin, so sorry for the loss of your Dad. I hope you can take some comfort in your memories

So sorry for your loss our thoughts are with you. He was a great guy. He will be missed!

So sorry for your loss, jesse will be sadly missed.

Deepest sympathy to the family.

My deepest condolences to family and friends. He will be missed by many❤️

Karen and Dwayne Fischer and family.

Justin and Laverne………please accept our sincere condolences and prayers.Jesse was an awesome friend!He will be dearly missed by those who had the pleasure of his friendship.

It’s time like this that.
Not much in live make
Sents anymore and we ask why. Butterfly’s fly around just like your dad will. So he can keep his eyes on the world down here. Keep or eye in that sky. God picked a special Angle. It’s your dad that golden butterfly.
💞🙏💞 be with you all