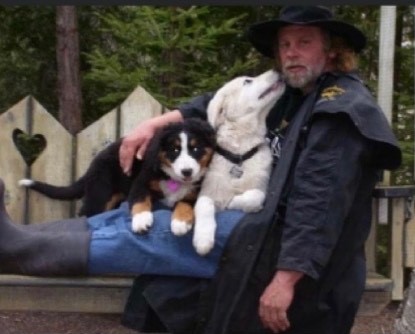 As a young child Ken was always busy and often mischievous. He also loved to play in the sandbox and build with Lego for hours! He knew math before he entered public school! This aptitude with numbers played itself out in Ken’s adult life in his love of doing Sudoku. However, it was hard to find a book of these puzzles as most of them were too easy for Ken!

Ken started school while the family was living in Aurora and continued his schooling in Powassan when the family moved there in 1973. In 1976, the family relocated to Chesley and it was here that Ken finished his elementary learning at Chesley Public School before going on to attend Walkerton District Secondary School. It should be no surprise that Ken’s nickname was “Gabby” as he loved socializing. He was always making friends, and making them fast! When the Martin family first moved to Chesley, all it took for Ken to make friends was to ride his bike over the side of the river, into the water. And all the kids cheered!

There was no doubt that Ken was the class clown, and he retained this great sense of humour throughout his life, always able to make those around him laugh. As a good friend wrote, Ken was “Someone who could always make me laugh when no laughter was around. Who could tell you a story and always make you smile no matter the circumstances.”

In his younger years Ken was a natural athlete and was in great physical shape playing hockey in Chesley. He was easy to coach as he was motivated and determined. In turn Ken gave back to the community by coaching both hockey and soccer.

By the time Ken was 16 he was the proud father of Kim. She joined Hazel and Ken in June of 1981. The following year Ken and Hazel were married, and their family was made complete with the arrival of Kris in August of 1983. Although there were a few moves, the family remained in the Chesley and Hanover area throughout the children’s youth.

Ken’s dad, Murhle, got him into the Insulators Union Local 95 and throughout most of his life, Ken worked as a member of the Union, travelling much of Ontario and North America for work. He was a highly skilled tradesman that enjoyed teaching his craft to anyone that willing to learn. One colleague wrote, “He was a great guy to be on a job with. He always took care of any problems that arose with health and safety or union issues if there was anything amiss for the Brothers and Sisters and especially for the underdog of the crew.” He was proud of his generational Union affiliation, where he was joined by his father, brother, son and grandson.

Ken and his dad also had a home renovation business, built decks, and installed windows and doors. Ken also loved to work on cars in his friends’ garages.

Sadly, in 1997, Ken and Hazel went their separate ways. The dissolution of his marriage broke Ken. He had a soul searching adventure, which took him across North America for a year. He would return, but would go on several of these journeys, usually after times of trial and tribulation. One of which, ending up in New Jersey, where Ken changed his name to ‘August’ Martin along the way. When asked why he choose the name ‘August’ (which was the month Kris was born), Ken replied, “I couldn’t very well call myself “June.” (Which is the month Kim was born in!)

Ken was left-handed, which helped make him an incredibly creative person. He worked with grape vines and cedar, creating rustic furniture well before it became in fashion. He built many birdhouses and other outdoor projects, and just loved to turn everything he touched into beautiful art.

One phrase that would accurately describe Ken is “Ahead of his time,”. He always had the latest stereo equipment, matched by the 1000s of CDs he had (all in alphabetical order). Ken was forever discovering more obscure musical groups, again putting him well ahead of the general population. So, it truly can be said that Ken loved his music! One beautiful memory is of Ken playing his bass guitar to the songs he listened to (which, of course, were played at full volume).

Even in his prank playing Ken was ahead of his time. Ask the kids about the time Ken lit an entire row of cherry firecrackers on their porch. It is such a funny story! Indeed, Ken liked to be a trend setter, but liked to be different!

Ken also had his demons, wrestling with mental health and alcohol addiction. The good news is that Ken was able to maintain his sobriety for the last 10+ years. That is quite the accomplishment!

The last couple of years have been physically difficult for Ken as his diabetes raged throughout his body. It has been only in the last couple of weeks that Ken and his family gained knowledge of his cancer diagnosis. Ken passed away at Hanover & District Hospital on Saturday, November 20, 2021, at the young age of 56.

Loving father of Kim Martin (Jeff Patterson) of Hanover and Kris Martin (Sheila) of Port Elgin. Grandfather of Kalvin, Abijah, Jared, Finch, Leo, Kadience, Eden, Andrea (Devin), and Christian. Ken will be dearly missed by his siblings, Henry and his wife Brenda of Restoule, Cheryl Martin, Cathy Martin and her husband John Stinson, Tracy and her husband Troy Nicoll, all of Chesley. He was predeceased by his parents, Murhle and Betty (Hexham) Martin.

A graveside service honouring Ken’s life will be held at the Chesley Cemetery on Saturday, December 4, 2021 at 11 a.m. All are welcome!

In lieu of flowers, memorial donations to De Novo Treatment Centre would be appreciated as expressions of sympathy.