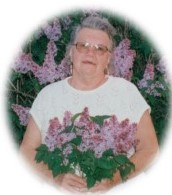 Madeline “Madge” Elizabeth was born at home, on the family farm in Brant Township, on February 20, 1924, to parents Herman and Helena “Lena” (Adolff) Lorenz. She was one of six children, along with siblings Ellie, Edna, Rene, Mel, and Eldon. In her teenage years, Madeline was introduced to a young man by the name of Edgar William Weppler. The young couple were married on June 20, 1942 at St. Mark’s Lutheran Church and soon settled in Chesley. In time, the Wepplers returned to life on the farm, purchasing their own. Throughout their lives they owned a variety of farms in both Brant and Elderslie Township. They got their start by milking cows before moving into beef cattle in later years.

In the mid-1940’s the Weppler family began to grow with the arrival of Carol (1946). She was soon followed by her four younger siblings Vernon (1951), Sharon (1953), David (1955), and Wesley (1963). Madge kept very busy with her young family and I am told on more than one occasion her middle three, Vernon, Sharon, and David kept her on her toes. There was the odd joke or prank involved and usually, Madeline was at the wrong end.

Many family memories were created on their family trips to Arizona to visit Uncle Bud (Weppler), Aunt Ella and family. The seven of them would load up in the van, along with all their belongings, and head out on the long trek for Arizona. Madeline and Edgar made this trip several times and the kids joined them for a few when they were all still at home. Other adventures took Madge to places like Alaska, California, Florida, and Nashville to name a few.

In her free time, Madge enjoyed spending time outside gardening, both in her flowerbeds and large garden. She was an accomplished quilter and enjoyed embroidery as well. Madge was always up for a game of cards and loved catching up with everyone in the family at the yearly Lorenz reunions.

Madge’s faith played an important role in her life. Once married, she attended the Chesley Baptist Church and was an active member throughout her life. Her Bible was always close and she enjoyed reading it regularly. Madge also enjoyed music, loving to take in a variety of hymns and gospel music whenever possible. In her later years, when she could no longer physically attend, Madge resorted to television broadcasts on Sunday mornings to remain engaged. Her faith played a particularly important role in her life through the tough times, when she lost her husband and then later her daughter, Sharon. It always instilled comfort in her life.

Sadly, Edgar died in 1989. Madge soon sold her home in Keady to be closer to family. She enjoyed spending time with her grandchildren and keeping up with their busy lives. Although keeping more to herself, Madge’s family was her world and she would do anything to support them. She was the constant rock within the family and led by example. Her hard work never went unnoticed and many of her characteristics and traits were passed down to her children and grandchildren.

In 2010, Madge moved to Owen Sound calling St. Francis Place home. A heart attack in 2015, limited her further and she required more care and soon became a part of the Summit Place family. Here “Maddie” received excellent care and lived out the remainder of her days, always being supported by her family. Madeline passed away peacefully on Tuesday, November 24, 2020, in her 97th year.

A private family graveside service honouring Madge’s life will be held at the Chesley Cemetery.

In lieu of flowers, memorial donations to the Chesley Baptist Church, Canadian Cancer Society or Parkinson Society Southwestern Ontario would be appreciated as expressions of sympathy.

So sorry to hear about Madeline’s passing. May your memories and photos get you through this difficult time.

Dear David and Joyce,
We extend our deepest sympathy on the loss of your mother. We read her life story with great interest.
Norm and Mary Mainland

To Vern, Gloria and the entire family,
Sincere sympathy in your loss. Keeping you in our thoughts.

Our sincere sympathy. Vern, Dave & others your Mom lived to a great age.

Our sincere sympathies to all of your family. You are in our thoughts at this difficult time.

David,Joyce and family, we are so very sorry to hear about the passing of your Mom and want you to know we are thinking of you. Hold on tight to all your memories. Love Kevin and Mary Anne oxox

Sorry for your loss. The loss of a mom or dad is truly sad. Joyce remembers when she was younger your parents visiting at the farm,good memories. Always remember the good ones.

So sorry to hear of the loss of your Mother, you are in our thoughts and prayers

Our deepest sympathy to the Weppler family. Thinking of you.

So sorry to hear of your loss. Our thoughts are with you.

To the Weppler families, sorry to hear of your loss, our condolences to all.

Deepest condolences on the passing of your grandmother, Jason. We are thinking of you and your family at this time.

Sincerest condolences for your recent loss to the Weppler family.

So very sorry to hear of your Mom’s passing. Cherish all the wonderful memories and hold them close to your heart !

Our Sympathy to the Weppler family. We are so sorry for your loss.

To the Weppler family. Condolences on the Loss of your Mother.

Eleanor Petrie and Joycelyn and Bob and families

Our sincere sympathy to the Weppler family, sorry to hear of your loss.

Our deepest sympathy to you all, may she Rest In Peace.

To the Weppler family: sorry to hear of your loss. Our condolences to all.

We extend our sympathy to the Weppler family. Our thoughts and prayers to you at this difficult time.

Dave and Joyce, our sympathy is extended to you at this time. Though we are unable to reach out personally know that you are in our thoughts and prayers.

Dear Joyce & David, My deepest sympathy goes out to you both and your family on the loss of your mom. Surround yourself with the love and support that is all around you for it will help get you through this difficult time. Hugs.

Dear Joyce and David, I am so very sorry to hear of your loss. Thinking of both of you.

Dear David and Joyce, I am very sorry for you loss, my prayers are with you and all your family.

David, Joyce and the Weppler family, we are so sorry to hear of the passing of your Mom, our thoughts are with you at this time.