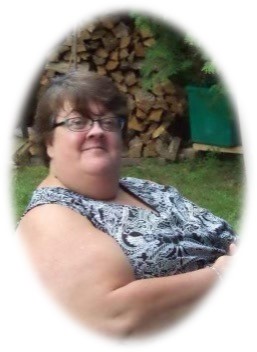 Margaret “Margie” Ann was born on Monday, April 6, 1964, in Woodstock, Ontario. She was the eldest daughter of Ronald and Cathy (Argent) Armstrong and was later joined by three sisters, Sue, Cheryl, and Patricia. The Armstrongs resided in Woodstock where the girls attended both elementary and secondary school.

Margie soon found work in the textile industry, remaining in Woodstock. On October 20, 1989, Margie’s world forever changed when she welcomed her son William. A couple of years later, in 1991, Margie was introduced to a young man by the name of Kevin Louis Vanslyke. Their matchmakers were Margie’s aunt and uncle, Sue and Larry Wasylyk, and they were introduced at a Moose Lodge (#1141 Woodstock) event. Although Kevin lived out of town in Chesley, he was very active within the Lodge and returned to Woodstock almost every weekend to participate in a meeting or event. Over the next coming months, their relationship bloomed and together they welcomed Kevin Jr. on October 25, 1994, in Woodstock. The following year, Margie and the boys moved north to join Kevin, whereby the Vanslykes called 2nd St. S.W. home. Margie and Kevin were officially married on Saturday, August 21, 1999, by Rev. Seed, at the Moose Family Centre in Woodstock.

Life was busy for Margie as she cared for her young family, all the while settling into her new surroundings. In 1999, the Vanslykes made their final move and settled into their new surrounding on 5th St. S.E Once both boys were enrolled in school, Margie returned to the workforce, working part-time at Parkview Manor in housekeeping. She thoroughly enjoyed interacting with the patients and staff alike and quickly became one of the family there. Unfortunately, Margie soon began to experience health issues and she was forced to walk away from a role she enjoyed.

Margie liked to laugh and have fun! She had a big heart and always enjoyed helping people, whenever she could. She was also a homebody, often preferring to stay home, rather than venturing out. Sadly, the introduction of the internet only made this worse, as Margie would interact with friends and family through the many options available to her online. The gaming site, Pogo, was her go-to, where she played cards daily. She also enjoyed 3-D painting. When it came to television, Margie liked a good horror movie and was an avid follower of Big Brother and Survivor. When it came to music, Def Leppard, Supertramp, and a variety of county artists were regulars for Margie. Her K-9, Max, was another companion, as they often kept each other company. Together with Kevin, the couple enjoyed camping and stationed their trailer on a family property in Woodstock. This allowed them to spend more time visiting family and friends.

In recent years, Margie’s health had declined further. Sadly, like most of us, the pandemic did not help matters either, as it enabled her to remain home and isolate further. The support of family and friends was ever present, but sadly, Margie passed away suddenly, at home, on Saturday, August 27, 2022, in her 59th year.

Beloved wife of Kevin. Loving mother of William (Hayley) of Woodstock and Kevin Jr., at home. Cherished grandmother of Chanel and Jaxon. Margie will be dearly missed by her mother, Cathy Armstrong of Woodstock, and sisters, Cheryl (Hugh) Sawdon, Sue (Tim) Neave, and Patricia Armstrong, all of Woodstock. She was predeceased by her father Ron Armstrong.