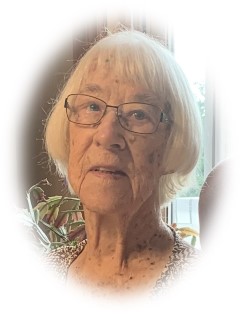 Marj was born at the family’s home. It was the girls’ responsibility to care for their siblings, do housework, as well as work in the fields. In fact, the Nickel children were kept so busy Marj often quipped, “There was no time to be bad.” Luckily, there was time for Marj to go to school and that she did, right up until she graduated from high school. It was in Lake Huron where Marj learned how to swim, often proclaiming that it was “cold as hell.” (LOL) Marjorie certainly could speak her mind!

Gordon Wark and Marjorie married on July 27, 1946, at Southampton Anglican Church. The two settled into an apartment in Hanover where they welcomed their son Doug in 1950. After Gordon worked seven years for The Metzger Mill the three Warks moved to Southampton in 1952, living next door to Marjorie’s parents. Gord, Marj, and Doug welcomed Gwen in 1954 and as she turned ten Gordon was laid off and the four Warks moved to Chesley. It was there that both Gordon and Marjorie worked at Heirloom Furniture until retirement in 1988. Marj also babysat a great number of neighbourhood children and is fondly remembered as “Grandma Marjie.”

In their spare time, Gordon and Marjorie loved to travel, camp, and snowmobile. The last week of July and the first week of August were always reserved for holidays. Alvero, spouse to Ivan, would plan their trips and off they would go.  Nashville, Tennessee and Wheeling, West Virginia were just a few of the places they enjoyed. Yet again laughter rings out as the family remembers the four camping out in Walmart parking lots! The trip of a lifetime was to Hawaii in the late 70s.

Locally, Marj and Gord loved going to the Fergus Highland Games, the Blyth Steam Show, and the Hanover Raceway. One of their favourite camping spots was Lilac Lodge up by Bobcaygeon and as a family went from a tent to a camper in the back of their truck to a tent trailer. The winter was reserved for snowmobiling and the two were some of the founding members of the Chesley Snowmobile Club. They both were members of the Legion in Chesley and Marj especially enjoyed her work with the Legion Auxiliary. Reading and working on Word Find puzzles were enjoyable pastimes for Marj. In fact, it is said that once she got her nose into a book, it rarely came out!

In April of 2019, Marj and Gordon moved to Durham. Just four days after their move, Gordon suffered a severe stroke and passed on May 21, 2019.  Marjorie remained in their very same apartment until just a few weeks ago when she entered Durham Hospital, passing on Wednesday, August 3, 2022, in her 95th year.

A private, graveside service honouring Marjorie’s life will be held at the Chesley Cemetery.

In lieu of flowers, memorial donations to the Canadian Cancer Society or Heart & Stroke Foundation would be appreciated as expressions of sympathy.