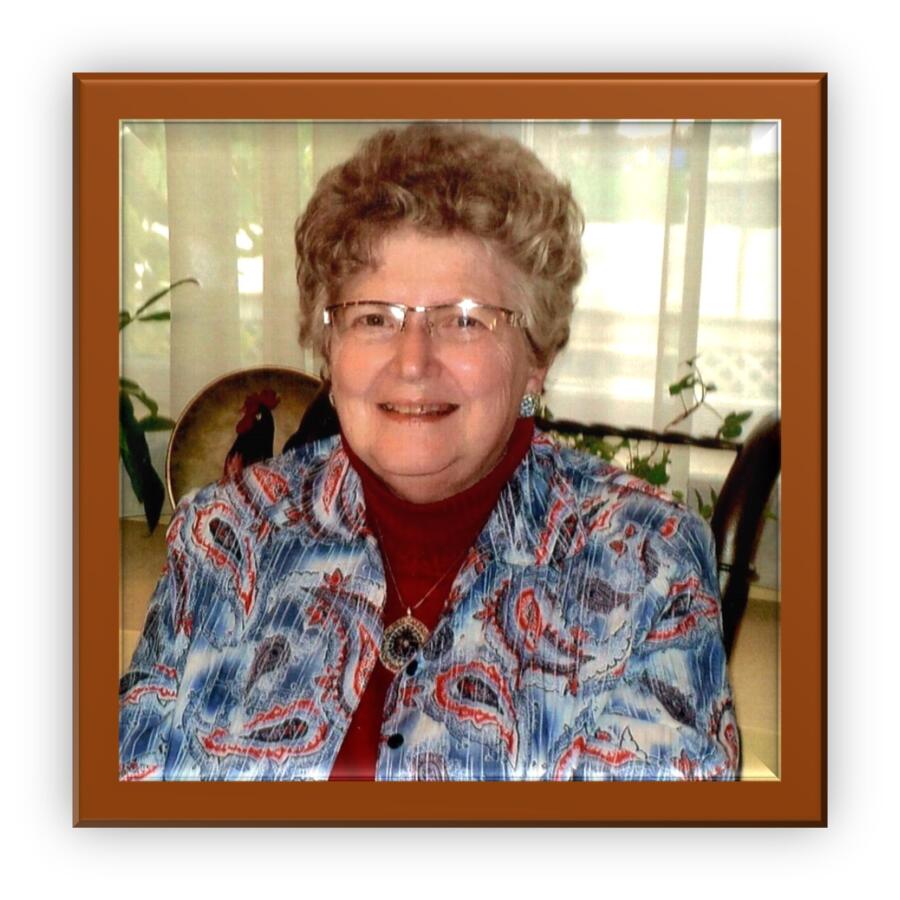 Marlyn Lois was born in Eganville, Ontario on Thursday, September 16, 1937, to parents Verner and Viola (Wolff) Bimm. She joined older brother Alvin (1932) and the Bimm family was later made complete with the arrival of Mervyn (1942). The Bimm family lived and attended school in Eganville, with Marlyn completing her Grade 13 in London while boarding with an aunt. Unfortunately, Marlyn was unable to pursue her dream of becoming a teacher and soon returned to her family home in Pembroke.

She soon began working at the movie theatre in Eganville and later moved on to work in the office at Atomic Energy in Chalk River. It was during this time that Marlyn was introduced to a charming young member of the armed forces by the name of Godfrey “Buddy” Thomas MacAulay. Buddy was stationed in Petawawa at the time, and it was love at first sight. The young couple were wed on Friday, October 31, 1958, in Pembroke and soon settled on the base in Petawawa.

The MacAulay family began to grow with the arrival of Barry (1959) and was later followed by twin brothers, Terry and Trent (1962), Trevor (1967), and Derek (1972). To say Marlyn had her hands full would be an understatement… her responsibilities within the family home were endless. In addition to caring for her young family, there were constant meal preparations and household chores, leaving little time for herself. In true motherly fashion, Marlyn always put the needs of her boys and husband first. In 1968, the MacAulay’s relocated to Sudbury where they remained until 1975 whereby work opportunities brought them to Bruce County and they settled on the 10th of Elderslie.

The boys finished high school in Chesley and Walkerton, and they soon began leaving the nest… but they kept coming back especially for Marlyn’s home cooking. Some of the boy’s favourites included Marlyn’s bacon sandwiches, spanish rice, goulash, and her chili recipe. Likewise, no Sunday was complete without a roast for dinner and all the fixings. She definitely was talented in the kitchen. In her limited free time, Marlyn enjoyed gardening and keeping her garden ornaments in pristine condition. She also had a passion for reading. She enjoyed autobiographies, a variety of magazines, and any of Debbie Macomber’s novels. When not reading, Marlyn could often be found enjoying her favourite television programming. She never missed an episode of the Young & the Restless, was an avid Royal watcher, and thoroughly enjoyed watching any award show and figure skating on TV. Following the Olympics was another favourite pastime and yet sadly, she never witnessed the current games. When it came to treating herself, Marlyn’s go-to was tea with milk and a cookie. She also had a soft spot for dark chocolate or any type of sweets! 🙂

Marlyn was a kind, loving, and generous woman, who was the true matriarch of her family. She always held everything together. She reinforced in her sons the qualities of honesty, respect and taught them the importance of manners and humbleness. Likewise, she instilled in them that money was not everything and that one can lead a productive, successful life without it. Marlyn was truly a special lady!

In retirement, Buddy and Marlyn enjoyed more quality time together and could often be found at the horse races in Hanover on Saturday nights. In the summer months, countless hours were spent relaxing in lawn chairs in the yard, while soaking in the sun and listening to the likes of Natalie MacMaster on the fiddle or any east coast favourites. Sadly, their time together was cut short when Buddy passed away in 2014. Although a huge setback, with the support of family and friends, Marlyn soon made the move to Owen Sound to be closer to family and settled in nicely. Here she delighted in the opportunity to see family almost daily and came to enjoy the luxury life of living in town offered. Sadly, Marlyn passed away after a brief illness at Grey Bruce Health Services, Owen Sound on Monday, February 7, 2022, in her 85th year.

Cherished mother of Barry (Terri), Trevor (Penny), Derek (Ann), all of Owen Sound, Terry, and Trent, both of London. Marlyn will be dearly missed by her seven grandchildren, ten great-grandchildren as well as her brother Mervyn Bimm of Pembroke. She was predeceased by her husband Buddy MacAulay (2014), brother Alvin Bimm, and her parents, Verner and Viola (Wolff) Bimm.

Private family services will be held. If desired, memorial donations to the Heart & Stroke Foundation and Diabetes Canada would be appreciated as expressions of sympathy.