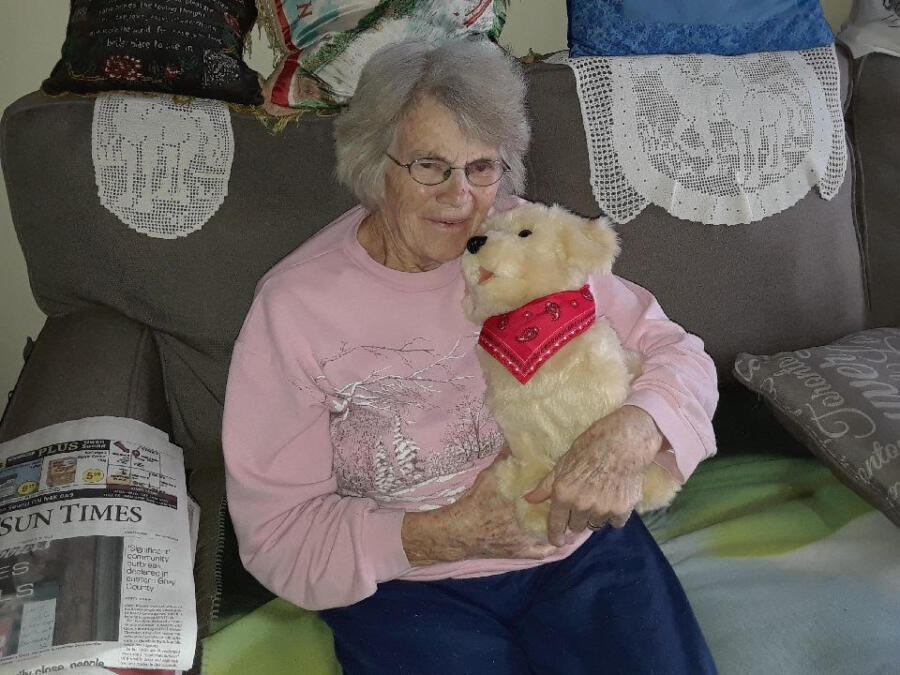 Mary Elizabeth Robertson was born on May 25, 1934 in Syndham Township to parents Leslie and Elizabeth (McKay) Robertson. Mary was welcomed by her older sister Jean, and David and Alec followed her to complete their family. Mary’s family lived on a mixed farm in Syndham Township with cattle, pigs and horses. Mary enjoyed spending time in the horse pen and apparently the horses would follow Mary around the farm. She would ride one of her favourite horses, Kate, to the Syndham SS #11 Schoolhouse that her and her siblings attended which was a mile away from her family home. Once she would get off the horse at school, it would find its way home and be back at the school to pick Mary up at the end of the day. Nothing like a bond between a young girl and her horse!

After finishing Grade 8, Mary attended Owen Sound Collegiate and Vocational Institute (O.S.C.V.I.) and graduated from Grade 12 there. While she was in high school, she worked as a waitress at Woolworths. After graduating, she worked at a print company in Owen Sound where she boarded with a family so that she could work.

In Mary’s spare time, she would attend local dances with her friends. At one specific dance at the Bognor Hall, she ran into two ladies that she had met at dances prior and with them was a handsome young gentleman by the name of Orval Kalinowski. Orval attended the dance with his two nieces who had the intent of introducing him to Mary, and they hit it off instantly. They dated for three years before getting married on October 22, 1955 at Walter’s Falls Church. Not long after they got married, they moved in with Orval’s parents, Louis and Mary Kalinowski, and there they welcomed their first son John in 1956, followed by Beth in 1958, Debbie in 1960, Linda in 1962 and finally Louis in 1974.

As a young couple with five young children, they bought Orval’s parents farm outside of Desboro. On the farm, they had a wide range of animals. They had cattle, pigs, chickens, geese, ducks, and the occasional barn cat. When Orval’s mother lived with them to help with the children, Mary would typically be outside doing the many chores that needed to be completed. She had a vegetable garden that was a necessity, and a flower garden that was just for her. Once Orval’s mother had passed, Mary had to take on the job of cooking and cleaning on top of her duties on the farm. This was a lot for her to take on while raising five children. However, I am told that she never got mad at her children, and if she did, she hid it very well and was always concerned for their wellbeing more than anything.  When she had the time, she would work in the tobacco fields in the summer with Orval, and pick apples in the fall, taking any job she could to provide for her family. Mary worked at the Chesley Motel in the mid 1960’s and delivered mail in the early 1970’s. In 1979, Mary took a job with Red Cross as a homemaker. She would go into people’s homes and help them with cooking, cleaning, bathing, and other jobs that were needed done. She did this until she retired at 68 years old.

The most important thing in Mary’s life was her family. Nothing brought her more joy than when her family was all together. Mary loved her children, and her love grew even more when her grandchildren were born. Her and Orval would pick up their grandchildren after school, without the knowledge of their parents, just so that they could spend more time with them. Mary was so proud of all her grandchildren and would do anything to see them smile. She loved all her many memories with Orval and others in their community, if that was attending the dance club in Kilsyth every Wednesday night, helping with the local fall fair, or cooking for the community dinners. Mary loved spending time in her flower garden. She always had the most perfect garden and loved every flower of every colour. She enjoyed listening to a wide range of music between country, waltz and many different hymns.

If you could use any word to describe Mary, it would be nurturing. She was always putting the needs of others before herself and was always making herself available to help. Mary was always busy, but she never complained. She was kind to everyone she met and would make everyone feel so special. Mary was continually happy and always had a contagious smile and a calming presence. In the last five years her health was declining and in the last few days of her life, she still had a smile on her face at Chapman House in Owen Sound. Sadly, she passed away on Friday, March 4, 2022, in her 88th year.

Beloved wife of Orval. Loving mother of John (Cheryl) of Trenton, Beth (Ray) Gendron of Owen Sound, Debbie (Mike Evesan) of Corrunna, Linda (Ed) Price of Edmonton, Alberta, and Louis (Amy) of R.R. #2 Desboro. Cherished grandmother of 9 and great grandmother of 11. Dear sister of David Robertson of Owen Sound and Alec Robertson of Grand Prairie, Alberta. She was predeceased by her sister Jean Steer and her parents Leslie and Elizabeth (McKay) Robertson.

Visitation will be held at Rhody Family Funeral Home, Chesley on Thursday, March 10, 2022, from 4-8 p.m. A funeral service will be held at Lutheran Church of Our Saviors in Owen Sound on Friday, March 11, 2022 at 11 a.m. All are welcome to the visitation and funeral service! The funeral service for Mary will be livestreamed through Zoom at service time and the service will be recorded and available to view on the funeral home website in the days following. Masks are mandatory. Spring interment in Desboro Cemetery.

In lieu of flowers, memorial donations to the charity of your choice would be appreciated as expressions of sympathy.