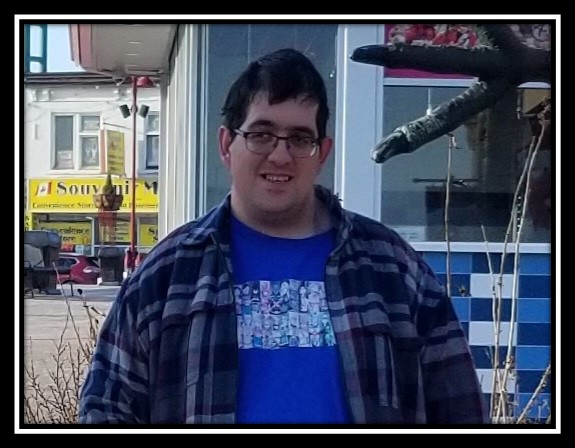 Michael John was welcomed into the world by his parents, Randy and Sheila (Frook) Jacobs, on Monday, June 8, 1992, five weeks premature. He was truly a miracle child as he was born with hydrocephalus in London, and the original diagnosis given to his parents by doctors was that Michael would never be able to eat, drink, walk or talk. What a heartbreak…, but little did they know the fight Michael had in him. Within 48 hours a shunt was inserted to help relieve the pressure on his brain and the following six weeks of his life were very much touch and go for Michael. Sheila never left his side. For the first year and a half, they spent more time in the hospital than out. He was later diagnosed with epilepsy and continued to surprise many with his progress.

During this time, the Jacobs’ relocated to Hanover to be closer to a hospital should Michael need additional care. Once home, Michael joined older brothers Shawn (1987) and Craig (1989) and the family was later made complete with the arrival of his youngest brother Jesse in 1996. Michael began attending pre-school shortly after getting home as it helped improve his speech. He was enrolled at Saugeen Valley Elementary School in Durham, which specialized in catering to and supporting special needs. Michael remained in this setting until the school closed following his grade 6th year. He went on to attend James A. Magee for a couple of years before beginning high school at J.D.S.S. Michael’s learning continued until 2013 when he left the secondary setting and became a member of the Supported Choices family. This provided Michael with a social group setting whereby he excelled. He particularly loved the outings and field trips whereby he camped and attended sporting events which included the likes of Blue Jay, Raptor, and Attack games. He truly was at peace in these surroundings.

At home, Michael enjoyed entertaining himself, often spending hours on his own filling in his day. His room and his desk were his havens. As you have probably already picked up, he was a huge sports fan and loved watching a variety of sporting events on television. Michael loved the colour green and so it only made sense that his favourite hockey team was the San Jose Sharks, with Joe Thornton receiving a lot of his attention. Let’s just say Michael had mixed feelings when Joe signed with the Maple Leafs a few years ago! 🙂 In addition to the other major sports, Michael thoroughly enjoyed NASCAR and wrestling, with The Undertaker and Stone Cold Steve Austin being two of his favourites. In recent weeks, he was really beginning to look forward to Wrestle Mania next month. Michael also liked anything to do with Marvel, Pokémon, Power Rangers, and detective comics. Michael’s iPad also provided him with entertainment, whereby he would search, learn, play games, watch videos, and enjoyed painting by numbers. Away from the screens, Michael enjoyed reading about topics he was interested in as well as listening to a variety of music.

Michael was a happy, friendly, respectful, and honest individual who wasn’t afraid to start up a conversation. Most of these chats started on his own terms, in other words, if Michael wanted to talk, he was all in, but if he didn’t, he could be rather short with you. He was a nighthawk, even as a baby, and never usually went to bed before 11. Michael always told the truth, sometimes to his family’s displeasure… especially after a night whereby his brothers might have enjoyed a little too much to drink. I am told he was not quick to forget! 🙂 A couple of memorable stories of Michael included a trip to Toronto for a Car Show whereby he experienced an escalator for the first time. Let’s just say he went up the escalator feet first…. yes, that is hard to do, and it should be no surprise that this was his last experience on an escalator! A story was also told of Michael enjoying Aunt Joanne’s fettuccini alfredo. Needless to say, part of the metal whisk fell into the dish during preparations and a piece of metal ended up in Michael’s mouth. Let’s just say he never let her forget this blunder. When it came to food, Michael definitely had his go-to meal. It was stuffed chicken (always cut in 8 pieces no matter the size) and hashbrowns. If he had it his way, it would be washed down with a nice refreshing Coke. Honestly, he could eat this meal daily. Michael also enjoyed Friday night pizza and he had a soft spot for chocolate bars… like most of us. Schedules and routines were very important to Michael and this even applied to his clothing selection. Certain days, or a particular day of the week, often led Michael to wear a specific shirt or colour.

Like most of us, the last couple of years have been difficult for Michael. His routines were disrupted, there was isolation, and we cannot forget the masks. Michael did NOT like wearing a mask. He was, however, surrounded by the love and support of his family, whereby they made the best of every day together. He was so looking forward to getting back to Supported Choices, his friends, and a regular routine. Sadly, it just wasn’t meant to be as Michael passed away very suddenly at home, surrounded by his loving family on Tuesday, February 22, 2022, at the age of 29.

Cherished son of Sheila (Frook). Loving brother of Shawn (Syra), Jesse (Emily), all of Hanover, and Craig of Toronto. Michael will be dearly missed by his niece Lia, nephew Skylar, and his grandmother Nancy Frook. Devoted nephew of Joanne (Paul) McLaren, Scott (Elaine) Frook, Rosanne Frook, and Mark (Becki) Frook. He will be fondly remembered by his many cousins as well as his extended family at Supported Choices in Hanover. Michael was predeceased by his father Randy (2019).

A casual public gathering, celebrating Michael’s life will be held at his second home, Supported Choices, Hanover (626 12th Ave.) on Saturday, March 5, 2022, from 2 – 4 p.m. Masks will be required, and all applicable COVID-19 restrictions will be followed. As a tribute to Michael, guests are encouraged to wear his favourite colour, green, a favourite shirt or sweater or anything that makes you comfortable, just as Michael would have wanted it! Inurnment in Hanover Cemetery.

In lieu of flowers, memorial donations to Supported Choices (Hanover) or Children’s Health Foundation would be appreciated as expressions of sympathy.