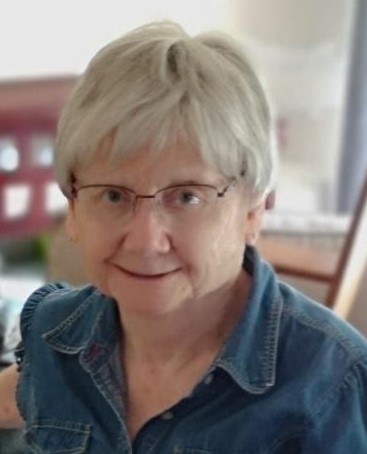 Patricia Mary Ann was born in Walkerton, March 17, 1955 to Francis Anthony and Margaret Helen (Bester) Graf. She was the third of four children; Jim (1949), Ed (1953), Pat and John F. (1958 – 1984). When Pat was born, she was whisked off to Toronto Sick Kids (she was bringing up blood as her mom had a hemorrhage during childbirth however, she overcame this to thrive). The Graf family resided across the road from the Catholic Church in Chepstow where Patricia and her brothers attended Mary Immaculate School. Pat attended WDSS and following graduation moved to Kitchener where she worked at Economical Mutual Insurance until 1978. Pat then returned to the area and began working for a neighbour, Rita Erb at Rita’s Cleaning, where she remained from 1979 – 1992.

Pat and Dave were with friends when they met at the Paisley Inn on July 1, 1977. Pat and David George Woelfle were married Friday, September 8, 1978, at the Mary Immaculate Church in Chepstow. Once they tied the knot, Pat joined Dave on the Woelfle homestead. They were the 4th generation to live on the farm (originally settled by Dave’s great-grandfather). It was on the 16th Concession of Greenock and was comprised of 200 acres, with beef cattle and sheep in later years. Pat’s tiny hands made her the perfect person to turn the lambs around when the sheep were pregnant! Together they adopted two children on April 29, 1992, when siblings Cory (1989) and Lorrie (1990) were lovingly welcomed into their home.

In 1992, Pat began her own cleaning business, Pat’s Cleaning. In the years that followed she built her client base and had the opportunity to set her own hours, while recovering from a hip replacement. When living on the farm, Dave would buy a tractor and bring it home, against Pat’s wishes. Eventually, Dave sold three of the tractors and purchased a 1989 Lincoln Town Car, which Pat enjoyed a lot more. The only problem with the car was that Pat was too short to see over the dash, so she had to move the seat up. She also ran into issues when there would be something in the trunk of the car she needed, as she would need a step ladder to get it out! While Pat was busy on the farm and with her cleaning business, she was very involved in her community. She was a member of the Women’s Institute for years and a member of the Red Hat Society. Pat and Dave were founding members of the Heritage Show in Paisley and continued to volunteer year after year.  They sold the farm in 2016 and began building their retirement home on a 3-acre parcel of land on the outskirts of Paisley.

Pat had a passion for collecting cups and saucers, many of which were passed down from both their families. She also greatly enjoyed walking the beach in Port Elgin, attending concerts (especially seeing her favourite, Daniel O’Donnell, the Blythe Theatre, the Bijou in Chesley and dancing. However, her greatest of all passions was flower gardening. She and Dave had several indoor pets (3 cats and a dog), the most significant being Buddy. Watching the Woman’s Channel on TV brought Pat great pleasure as was watching the Young and the Restless, The Big Bang Theory and romance movies. It makes sense then that Pat enjoyed reading Harlequin Romances (many of which she received from her mother-in-law), yet she also enjoyed doing word searches. Another of Pat’s favourite performers, believe it or not, was Elvis Presley. In her younger years, Pat took piano lessons and played the accordion.

Pat and Dave spent many weekends with friends, including Debbie and Scott Millar, and Debbie would introduce Pat to something new every time they were together, which Pat always looked forward to. She especially enjoyed trying Beavertails (chocolate being her favourite, not the apple ones because the apples would slide off while she was eating it), French Vanilla Cappuccinos, and mystic fire (colour packets that get thrown into a campfire).  She enjoyed going swimming in Scott and Debbie’s pool and was there on opening day to be one of the first in. Pat and Dave would go out to eat typically 2-3 times a week, with Walker’s Landing in Walkerton and Allen’s Fireside Grill in Port Elgin being their favourites. Her favourite drink was iced tea and she enjoyed her hamburgers and fries. Pat and Dave enjoyed visiting Port Elgin beach and listening to the music on Sunday nights and liked spending long weekends going to see the fireworks. Both Pat and Dave enjoyed travelling and together they visited Florida and Nashville. Pat always looked forward to her monthly ladies meet up, when a group of ladies in the Paisley area would visit each other’s home to do crafts and activities together.

One thing that cannot be overstated about Pat was she loved being a mother (and grandmother). She would mother you if you were family or a friend. Pat described herself as very patriotic, stubborn (she had to be to live with Dave, LOL), strong but mighty. Pat was loving and caring. You could tell when she was excited because she would bounce and clap her hands. She didn’t give up easily, which was evident in the latter part of 2000 when she was diagnosed with skin cancer and underwent 35 treatments in KW. In her 40’s she also had Meningitis and spent a month in the Owen Sound Hospital. This resulted in Pat losing 25% of her hearing, however, she never missed a beat.

Pat passed away peacefully at Grey Bruce Health Services, Southampton, on Tuesday, November 22, 2022, at the age of 67. Loving wife of David Woelfle. Beloved mother of Cory Woelfle (Heather) and Lorrie Woelfle (Chad). Proud grandma of Hannah, Brenna, and Evander. Pat will be missed by her siblings, Jim (Stella) Graf and Ed (Anne) Graf and her sister-in-law Elizabeth Woelfle. She will be remembered by her nieces, nephews, cousins and friends. Patricia is predeceased by her parents Margaret and Frank Graf and her brother John.

Memorial donations to the Canadian Cancer Society or to a charity of one’s choice would be appreciated by the family.