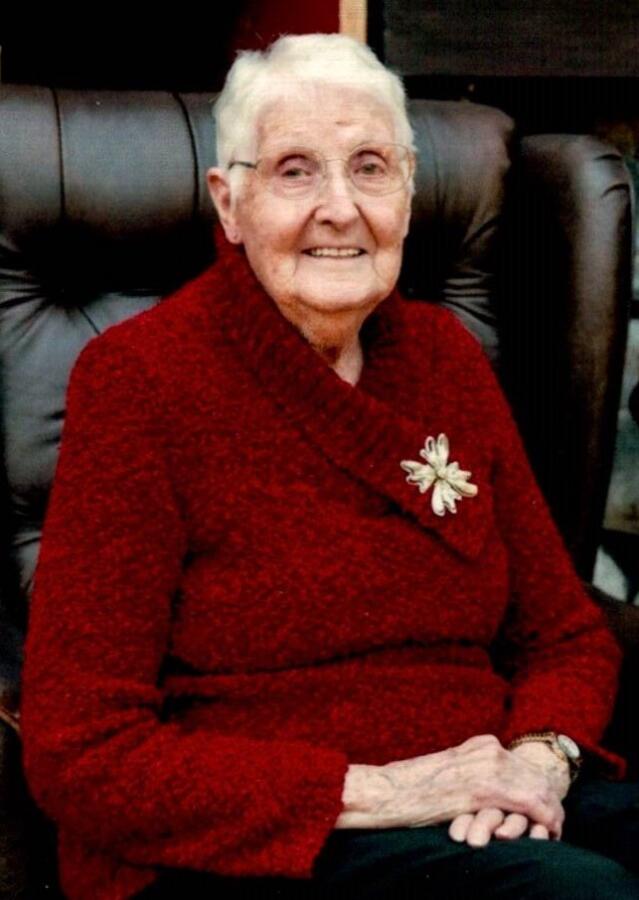 Anna Marguerite was born at home, on the north side of concession 10 in Arran Township, on Monday, August 7, 1922. She was welcomed by her parents, Albert and Nellie (Minary) Speer, and eight older siblings, Charles, Mary (Eva), Roy, Mildred, Allan, Fred, Walter, and Hilda. The Speer homestead was located on the west side of the Sauble River, where the children learned to swim, fish and skate. In time, Peggy welcomed younger brothers Art and Jack. The story was told of how Peggy’s siblings understandably struggled pronouncing the name Marguerite as children and thus Peggy stuck and remained with her for the duration of her life.

The Speer children enjoyed much time together at home on the farm and were educated a mile down the road at Halls Corner School. Peggy had fond memories of returning home to her mother’s fresh bread, covered with a thick spread of butter. Yum! Following Grade 8, Peggy moved to Kincardine, staying with her sister Mildred, where she attended grades 9 and 10. She returned to Tara for the next two years, often staying with Grandma Speer in town. It was during her grade 11 year that Peggy began dating a young man by the name of John “Jack” Percival Ruff. She returned to Kincardine to finish her final year before heading off to Normal School (Teacher’s College) in Stratford, graduating in 1942. Peggy then taught at Bethel School for two years (1942 – 1944), all the while living at the Invermay Store, which her father owned.

Jack joined the Air Force on his 18th birthday, and the young couple was married shortly after on Tuesday, July 4, 1944, at Christ Anglican Church in Tara. Jack was stationed in Malton, and the newlyweds called the upper half of a house in Brampton home. Here Peggy found a factory job until March of 1945, when Jack was transferred to Summerside, P.E.I. The next move saw them experience St. George on the Bay of Fundy, where many memorable memories were made including experiencing the town water pump (where everyone went to get their water to drink and cook) in the middle of the street. After a few more stations, Jack was discharged from the Air Force in the fall of 1945.

After returning to Tara, the young couple rented a portion of Andy Morrow’s home where they welcomed Tom in 1946. Shortly after, they bought the farm from Morrell McMullen. Although it was their own, the house was in rough shape. No hydro, no bathroom, wood stove, and orange crates for kitchen cupboards. The year was 1947. The Ruff family grew the following year when they welcomed Bob. Peggy returned to the classroom, in Invermay when Bob was little. They soon added livestock to their 85-acre farm, with the addition of a couple of dairy cows, horses, and pigs. Having the river run through the farm was a benefit however, a couple of stories were told of times whereby animals needed to be helped out of the river, and the ice, during the winter months. Given Jack worked out, many of the responsibilities at home on the farm fell to Peggy. Her days were kept busy by tending to the animals, gathering wood, working in the garden, and caring for her young family. Peggy was no stranger to hard work and did everything in her power to support her growing family. Annette was welcomed in 1953, followed by Nancy in 1956 and June in 1960.

Peggy often coached the kid’s baseball teams and in time returned to the workforce, finding employment at the Post Office in Tara. In her limited free time, Peggy was active within the Tara Legion Ladies Auxiliary and was later recognized as a life member. She was also active within her church, Christ Anglican, where she was a member of the Guild and choir for a number of years. She was a member of the Crazy 8’s card group, playing euchre weekly in a variety of homes within the Tara area. Peggy also loved cribbage and was a proud member of an Ontario Legion Championship team from Tara. This was an amazing feat, however, it was even more remarkable as Peggy was legally blind when she accomplished this. Amazing! She was also a member of the Sunset (seniors) Club.

In 1984, Peggy and Jack downsized, selling the family farm to Tom and Mabel and moving to 84 Main St. in Tara. This was shortly after Peggy’s retirement from the Post Office, after a 25-year career. Retirement meant more for Peggy and her passions. She enjoyed cooking (and was good at it) with liver and onions being a favourite dish. Together with Jack, they enjoyed dancing and attended a variety of local dances. Peggy enjoyed playing the keyboard, knitting, crocheting, Japanese embroidery as well as painting. Beginning in the 70’s, she and Jack spent the winter months in Lakeland, Florida making many memories. These yearly adventures continued until the early 1990’s. Sadly, it was in 1992 that Jack passed away, leaving Peggy a widow at the age of 70. It was around this period that Peggy took up golf and excelled. To say she was devoted may be an understatement as on one occasion she was struck in the forehead by an errant partner’s shot. With a gash in her forehead, Peggy headed to the hospital for stitches before returning to the course for supper… imagine! I am told this event forever left a dent in Peggy’s forehead. Crazy!

Peggy was a humble, supportive woman who was always young at heart. She had an incredible memory and was a great storyteller, especially when it came to articulating funny jokes. Peggy could be feisty and spontaneous, but I am told it was never smart to cross her… just ask her children! 🙂 She was a strong, assertive woman, who supported her family at every turn. She knew how to move on and forgive and always lived life to the fullest. Needless to say, much could have (and was) learned from the matriarch of the Ruff family. These lessons and stories will live on for generations to come.

Peggy was a huge Blue Jays fan and could often be found watching (and yelling) at the television during the season. She also enjoyed the likes of Lawrence Welk as well as a variety of mystery movies. Peggy was an avid reader and would read a variety of genres and topics. If she didn’t like her current book, she would set it down and pick up a new one. In recent years when her eyesight failed her, her family purchased her an e-reader so she could still enjoy a good story. Many of you will know that Peggy enjoyed her fair share of Fireball Whiskey and was always happy to go out for a nice Chinese dinner. Countless family memories were made during the Ruff’s annual Thanksgiving gatherings as Peggy would take the entire family out for a non-traditional, Chinese meal. She would always pay for their meals but insisted that they pay for their own alcohol… smart woman! 🙂

In 2000, Peggy downsized further and moved into the Speer apartments in Tara. Here she enjoyed spending additional time with friends and family, especially the younger generations of Ruffs. Sadly, in recent years, Peggy’s eyesight had worsened to the point whereby she was considered legally blind. In 2014, she moved in with Nancy and treasured the company. Although they had their own spaces, their time together was very memorable. Just ask Nancy about the time Peggy was found under her rocker… priceless. Peggy wasn’t above laughing at herself, and the story was told countless times in recent years. In 2017, and for her 95th birthday, Peggy and forty-eight of her family members headed to Toronto to take in a Blue Jays game. The Ruff family wore matching shirts, made the jumbotron, and enjoyed a great day together as a family. Although blind, and unable to see the game, Peggy always remained positive and loved the entire day. However, with her health declining, Peggy soon called the McVean Lodge in Hanover home. Here, she was supported throughout Covid and truly gained a second family. Last month, together with her family, Peggy celebrated 100 years, what an accomplishment. She passed away with her daughter at her side, on Saturday, September 10, 2022, just weeks after celebrating her 100th birthday with family.

In lieu of flowers, memorial donations to the Royal Canadian Legion Br. 383 Tara would be appreciated as expressions of sympathy.