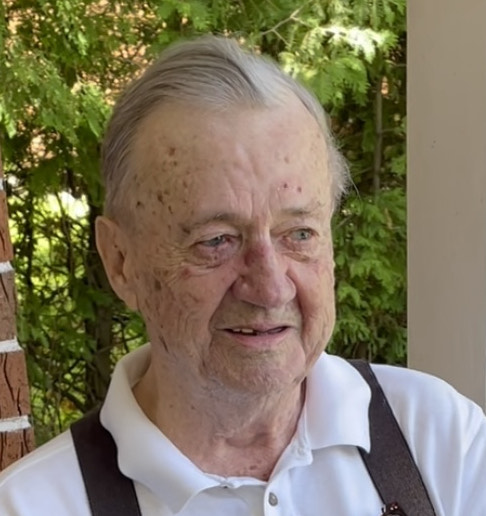 Ronald Edgar was born in Toronto on Wednesday, July 8, 1936, to proud parents Aage “Ed” and Sadie Pauline (Smith) Henson. The Hensons resided on East Lynn Ave. (near Woodbine and Danforth) in Toronto. In 1940, Ron welcomed his younger sister Dianne and the family was complete. Shortly after, he began school, attending Earl Haig Public School, just blocks from home. In 1949, Ron became a pupil at Riverdale Collegiate Institute. As a teenager, Ron quickly realized how naturally gifted he was. Honestly, he was too smart for his own good! Like most of us, he got into his fair share of trouble during high school, even earning suspensions, however, his natural talents allowed him to pivot quickly and often challenge the intelligence of his own teachers. If he applied himself, watch out, the sky was the limit for Ron. During these years he made extra money delivering newspapers as well as working for the local drug store, and from his winnings at the local pool hall. Ron graduated in 1954 with honours.

Later that year, Ron was introduced to a young woman by the name of Frances Gertrude Henderson, by a mutual friend Dean Morphy. Their first date was Sunday, December 19, 1954, whereby the young couple enjoyed a soda and great conversation at a local restaurant. They dated for the next couple of years (on & off) until Fran put her foot down. She wanted to get married. Ron got the message loud and clear. He proposed to her on Monday, February 6th, 1956 and they were married at Hope United Church in Toronto on Friday, February 10, 1956… no joke! The newlyweds lived with Fran’s parents for a few months before getting their own place.

By this time, Ron was working his way up the ladder at Maple Leaf Foods. His fantastic memory and exceptional intelligence allowed him to excel, and that he did, becoming a chemist by trade. Back at home, the Henson family was growing, with the arrival of Ronald Jr. (1957), William (1961) and Laurie (1963.) In the early 60’s Ron and Fran relocated their family to Frenchman’s Bay (now Pickering) where they settled into the community. Ron made a change at work and joined the team at PRC Canada Inc., with a home base in California. It was also during this time that Ron became a Navy Reservist, serving on the York. A position he held until 1964. Back at PRC, Ron once again moved through the ranks, quickly before becoming Vice-President and General Manager of their Canadian operations. In fact, he was even asked to relocate to California, but Ron would have none of that, preferring to keep his family in Canada. For the next 22 years, Ron did a lot of traveling with work, experiencing Hawaii, Denmark, Spain, Germany, France, England, and much of North America. If that wasn’t enough, together with Fran, they explored Florida, California, and Alaska. Ron loved his road trips, whether it was an afternoon drive, a trip around the Great Lakes, or a camping trip up north. If Ron was on a road trip, he was usually happy!

Ron loved the sport of baseball and gave countless hours to coaching and managing the sport. His crowning achievement came in 1965 when he led the Bay Ridges Midgets to an all-Ontario Rural Softball Championship. Ron also loved golf and got out on the course whenever he could. He and some of his friends often made the yearly trek to Myrtle Beach in October to enjoy the links. Other pastimes for Ron included crossword puzzles, jigsaw puzzles, and his stamp collection, which he shared with Laurie. In fact, in recent months he passed his collection down to his grandson Steve. He also loved his gardens and watching the flowers bloom.

In 1975, Ron and Fran relocated with their family to Georgetown and settled into the community. Ron worked hard to provide for his family, but equally enjoyed himself along the way. He was a fabulous storyteller, with many of his tales beginning with, “Back in my day…” His unbelievable memory allowed him to include intricate details that few could remember, however it all added to the overall story. If it wasn’t a story, Ron often shared his wisdom, which benefited everyone!

Ron left PRC in 1991 and moved on to the next stage of his life. Together with his son Bill, and Fran, the threesome established Henson’s Ex-ce-lawn Care. They serviced Georgetown and area for several years before formally retiring in 1994. A couple of years later the Hensons moved north, to the small community of Chesley, and called it home. It was here where Ron became involved with the Legion, becoming a Board member, and later the treasurer. His natural gifts were a blessing for the local Branch as he helped them to better position themselves moving forward. Retirement also afforded him the luxury to do and enjoy what he wanted. Anyone who knew Ron knew of his love for music. It didn’t matter if he was down in the basement making his next CD, playing his beloved harmonica, or listening to some of his Big Band favourites, if music was playing Ron was at peace. Ron also had a soft spot for movies. Although never picky, musicals, historic war films, and Casablanca were favourites. Ron’s father served on the HMCS Huron, and therefore Ron had a soft spot for this ship. He became a member of the HMCS Huron Association, and together with Fran, traveled for many years to their annual conventions throughout Ontario. Ron was a true walking historian when it came to discussing this ship.

When reflecting on Ron’s life, who can forget the memorable street parties in Bay Ridges, or his annual New Year’s party, which was never complete without the game, name that tune! Guess who always won. … you got it, Ron of course! It should be no surprise that Ron’s brilliance led to him being referred to as “Mr. Jeopardy.” He loved Christmas eve and their traditional Danish smorgasbord, which always included the schnapps, pickled herring, smoked eel, open-faced sandwiches, and lots of “Skols”. Other favourites included steak tartar, banana splits, and a nice glass of CC and ginger.

Ron was a loving, generous man, who could also be a TAD bit stubborn at times. He enjoyed a diverse group of friends and always remained loyal to them. He treasured family time with his children, grandchildren, and more recently, great-grandchildren.

In recent years, Ron became a caregiver to his beloved Fran. He took great pride in this responsibility and did everything he could to support her in their home. Sadly, her death, only eight months ago, was heartbreaking for Ron, and in recent months his own declining health caught up to him. Thankfully, although his body began to fail him, his mind was sharp as a tack, and he was seen playing his beloved harmonica in the hospital only days before his death. Ron passed away at South Bruce Grey Health Centre, Chesley on Sunday, June 5, 2022. He was 85 years old.

Loving father of Laurie (Bryan) Robinson of Acton. Ron will be dearly missed by his grandchildren Judy Robinson (Abner Cotter), Sarah Henson (Brandon Peckham), Steve Henson (Emily Lalonde) and Darlene (Tyler) Scharf as well as six great-grandchildren, Larissa, Sebastian, Oliver, Andrea, Abigail and Benjamin. He will be fondly remembered by his sister-in-law Linda Buckley, as well as by his nieces, nephews, and friends. Ron was predeceased by his wife Fran (2021), son Bill (2006), sister Diane (Dan) Rooney and his parents Aage (Ed) and Sadie (Smith) Henson.

A memorial visitation honouring Ron’s life will be held at Rhody Family Funeral Home, Chesley on Saturday, June 11, 2022, from 2 – 4 p.m. A celebration of Ron’s life will follow at a later date in Acton. Inurnment in Greenwood Cemetery, Georgetown.

In lieu of flowers, memorial donations to the Chesley Hospital Foundation or Cancer Assistance Services of Halton Hills (CASHH – cancerassistance.org) would be appreciated as expressions of sympathy.