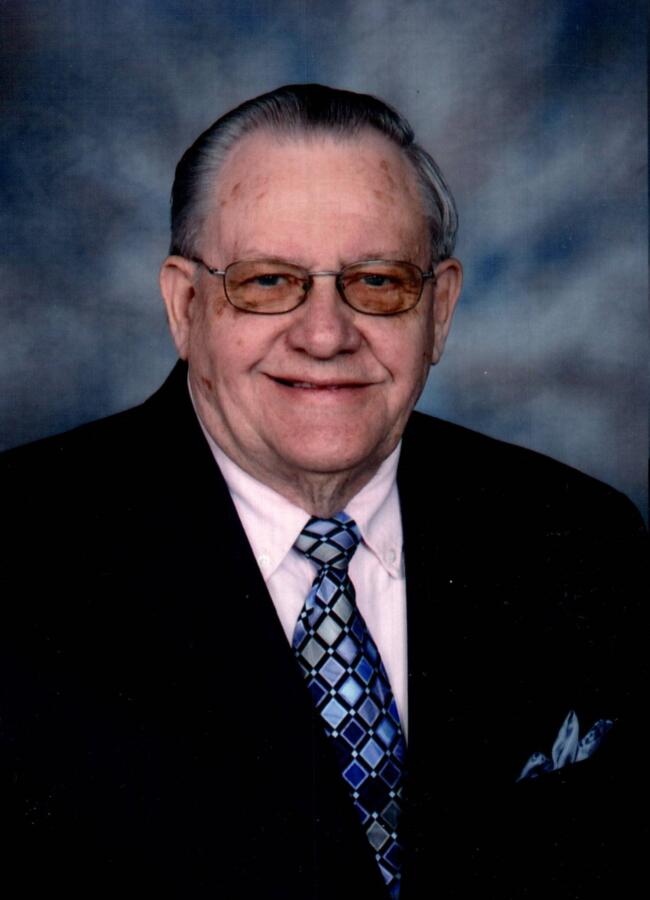 “Find something you love to do and you’ll never have to work a day in your life!”

That is exactly what Ron did!

Ronald Albert Henry was born on Friday, February 8, 1935, in Walkerton. He spent his childhood growing up between Walkerton and Hanover whereby he attended Walkerton Public School. It was during this period that Ron took a liking to live theatre and even performed in a few productions at the Jubilee Hall in Walkerton as a young man. Ron also loved cars, especially his red hard-top Ford. He enjoyed driving the car to Sauble Beach with friends and family. Who could forget those street dances?

Ron was introduced to the bakery by his uncle Bert (Schultz). Schultz Bakery was located on Main St. in Hanover and Ron quickly fell in love with the work. He most enjoyed decorating cakes, and preparing Cinnamon sticks, fruit cakes, and cream pies. Along with the work Ron also fell in love with Eva Brodhagen. The couple tied the knot on Saturday, July 6, 1968, at St. Matthew’s Evangelical Lutheran Church in Hanover, followed by a big party at the Brodhagen family farm. This occurred during the great beer strike! Thank goodness for the help of friends, family, and the Formosa Brewery!!!

After their marriage, Ron purchased the bakery from his uncle Bert. Life was busy and working 12 – 14 hour days five plus days a week left little down time. He was always very appreciative of his amazing staff and loved to give back where he could. This often saw Ron donate baking left on the shelves on Saturday afternoons to those in need. Likewise, if someone was looking for work, and Ron had a task they could handle, he would happily employ them.

In his limited free time, Ron enjoyed Smelt fishing, snowmobiling in his younger years, and spending time at Sauble Beach and Bass Lake. He also loved a good game of cards with Solo being a favourite. Life forever changed, for the better I might add, on Monday, August 19, 1974, when Ron and Eva welcomed their daughter, Christine. Ron was up to the task and juggled the role of fatherhood with his busy work commitments. Sunday was always a church and family day, whereby time was spent with Eva, and Christine and with visits to friends and family often thrown in as well. Every summer, the bake shop was closed for the two first weeks of July, whereby Ron and the girls often went camping or enjoyed a road trip. Through the years these excursions allowed him to see much of the U.S. and a great deal of Canada. Those close to Ron know how much he appreciated car rides, and it didn’t matter if he was driving or sitting back and relaxing in the passenger seat. He was truly a simple man, as he could find enjoyment in a simple trip to the dump! Now it should be noted that Ron rarely parted with anything. He was the ultimate recycler and never wasted anything… even the leaf bags, just ask Brian! All joking aside, Ron was a quiet man, who always put the needs of his family before his own. He was always kind, methodical, and patient, with an eye for detail.

In the early 2000’s, Ron experienced some health challenges and retired, selling the bakery. Although initially challenging to adapt to a new way of life, in time, he did just that. This often meant more time listening to his beloved AM 920 or relaxing in front of the television. Some of Ron’s favourites included Two & a Half Men, People’s Court, Dallas, Dr. Phil, Dr. Oz, Grand Ole’ Opry, and who could forget the news!

When Cooper was born, there wasn’t a prouder grandfather. The two of them soon created a special bond and thoroughly enjoyed their regular trips to McD’s. They spent countless hours building cardboard cars, snowplows, and even bridges at Pa’s sand table. More recently, Ron passed on his car to Cooper, allowing him to enjoy what Ron could no longer.

In recent years, Ron became the caregiver, supporting Eva, and allowing her to stay at home with him. He was thankful that he could care for his wife but as he aged it took its toll on him as well. Sadly, in May of 2021, Ron suffered a severe stroke and life would never be the same. Together, he and Eva soon called Rockwood Terrace their home, enjoying visits from family. In recent weeks, Ron’s health worsened, and he passed away surrounded by his loving family at Rockwood Terrace, Durham on Wednesday, July 20, 2022, in his 88th year.

Beloved husband of Eva (Brodhagen). Loving father of Christine and her husband Brian McGilveary of Hanover. Beloved Pa of Cooper. Ron will be dearly missed by family friend Joan Martin of Sauble Beach as well as the entire Schultz and Brodhagen families.

A private funeral service honouring Ron’s life will be held with interment to follow in Hanover Cemetery.

In lieu of flowers, memorial donations to St. Matthew’s Evangelical Lutheran Church or Rockwood Terrace would be appreciated as expressions of sympathy.