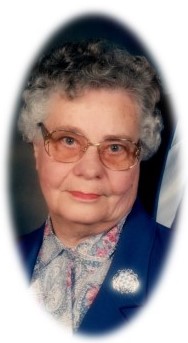 Ruby Eleanore was born to parents, Louis and Eleanore (Lange) Pegelo on August 27, 1924. She joined older siblings, Elmer (1920) and Lila (1922) on the family farm on the outskirts of Chesley. The Pegelo family mixed farmed in addition to owning and operating a gravel pit. Ruby told many stories of the meals she prepared for the young men working for the family. She attended both public and high school in Chesley. Following high school, Ruby worked for W.D. Bell as a caregiver at Parkview Manor.

It was during her teenage years that Ruby’s sister, Lila, was seeing a young man by the name of Arnold Knapp. As luck would have it Arnold had a brother, Morris, who soon caught Ruby’s eye. They soon began dating and were married on April 26, 1943. The newlyweds immediately called the Knapp family farm home on Lot 23, Concession 12 in Sullivan Township. The Knapp family soon began to grow with the arrival of Larry in 1944, followed by Gerald (1948) and the twins, Ronald and Reginald (1954). As you can imagine Ruby had her hands full…. right boys? There were at least a couple of times where the boys got the best of her though! On one occasion, the boys got into mom’s 50 lb. bag of sugar in the upstairs closet. They were playing with their tractor and manure spreader and proceeded to spread half of the bag across the upstairs hall. Yikes! There was also the time when the twins began an egg fight in the kitchen (with the eggs mom was about to take to town). Needless to say, these are but just a couple of memorable occasions with their mom during their youth.

In addition to caring for her young family, Ruby helped Morris where she could on the farm. They raised pigs, chickens, and beef before going into dairy in later years. When time allowed it, Ruby enjoyed spending time outside in her flowerbeds. She was also known for her talents in the kitchen. I am told no one ever went hungry as she always prepared a large meal. Ruby was especially known for her butter tarts and pies. Through the years she also collected a variety of spoons and even packets of matches. She did not smoke, yet had a drawer in the house that was full of a variety of unique match packets.

In 1994, Ruby and Morris left the farm, allowing Reg to take over the operation. They quickly settled in Chesley on Tower Rd., where they loved their home and neighbourhood. They spent more time hosting large family gatherings in their home and spending additional time with the grandchildren whenever they could. Retirement also allowed for more time to travel, and that they did! Through the years they traveled much of the U.S. by car, bus, and camper. Destinations explored included Oregon, Florida, the Carolina’s, and Nashville to name a few where they took in the Grand Ole Opry. It shouldn’t be a big surprise that Ruby loved her music, particularly country, and could often be found tapping her foot to the music no matter the location.

Ruby’s strong faith was ever-present and played a vital role in her life. It began in her youth where she and her family attended church regularly. This was followed by her confirmation, marriage, and then bringing the boys up in a faith community. Together, Ruby and Morris were members of St. Mark’s Lutheran Church in Chesley. They attended regularly until with age they were no longer physically able to do so.

Ruby was a loving, caring woman who always put the needs of her family before her own. She could also be quite comical, enjoying a good joke and often kidding with those around her. Ruby also had some luck! On three separate occasions throughout her life, she won draws at Denomy’s in Chesley. She was adamant she only needed one ticket, and she was often right! In total, she won a fireplace, radio, and a dryer through the years. I am told this luck was not passed down to the next generation though… right boys?

Sadly, Ruby and Morris’ oldest son, Larry, died suddenly of an aneurysm in 1998. As you can imagine, it is never easy losing anyone in your life, not to mention a child, so they resorted to their strong faith and helped their entire family through this difficult time. In 2010, Ruby and Morris made the move to Elgin Abbey, calling it home. Morris’ health soon began to decline and he passed away on March 6, 2012. Although heart-broken Ruby continued to make the most of each day in the years that followed. Often she could be found in the halls challenging fellow residents and staff members to wheelchair races or just enjoying their company. She also enjoyed the many visits from family and friends. Sadly, in recent weeks her health declined further and she passed away on Saturday, December 26, 2020 in her 97th year.

Unfortunately, due to the pandemic, private services will be held with interment to follow in the Chesley Cemetery in the spring.

Memorial donations to St. Mark’s Lutheran Church would be appreciated as expressions of sympathy.

Truly sorry for your loss

Condolence to the Knapp family .

We extend our sympathy to your family on the passing of your Mother.

I so enjoyed getting to know Ruby during my time working at Elgin Abbey a few years ago. She was so fun and always a delight to visit with! She will be missed.

We are sorry to hear of Ruby’s passing . Was a great joy to visit with her. May God be with you at this time.

So sorry to read of Ruby’s passing she was a lovely person . My sympathies to the whole family.
The last of Aunt Laura and Uncle Louie’s children have now joined them in their heavenly home.
Peace and Love to all.
Bill

Reg and Jan and Families – very sorry to hear of your loss, our thoughts and prayers are with you all through this difficult time

Reg and Jan ….Chris and I would like to give you our deepest condolences on your moms passing….In her early years at Elgin Abbey she talked so much about Peabody and her children

Our condolences to the Knapp family. xx

Sending the sympathies we can’t give in person at this time.
Ruby was such a kind lady, she always had a treat and a smile for the girls next door.
Thinking of you all.

My sympathy to Jerry, Reg And Ron And your families. I have many fond memories of your Mom, grandmother, great grandmother. She was a kind, thoughtful and caring god mother to me.

Jerry,Reg and Ron, so sorry to hear of the passing of Aunt Ruby.
So many happy memories of being with her on the farm. Always had a big hug and kiss when we got there. Always smiling and trying to feed us. She always seemed so happy!
When it was time to leave there would be a tear in her eyes.
Love ❤️ you forever Aunt Ruby. Uncle Morris will be waiting for you with open arms.

Sending most heartfelt condolences to the Knapp family.