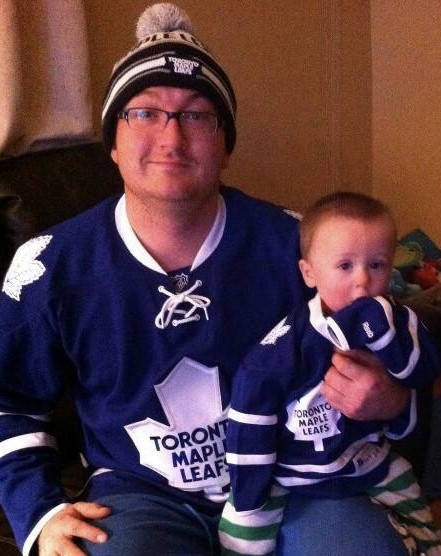 Ryan Donald Henry was born on June 12, 1989 in Orangeville. He was welcomed into the world by his parents Jerry Henry and Patricia Wood. At the time, they lived in Shelburne until moving to Sullivan. Ryan was an only child for five years before his brother Dylan and sister Meghan were born in 1994.

Ryan attended Sullivan Community School and then attended Chesley District High School. When Ryan was younger, he worked on a farm in Keady for Carl Spencer. He was driving a tractor by the time he was 8 years old! Ryan was a child who loved to work hard (which was something that never changed as he got older).

Carpentry was a great fit for Ryan as it was something he excelled at, working with his hands. He then went on to do construction and eventually owned his own construction and roofing company for over a year. One of Ryan’s dreams was to take the heavy operators course, however he never got the opportunity to do so.

Ryan had a passion for playing hockey, playing for a league in Keady. He was a huge fan of the Toronto Maple Leafs! He also loved swimming and being in the water any chance he got. Ryan enjoyed playing the piano. He enjoyed any chance that he had to be on the ATV, dirt bike, motorcycle, or anything that he could drive that was loud and FAST. If you ask his dad, there was a time where he had a hard time knowing the difference between the clutch and the brake!

The outdoors was somewhere that Ryan loved to be. He was always happy any time that he had to go swimming, go hiking, or gardening. Ryan enjoyed cooking, baking, canning, but his specialty was barbequing. He was someone who had a champagne taste on a beer budget. If anyone was lucky enough to have Ryan barbequing them steak, lamb or seafood, you know it was something that left everyone always wanting more!

On February 15, 2013, Ryan’s life changed forever, in the best way. This was the day his son Carter was born. Carter was the joy in Ryan’s life, and he always strived to be better for Carter. Carter was someone that Ryan cherished and loved more than anything. He passed on his love for the Toronto Maple Leafs to Carter and any chance they had to watch the game together or spend time outdoors was something he valued.

Growing up, Ryan was a typical older brother who didn’t love to have his little sister following him around. Despite their differences, Ryan was Meghan’s biggest protector. She remembers several times in school crying and begging her teacher to take her to Ryan. He always looked mortified in front of his friends that his little sister was coming to him crying and begging for a hug. But he always gave in and did it even though he was embarrassed. There were also several nights that Meghan would crawl into Ryan’s bed to sleep. His protective nature never changed as they got older. He was always there if she needed him and he would do anything for his little sister. Even though he drove Meghan crazy most of the time, he could always make her laugh. Ryan could annoy her like no other person in this world but he was the best big brother.

Generous, funny, kind, charming, thoughtful, hardworking, witty, clever, smart and determined were some of the many words to describe Ryan. Ryan had a big heart, and he would do and give anything for the ones he cared about. Ryan had a nickname for everyone he met. His mom was “Big Mama”, his dad was “Old Man” or “Old Boy” and his sister Meghan was “Magoo”, to name a few. He could tell a story so well that it always made everyone want to spend hours with him to see which story he would tell next. Ryan was always so loved by his family and friends.

Despite Ryan’s history of substance abuse, he was very determined to get better and was successful at doing so for nine months. He made several friends along his journey to recovery who helped support him. Despite his greatest efforts, Ryan passed away suddenly on July 17, 2021

Ryan was the cherished son of Patricia Wood (Alvin Stephen) of Chatsworth and Jerry Henry of Wiarton. He was the proud father of Carter Henry. Loving brother of Meghan Wood (Telford Ferris) of Owen Sound and Dylan Henry (Rachel) of Fergus and step-brother of Lisa Stephen Slot of Wiarton and Brad Stephen (Michelle) of Kilsyth. Ryan will be missed by many aunts, uncles and cousins.

A private funeral service will be held. A celebration of Ryan’s life will be held at a later date. Cremation has taken place. In lieu of flowers, donations for a trust fund that will be set up for Ryan’s son Carter (please make cheques payable to Meghan Wood) would be appreciated by the family.

Ryan was a strong family man, and heart of gold. Revis will never forget the dog bone joke Ryan played on him. Our condolences during this very difficult time. 💙

May our thoughts and prayers be with you,
not easy to put into words….

Sorry for your loss Pat & Al and family . RIP Ryan

I knew Ryan for a short time in Ottawa. He was a very nice man and easy to like.
Condolences to the family.

Thinking of of all of you …..may the many moments that made you smile 😊 help in the coming days

Jerry, our hearts go out to you in your time of sorrow. May the memories of Ryan help you find peace.

We were so very sorry to hear of Ryan’s passing away. Our thoughts and prayers are with you all at such a difficult time.May Ryan rest now, and we hope your memories will be a comfort to you all.

R.I.P. Ryan. Condolences going out to Jerry and Family and Pat and Family. Ryan you will be missed and every time I hear someone talk about Toronto Maple Leafs it will remind me of you.

So sorry Jerry for the loss of your son. Sending you big hugs and prayers

so sorry and sad for Ryan`s family. I babysat Ryan when he was 2. Heartbroken.

We are very sad to hear of the passing of Ryan, our condolences to you Aunt Pat and to the rest of your family.

Pat and Megan my heart is broken to hear off Ryan’s passing. My thoughts and prayers are with your family.

My heart is breaking to hear this. I am so sorry for your loss. I am thinking of you Pat and Meghan!

Oh Meghan. There are no words. Please accept our deepest condolences.

So sorry for ur loss.

I am so sad 😢. My Heart and Prayers are with You’s

I am so sorry to hear about Ryan. I enjoyed having classes with him at CDHS. Thinking of his family at this time.