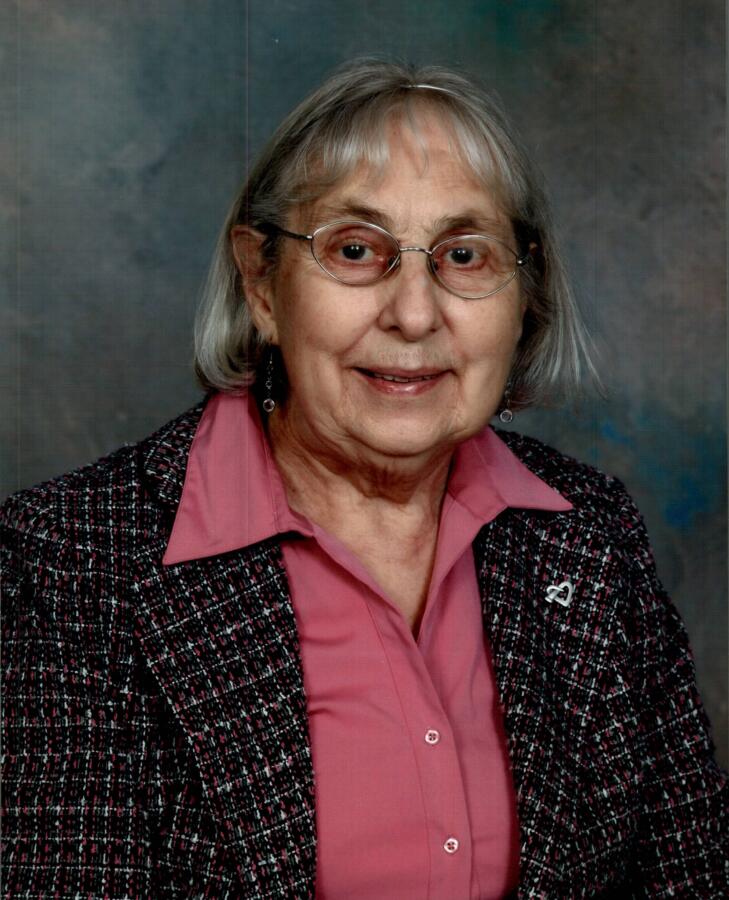 Shirley Louise Marie was born at home, in Sullivan Township, on Wednesday, January 31, 1934. She was welcomed into this world by her parents, Ezra and Elsa (Guse) Klages, and was later joined by younger siblings, Audrey (1939) and Jerry (1951). Ezra worked in a variety of millwork through Shirley’s early years, so the Klages family endured many moves, with stops in Desboro, Owen Sound, and Kitchener before settling on Grey Rd. 40 north of Desboro. Although the kids experienced several elementary school settings, they attended only one high school, located in Chatsworth.

The Klages’ were active members of St. John’s Lutheran Church in Desboro, where Shirley was confirmed. It was in this setting where Shirley was introduced to a fellow parishioner five years her senior by the name of Armond Leslie Lang. The two soon began dating and were wed on Saturday, December 9, 1950. The newlyweds soon called Lot 13, Concession 10, (just off Grey Rd. 40) in Sullivan Township home.

Shirley adored children and therefore enjoyed being around them as often as she could. As a teenager, Shirley began teaching Sunday School, which she thoroughly enjoyed. It wasn’t long before Shirley and Armond welcomed children of their own beginning with the arrival of Glen in 1952. The Lang family continued to grow with the arrivals of Marlene (1953), Elaine (1954), Eric (1958), and Ellen (1966). Even though Shirley kept very busy with her young family she often remarked that she had always wanted to have seven children, even entertaining the idea of fostering or adopting more children. As the children grew, Shirley became involved with 4-H. Here to she enjoyed helping and supporting not only her children but those enrolled in the program. As a leader she taught countless courses, remaining in this role for approximately 40 years. What a commitment!

Back at church, when not leading a Sunday School lesson, Shirley could often be found preparing for next year’s Vacation Bible School. Unlike most, Shirley worked tirelessly throughout the year preparing for this one week. She was very artistic and loved to challenge both herself and the children with a variety of crafts. They could include painting, or even building something, but they were always unique. In fact, Shirley kept two books showcasing these beautiful creations through the years and often leafed through them with very fond memories. Her dedication to children and their education never wavered, as she remained active in both VBS and Sunday School classrooms well into her 70’s. What a devotion and accomplishment! Her support of youth did not end there as for many years Shirley also volunteered her time at Sullivan Public School. Here she settled into the role of a speech therapist assistant, spending a few mornings a week supporting those most in need.

Shirley was an avid sewer, and made countless wedding dresses, bridesmaid dresses as well as clothing for the grandkids and even their dolls! 😊 She loved working in her vegetable garden and produced award-winning (at the Desboro Fair of course) fruits and vegetables through the years. Shirley also preserved many fruits and vegetables.  Lastly, who could forget Shirley’s bread? On occasion, she would make up to 24 loaves at a time… wow!

Shirley loved nature and in particular the spring months when everything came alive again. She was an avid collector of rocks and leaves and always enjoyed being one with nature. It should be no surprise then that her favourite colour was green, as well as purple! Although much of her travelling was later in life, Shirley saw much of Canada and always enjoyed trips west to see Glen and his family. She loved to read and could often be found reading the newest edition of Reader’s Digest or better yet, her Bible. The kids have many fond memories of Mom reading to them as well, or even helping with homework and reading assignments, Shirley was always there for encouragement and support! This encouragement was also seen through prayer, whereby Shirley prayed regularly with her children. She taught them not only to love their Lord but to pray often as well!

Her dedication and commitment extended well beyond just her family. Together with Armond, Shirley delivered mail from Desboro to Keady, then Marmion, before back to Desboro. This routine continued five days a week for over twenty years. She was also an active member of the Ladies Aid and Lutheran Women Missionary League. And if that wasn’t enough, Shirley (and family) acted as caretakers of their church, Faith Lutheran, for many years. When it came to entertainment and television, Shirley enjoyed watching Saturday Night at the Movies and the children recalled sitting in the living room for most Sunday dinners watching Walt Disney family hour.

In 1992, Shirley and Armond began building their retirement home in Desboro. The following year it was complete and soon called it home. Having an empty nest was a challenge for Shirley. Sure, there was her involvement at the school, and children and grandchildren stopping in regularly but there was still a void.  Shirley loved dogs and had many K – 9 friends that kept her company for many years on the farm and in Desboro. Sadly, simply put, Shirley was lost after her husband’s death in 2014. Although constantly supported and surrounded by her family, Shirley needed more. Luckily, she found the Day Away program where she once again thrived. She enjoyed socializing and the interactions with others so much that at one point she was attending five days a week! Unfortunately, in the last couple of years, her age caught up with her, and Shirley soon called Central Place in Owen Sound home. Here she lived out her remaining days supported by family and friends.

In lieu of flowers, memorial donations to Lutheran Laymen’s League of Canada, Home & Community Support Services (for Day Away Program), or Autism Ontario would be appreciated as expressions of sympathy.