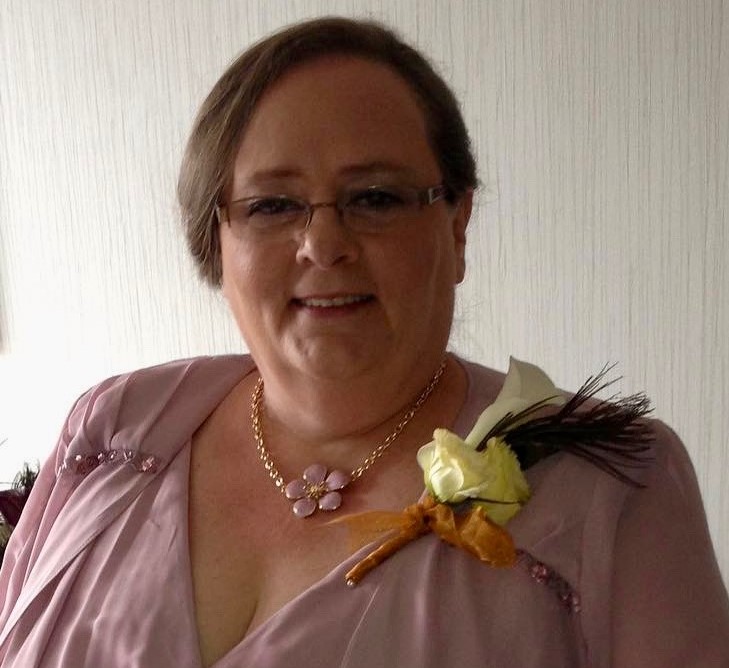 Wendy Anne Saul was welcomed into the world by parents William “Bill” Parker Saul and Jacqueline Inez Saul on New Year’s Eve of 1959 in Orangeville. She was born the fifth of six children, Gary, Randy, Richard, Dianne, and then followed by Judy. As Wendy was growing up, the Saul family moved between Erin and Hillsburgh where they owned a small farm and ran a general store.

Wendy attended Guelph Collegiate Vocational Institute and graduated in 1977. Her parents along with her sister, Judy, moved to Cochrane when she was 17. However, Wendy being the strong and independent person she was, made the decision to move to Guelph with her sister Dianne instead of moving with her parents. The same year she graduated, she started working for The Co-operators, where she ended up staying for her entire career for over 40 years.

Wendy married her first husband Ken on April 30, 1980 when she was 20 years old and that same year, they welcomed their first daughter Breanna on October 19th. Soon after, they welcomed their second and final daughter, Krista on June 30th of 1985. They made the difficult decision to divorce in 2002, which was hard on the family, but Wendy worked tirelessly and sacrificed a lot to make sure that there was always food on their table and a roof over their heads.

In 2004, Wendy met Steve Morton. When they met in person, they hit it off instantly and got married on February 27, 2006. Looking for a new adventure, they moved to Miller Lake in January of 2010 and bought a Bed and Breakfast called the Cloud 8 B&B. Wendy loved living by the lake and living on the Bruce Peninsula.

In February of 2012 there was an electrical fire at the Miller Lake home that started on the opposite side of where Wendy’s bedroom was located. Realizing what was happening, her Beagle, Emma, barked constantly at Wendy until she woke up. When she woke up, the house was pitch black, so Emma guided Wendy out of the house, and thankfully saved her life that day.

Just after the fire took place, Wendy was also the caregiver for her sister Dianne who was in palliative care, and Dianne’s husband, Remi, who was also going through health issues. Bill and her stepmother Grace also lived with her and Steve at the time. Between still working online for The Co-operators and taking care of her family, she proved again how tough of a woman she truly was, always putting others before herself. During this time that her sister Dianne was terminally ill, her daughter Krista was getting married in Thunder Bay. She wanted Dianne and Remi to be able to attend, so they drove from Miller Lake to Thunder Bay, making numerous stops along the way, making sure that they had one last memorable experience together.

In 2016, Wendy and Steve bought their dream home in Chesley. When Steve and Wendy moved to Chesley, it was everything she always wanted in a home and more. It had the most beautiful woodwork in the home and the backyard was their special oasis. They installed a pool where you would often find her.

It is easy to tell that if Wendy was anything, she was strong, tough, selfless, loyal, caring and independent. She was an amazing cook. She loved cooking for all those who visited their home. Comfort foods was her specialty, but her family particularly loved her breakfast hash. Whenever the kids and their families were at Wendy and Steve’s to visit, they knew that they would be well fed. Wendy also loved Christmas. She would often keep Christmas decorations up until after St. Patrick’s Day, which would cause her kids to tease her, and they found creative ways to take the decorations down behind her back.

Wendy loved to play games (card games, board games, dice games, crokinole etc.) and passed that love along to her girls. A common phrase in Wendy’s family was “There is no kin in cards!”, as Wendy and her girls were always very competitive with each other.  During the pandemic the family would often play games together online to help everyone not feel so alone and isolated from each other.

Wendy was the type of wife, mother, individual, who would put her family and loved ones above anything else. She always wanted the best for her girls and wanted them to have the most out of what they had. Wendy had such a love for her entire family, and that love grew even more when her grandchildren and step-grandchildren were born. Wendy had a special relationship with her granddaughter, Danika. She was so happy and proud to be Danika’s Grammaduke. They talked on video calls almost every single day and Danika often referred to Wendy as her “grandma in a box!”.

Wendy had been going through health issues in her life and started not to feel well in the last couple of weeks of her life. Sadly, she passed away unexpectedly in her home on Wednesday, November 24, 2021 at the age of 61. Beloved wife and best friend of Steve Morton. Loving mother of Breanna Ferguson of Kitchener and Krista McAllister (Jeffrey) of Thunder Bay, and stepmother of Lindy Biega (Stephen) and Steve Morton (Bethany). Proud grandmother of Danika, and step grandmother of Holly and Leah. Dear sister of Randy Saul, Judy Knight (Rev. Raymond) and Gary Saul (Joanne). Loved stepdaughter of Grace Saul. She will be missed by the Saul & Morton families and her many friends. Predeceased by her parents Bill and Jacqueline Saul, sister Dianne Larouche (Remi) and brother Richard Saul.

Cremation has taken place. A celebration of Wendy’s life will be held at a later date.

In lieu of flowers, memorial donations to the Grey Bruce Animal Shelter would be appreciated as expressions of sympathy.