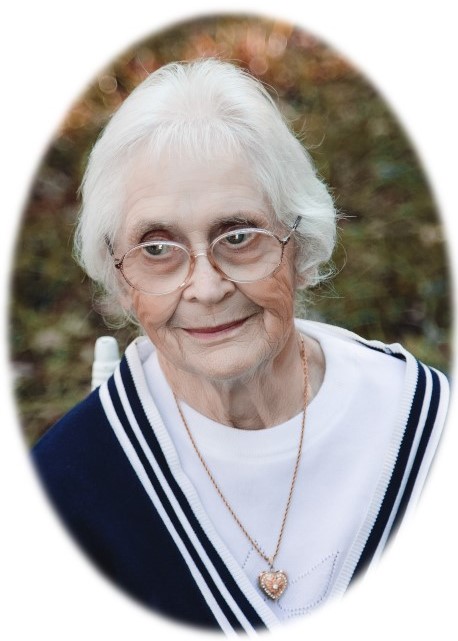 “Where can I go from your Spirit? Where can I flee from your presence? If I go up to the heavens, you are there; if I make my bed in the depths, you are there. If I rise on the wings of the dawn, if I settle on the far side of the sea, even there your hand will guide me, your right hand will hold me fast.” (Psalm 139:7-10)

Beulah enjoyed a strong faith and the grace of the gospel. Accomplishments were always celebrated, she prayed when there were struggles and was a steady and faithful presence to all those around her. Beulah will be dearly missed but we know she is rejoicing in Heaven with our Lord and Saviour.

Beulah Mae was born at home, on the family farm, on February 3, 1931. She was welcomed by her parents William and Sarah (Emke) Rody. The Rody family mixed farmed on the 8th of Brant. Sadly, Beulah lost her only sibling, a brother, in infancy. She attended Williams School on the 6th of Brant. While attending public school she was known to ski to school in the wintertime. She later attended high school in Walkerton.

The Rody family attended the Evangelical United Brethren Church in Elmwood. Beulah often attended church socials and on one such occasion, at Carrick Camp, was introduced to a young man by the name of Lloyd Thomas James Newton. In time, the two began dating and were later married on September 24, 1952 in Clifford. Clifford remained home for the newlyweds for the first few years, before they took over the Rody family farm in 1956.

The Newton family soon began to grow with the arrival of Doug in 1954. He was followed by younger brothers Paul (1958) and Peter (1963). Beulah kept very busy caring for her young family and assisting Lloyd on the farm. In her limited free time, Beulah loved gardening. She enjoyed growing her own flowers and vegetables, and could often be found out in her garden when family and friends stopped by for a visit. Beulah was also a crafter and enjoyed quilting, crocheting, and sewing her own clothes, just to name a few. She was an accomplished cook with her date cookies, mac & cheese and potato salad being family favourites. She enjoyed her coffee, tuning into the Weather Channel and taking in religious programming when she could no longer attend church on her own. Beulah had a soft spot for four-legged K-9’s and enjoyed their companionship and love.

In the late 1960’s Beulah took a job as a personal support worker at Densmore Nursing Home in Hanover. In later years, she moved on to work at Hanover Care Centre and remained there until her retirement in the early 90’s. Sadly, tragedy struck the Newton family in December of 1979 when Beulah’s youngest son, Peter, died in an automobile accident. It was in these difficult times that Beulah relied on her strong faith and kept her family close. In 1980, Lloyd and Beulah moved off the family farm and soon called Dirstein St. in Elmwood home.

Beulah was a quiet person who was fiercely independent. After losing her beloved husband Lloyd in 1994 and being widowed for 27 years, she again relied heavily on her strong faith. For many years she was an active member of the Hanover Missionary Church. She enjoyed and maintained her own home well into her 80’s and could be seen driving around town in her standard green Volkswagen. She loved being part of several family trips across the country; her last being to see her son in Alberta in her 87th year. She loved going for drives and exploring with special, long-time friends Vida and Glen McCracken and going for those after church meal dates with Lynn Crossman. Family, however, was most important in Beulah’s life. She would do anything for them and was extremely proud of all her children and grandchildren.

Our sincere thanks to staff at Maple Court Retirement Residence in Walkerton and Rockwood Terrace Long Term Care Home in Durham who compassionately cared for mom over the last year. Your kindness will never be forgotten.

Beulah passed peacefully into Heaven, with family by her side, on Monday, January 11, 2021 in her 90th year.

Loving mother of Douglas, Paul (Suzanne), and a daughter. Cherished grandmother of Emily Newton (Todd Bahri), Hannah (Mike) Robinson, Charlotte (Silas) Graham, a grandson and special Great-Grams to Eli and Ava Robinson. She was predeceased by her husband and best friend Lloyd Newton (1994), son Peter (1979), parents William and Sarah (Emke) Rody and a brother in infancy.

A private service honouring Beulah’s life will be held in the spring with interment to follow in the Elmwood Cemetery. As expressions of sympathy memorial donations to the Alzheimer Society or Compassion Canada would be greatly appreciated.

Our deepest sympathies to Beulah’s family. My God give you the strength to get through your days of sorrow. From the Schwippl family (Annita Rody, Eric Schwippl, Marie Hurst & their families)

T0: Paul, Suzanne, Emily, Hannah , Charlotte and families:
Please accept our sympathy on the death of Beulah. The pain of losing someone so close can seem unbearable, but we hope you find comfort among your family and friends, and cherish the many memories as you move forward. Our thoughts and prayers are with you at this difficult time.
Rick & Bente Plantt – I Thss.:4 13-18

My deepest sympathy, you are all in my thoughts and prayers

Beulah was indeed a wonderful woman. She worked with my mother at Densmore`s nursing home then Hanover Care Centre. She will be missed. My condolences to all of you.

Sending our sympathy to the family during this difficult time. Fond memories of Lloyd and Beulah coming into the Elmwood Lunch for a meal many years ago.

Our thoughts are with Beulah ‘s family at this time.

Deepest sympathy to the family on the passing of your Mom. Beulah always had a smile and loved to chat about life on the 8th of Brant as well as when she lived in Elmwood.

Our thoughts and prayers are with you. We rejoice that Beulah is at home in Heaven. I (Joyce) have fond memories of Beulah as she was my eldest cousin. May the Lord give you comfort, peace and strength at this difficult time. With love and sympathy.

Beulah was my (Elsie) ‘older’ cousin who I always looked up to and admired as a child. Her kind and sweet personality always shone through on the occasions that we connected over the years since that and we both appreciated her sincere and gracious words. She lived out her faith.

Even though we are assured that she is happy in her Heavenly Home, she will be missed. Our sympathy and prayers are with you, her family, who she loved dearly. May God comfort your hearts.

Deepest sympathies to Beulah’s family. I will remember fun times at the farm.

My condolences to Paul, Suzanne and family; Doug, and Heather. I remember Beulah as a special lady who was a lot of fun on the many day trips our families took back in the day. She was a perfect foil for Lloyd, with often comic results. We still have a hand-sewn tactile fabric book she gave us when our first son was born. I understand the struggles – I still think of the loss of cheeky Peter and Lloyd, who was my dad’s best friend – and admire that she kept the faith. I’m sure you are feeling a sense of grief and relief as her life’s journey ends. Ninety years is a good turn on Earth and she used her time well. She’ll never be truly gone as long as people hold memories of the person she was and the fine life she lived.