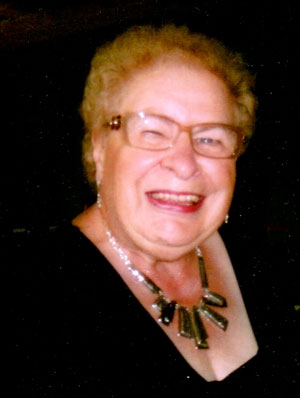 Dolores Bailey passed away at Grey Bruce Health Services, Owen Sound after a short battle with cancer on Sunday, February 21, 2021 at the age of 85.

Born October 28, 1935, Dolores was the first child of Alvin “Pat” and Lauretta Rier and was raised on the family farm on the 12th Concession of Bentinck Township, near Elmwood. She attended Howie’s School just down the road from their farm and later graduated from Chesley District High School as well as (according to her) raising her younger siblings. Dolores would go on to marry Don Bailey and they lived and farmed on the 6th of Bentinck until his death in 2007. It was here that they raised their family of five boys and ran a successful dairy and beef farm. Dolores worked along with her family milking and haying as well as feeding and clothing her family and keeping a clean house. She was an active member of the Lamlash Women’s Institute and continued to support Lamlash Hall where they held their meetings. Dolores was well known in the community and will be remembered for her hearty laugh, her love of a rowdy game of euchre and enjoying visits with neighbours and family. Due to declining mobility, Dolores moved to Valleyview apartments in Hanover in 2019 where she met new friends and was re-acquainted with some old friends and neighbours.

Dolores will be forever missed and always remembered by her five sons; Bev (Kathy) of Elmwood, Jerry (Kathy) of Desboro, Bruce (Sharon) of Tara, Monty (Marlene) of Hanover and Laurie (Shelley) of Hanover. She will also be missed by her grandchildren Bridget, Samantha, Chris, Michelle, Kyle, Kayla, Kody, Celine and Rachel as well as her great-grandchildren Shawn, Amelia, Sofia, Rylan, Emma and Chloe. Also mourning her loss are her six siblings; Jack (Maureen) Rier of Kitchener, Betty (Orval) Brown of Hanover, Ted (Bonnie) Rier of Elmwood, Sharon Johnston of Durham, Larry (Carole) Rier of Kitchener and Randy (Lynne) Rier of Hanover. She will also be missed by her many nieces, nephews, friends and neighbours. Delores was predeceased by her husband Don and her daughter Bonnie in infancy.

Many thanks to all the health care professionals and caregivers who helped us all during this difficult time.

A memorial service will be held later in the year when the weather and circumstances allow.

Memorial donations to United Way Bruce Grey or Residential Hospice of Grey Bruce (Chapman House) would be appreciated as expressions of sympathy.

So sorry to hear of Delores’ passing. She was a lovely lady and always a joy to see. The kids loved her homemade fudge at ?Halloween. Whenever we mentioned her they wanted her fudge. She will always be remembered and sadly missed but with many fond memories as a good neighbour.

I had been a neighbour of Dolores for many years. We worked together with the Lamlash Womens Institute members, and also she and I did some 4 H leadership clubs together. She was the best cake maker and I will always treasure these memories.
I will remember my last visits with her always.
My heartfelt sympathy to Bev, Jerry, Bruce, Monty and Laurie and your families. The best sons anyone could wish for. She will always be remembered

Aunt Dolores was the best! I loved going on shopping trips, sleepovers and Sunday visits. Baking, cards, caring for animals and kids were just a few of her best qualities. Thank you Aunt Dolores for the best memories. My sincere sympathy to everyone. xo

My sympathies,
she will be missed for she brought great joy to many people;
May precious memories provide comfort;
for you and all her families.

Bruce Sharon and family. So sorry for your loss

Bev, Jerry, Bruce, Monty, Laurie and families: Aunt Dolores Was Such An Amazing Person. Here Smile Laughter And Making You Feel Welcome . Always Enjoyed Our Conversation With Coffee And Goodies Every Time We Were At The Farm. She Will Be Greatly Missed. Our Deepest Condolences At This Difficult Time.

Deepest sympathies to the Bailey family. Delores’s smile could light up a room and her laughter always made everyone around her want to join her. Cherish your memories.

Bev, Jerry, Bruce, Monty, Laurie and families:
You have our deepest, sincerest sympathy. Aunt Delores contagious laugh will be missed.

Our sympathies to the entire Bailey and Rier families.

Our sincere condolences to the Bailey family

Our sincere condolences to the entire Bailey family. Our thoughts and prayers are with you.

Our sympathy to you in the loss of your mother. Our thoughts and prayers are with you

To Laurie and Shelley,
I’m so very sorry to learn of your mom’s passing. Please accept my sincere condolences.

Monty, our sincere sympathy to you and all your family on the loss of your mom!

So sorry to hear about your mom’s passing, she was a very nice friendly lady who always made you feel welcome, my thoughts are with you all at this difficult time

My sincere condolences go out to the entire Bailey family at this time of loss.

Our sincere sympathy. We were confirmed together in 1949.

To the Bailey Boys and families, please accept our sincere condolences in the loss of your wonderful mom and grandmother. Your dad will be standing and welcoming her with opened arms. RIP Dolores

Sorry to hear of the moms passing, thinking of you all at this time.

Any time I met up with Dolores we always had a good chat and I will always remember her great laugh. Our sincere condolences on your loss.

My sincere condolences as you mourn the passing of your Mom / Grandma. May your memories of her love and caring for you bring you comfort.

Michelle and family, Our thoughts are with you during this difficult time. Hold your memories close.

To Dolores’ Family
My condolences to you all on her loss. My memories of Dolores are of her laughs, the enjoyment of being with her and the pleasure of being the recipient of one of her beautiful black and white X-Border Collie puppies. What a nice lady she was.

I’m so sorry to hear of your mom’s passing. She was a big part of my life growing up on the 6th. She was a fun lady with a great laugh. Hang onto the memories!

Our thoughts and sympathy to Dolore’s Family at this time. Thinking of you Laurie

My thoughts and prayers are with you all at this sad time. She was a wonderful woman.

Kathy, Our thoughts and prayers are with you and your family at this time.

So sorry to hear about Dolores. She became a great friend with my mom at Valleyview. Paul enjoyed making the ladies giggle. Dolores will be missed. Our thoughts and prayers are with you during this time

Our deepest sympathy to all the Bailey boys and their families at this sad time. Our family will always remember Dolores fudge candy treats at Halloween.

My sincere condolences to all of the Bailey family, my thoughts are with you at this difficult time.

Sorry to hear of your mother passing.

Our sympathy to your family in the loss of a special lady.
We were close neighbours and friends for 53 years!
We will remember that “car horn”supper call among many other things.
Since retiring have truly enjoyed many coffee breaks and tail gate visit s from our lawnmowers!!!
She was a wonderful friend and will be truly missed.

Families of Delores,
So sad to hear about Delores. Her laughter and smile will shine forever in all who knew her!
She will be missed, thinking of you during this difficult time
Pam & Robert Bell

Thinking of you all as you mourn the loss of your Mom and Grandma. Will always her wonderful laugh and kind heart, lots of good memories of our Institute days together. Treasure all the memories you shared with her. Delton and Helen

Sorry to read your mom’s obituary, we have many memories of your mom and dad when we were neighbors on the 6th of Bentinck many year’s ago, but the best was when we travelled to Florida with them a long time ago now too! Lots of fun!
Cherish your memories!

Our sympathy is extended to your family. We will always remember the many laughs and good times which we shared with your mother through the Women’s Institute at the Lamlash Hall. Cherish your memories!

My sympathy to you all in your loss. Delores was a dear friend and will be missed.