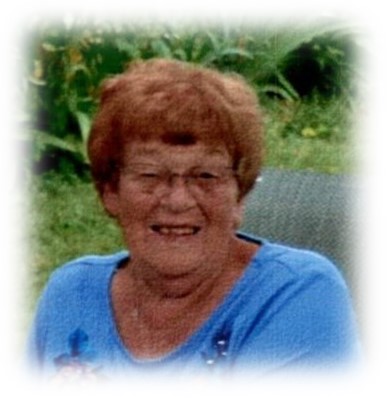 Genevieve “Gean” Frances was born on Sunday, June 7, 1942, on Bell Island in Newfoundland to parents, Moses and Margaret (Hibbs) Cummings. To say Gean was from a large family would be an understatement, as she had 17 siblings….. honestly! After completing public school Gean went on to attend St. Edward’s Academy.

Following school, Gean got a job at Waterford, a mental hospital, in St. John’s where she worked as an orderly. It was during this time that Gean began dating a man by the name of Patrick Delurey. The couple soon married and welcomed their first son, Vincent. Soon after, the family relocated to Ontario, settling in Georgetown. The Delurey family continued to grow with the arrival of Robert and Colleen. Gean kept busy caring for her young family but unfortunately, her marriage dissolved and she became a single parent. Gean returned to the workforce to provide for her family. She found work at a local convenience store, working for a gentleman by the name of Ronald Harold McAllister. In time, Ron, also recently divorced and single, asked Gean out. Her response… “No!” Ouch! But persistence paid off, and in 1970 Gean and her three young children moved into Ron’s basement apartment. She helped Ron get all the kids (his four and her three – ages 2 – 14) off to school daily. After two years of asking, Gean finally said yes, and the couple was wed on Saturday, July 20, 1974.

Once married, the family moved to Brampton where Gean worked in a variety of factories. In time, Ron started long-haul trucking, meaning Gean once again had more responsibilities at home with the children. The next move took them to Bracebridge where they remained for several years. Although a long way away from home, Gean and Ron traveled several times to the east coast, and Bell Island to visit family. In 1990, Ron and Gean moved to Chesley, eventually settling into retirement.

Gean could often be found outside, working in her gardens. She enjoyed growing a variety of vegetables and produce along with caring for her flowerbeds. It should be no surprise that roses were one of Gean’s favourites. She was also very creative and loved to try her hand at a variety of crafts. Painting was another favourite pastime as were word searches. She loved bright colours, especially yellow, and had a soft spot for daytime soaps. The Young & the Restless and Days of Our Lives were must-watch on TV! Gean liked to pick up a good magazine and appreciated a nice glass of apricot brandy with gingerale or a bottle of Baby Duck wine at Christmas. She was a big NASCAR fan, thanks to Ron, but they didn’t cheer for the same drivers. Ron loved Ricky Rudd, but Gean was a huge Jimmy Johnson fan! Gean was also a fabulous cook and helped pass on this knowledge to Mike in recent years. Her lemon pie, BBQ ribs, and Shephard pie recipes will live on through others. Pets were also a big part of Gean’s life. There were always cats and dogs around the house and most recently she shared her space with Max, Patches (the cats), and Benji (the dog). Finally, we can’t reminisce about Gean’s life without touching on her driving skills, particularly her heavy foot! I am told on more than one occasion; Gean’s passengers were rather happy to exit the vehicle after a road trip with Gean! 🙂

Gean was a kind, fun-loving woman who always looked out for others. She was a Newfie through and through and was a real character. She always liked to keep busy and loved to socialize and catch up with family and friends. Gean’s world was turned upside down in 2017 when Ron passed away after a few years of declining health. Thankfully, with the support of family and friends, particularly Mike, Gean remained independent and enjoyed the simple things in life. Together with Mike, she relocated to a farm property between Neustadt and Clifford in recent years where they enjoyed each other’s company. Sadly, Gean was diagnosed with an advanced brain tumour in mid-July. She passed away home, on Sunday, October 2, 2022, after a brief battle with cancer, she was 80 years old.

Loving mother of Rob and Colleen and their families. Beloved sister of Patricia (Maurice) Corcoran, Rosaira Mercer, Kevin Cummings an dear friend of Mickell Hill. Gean was predeceased by her son Vincent and husband Ronald McAllister.

A private celebration of Gean’s life will be held in the coming months. Inurnment in Greenwood Cemetery, Georgetown.

In lieu of flowers, memorial donations to the Canadian Cancer Society would be appreciated as expressions of sympathy.