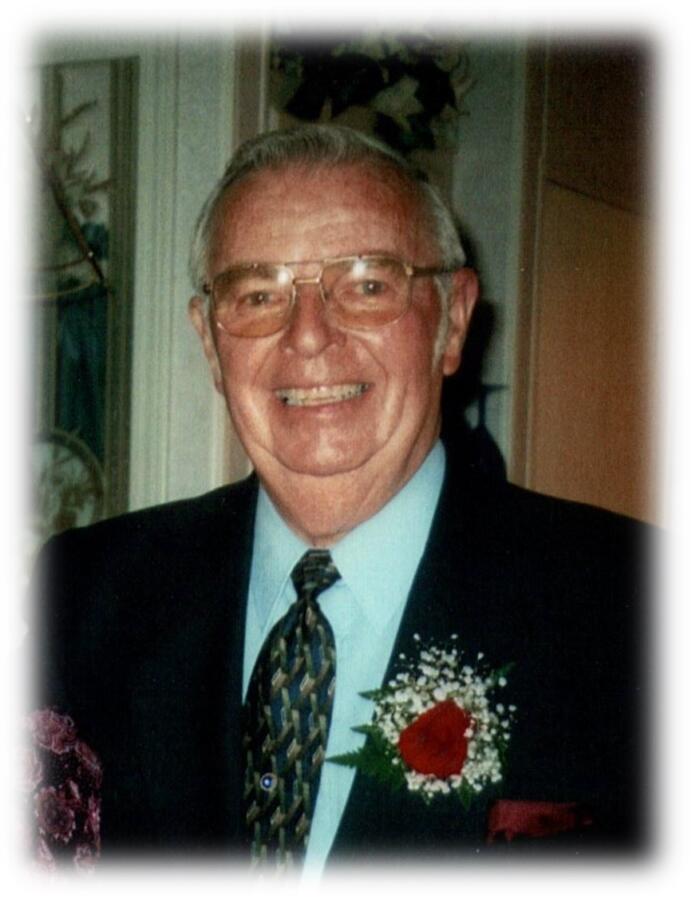 Leith Russell was born on Saturday, March 24, 1934, in Elderslie Township to parents Russell Campbell and Doreen Clara (Calhoun) Elder. He was the baby brother to sister Ruth who was seven and a half years his elder. Their parents owned and operated two hundred and twenty-five acres on the 10th of Elderslie. Leith attended S.S. #11 in Elderslie but did not pursue high school as he chose to begin working instead. There was much to do around the family farm and Leith enjoyed working with the cattle.

In the early 1950’s Leith decided to enjoy a night out and attended a bus trip to Seaforth for a hockey game. Who knew then that this experience would forever change his life. Isabelle Elizabeth Mannerow was on the same bus, as she had been asked by girlfriends to join them. As they say, the rest is history, as the young couple dated for a couple of years before being married on New Year’s Eve in 1954 at Geneva Presbyterian Church in Chesley. The newlyweds purchased a 50-acre parcel of land with a house and barn in Sullivan Township and called it home. Leith immediately began raising pigs and cattle. It was during this time that Leith was also recognized for his vocal talents. In fact, he performed at countless local weddings and grew quite the name for himself.

The Elder family began to grow with the arrival of Linda on December 11, 1955. The family was made complete a year and two minutes later (yes, you read that right) when Brad was born the following year. By this time, Leith had taken a job with Waterloo Cattlebreeding, which later became United Breeder. Being in sales, meant Leith spent much of his time on the road. In fact, he averaged 60,000 miles (or 96,000 km) every 10 months… crazy! This was also during the era when he was required to use his own vehicle for work. The Elders went through 23 vehicles in 25 years… imagine! Leith formally retired in 1996, after 40 years of service. In recognition of his dedication and longtime service, Leith received his CAAB plaque for breeding 75,000 cows over his career. Amazing!

In addition to his day job, Leith followed in his father’s footsteps and also farmed. In time they grew their operation to include farms on both the 7th and 10th of Elderslie, managing a 200 head cattle operation on 325 acres. Calves were often bought from the west and fed throughout the winter months and grassed in the summer months, before selling them in the fall. As can be expected, there was little downtime for Leith as there were always countless chores to do with Isabelle constantly working by his side. In retirement, they downsized to just grass cattle as the animals needed to be sold before their yearly trips to Florida! Like most farmers, Leith often joked that he bought high and sold low! 🙂 He had a running joke with Linda that he would continue to farm as long as she lived there. She decided to venture out and buy her own place in 2003, and Leith followed through with his promise to sell the farms. He was a very wise man, as this was months before the cattle and agriculture world was turned upside down by BSE (Mad Cow).

Unlike most farmers, Leith and Isabelle chose to live in town off the farm and therefore, bought their family home in Tara in 1958. What do think was the price tag? … $8,000, a far cry from the value you would pay today. During this period, Leith and Isabelle loved to attend local dances, and could often be seen on the dance floor in Sauble, Port Elgin, and Keady, just to name a few. Leith loved Big Band music and was quick to get up and dance when he could. They also enjoyed entertaining and hosting family and friends, whether it be in Tara or Florida. Having an anniversary on New Year’s Eve didn’t hurt either! Over the years, Leith never missed sending flowers to Isabelle on their anniversary. In fact, he ordered a rose (always red) for every year that they were married. This tradition continued until their 50th anniversary, whereby he resorted back to a dozen as to not break the bank! 🙂 They recently celebrated 67 years together, what an amazing accomplishment. When it came to hosting, Leith was an excellent bartender and always kept his guests topped up. 🙂 His drink of choice was a glass of Bacardi’s white rum, with a splash of Coke. Together, they also enjoyed cards with Euchre and Wedge being favourites. It was a known fact by everyone that where Leith was, Isabelle was too. They worked well together and played well together.

In 1960, Leith joined the Tara Rotary Club and remained the club’s longest active member. He was recognized with the Paul Harris Fellow award and awarded a plaque for his 50 years of service. Fishing was another pastime Leith enjoyed. He and Brad often went fishing in an old wooden boat on Pike Bay. He eventually traded in his old wooden boat for his new manure spreader. He then bought an aluminum boat that acted as a little cottage for him and Isabelle and they spent countless hours at the Port Elgin harbour enjoying each other’s company. Leith often entered the yearly Salmon Derby in Port Elgin, with his best catch of a 25 lb. salmon earning him a 12th place finish on one occasion. Joy did not come with just catching the fish, but also eating it, with salmon and steak (no big surprise for a beef farmer, right?) being his favourites. As previously mentioned, the Elders spent approximately thirty years wintering in their Fort Myers home. Guess what Leith paid for gas on his first trip south? $0.19 a GALLON…. crazy! They loved their years in the sunny south and enjoyed the many new friends made.

In his free time, Leith loved to read. He often had a James Patterson or John Grisham novel in hand. When not reading, Leith could often be found catching up on the news, either on the radio or television. He also passed time watching a variety of documentaries. Most of you know Leith was a little particular when it came to his cars! 🙂 They always looked immaculate inside and out and nothing was ever out of place. This also held true for his personal appearance. He was always cleanly shaven, with hair neatly cut (sometimes weekly) and styled just right. This same attention to detail applied to his clothes . He was always dressed to the nines. To top it all off, he was known for his wry sense of humour and wonderful smiles. These along with many more admirable traits will be dearly missed.

In 2014, the Elders made the hard decision to downsize and sell their family home. They moved north (less than a kilometre) and settled in the newly built Brook St. development. Sadly, by this time Leith’s Parkinsons greatly affected his day-to-day life and this move was good for everyone. Here they supported one another and made the best of their remaining years together. Leith enjoyed visits from his children, grandchildren, and great-grandchildren. He treasured the visits and time spent with the younger generations. In November of 2021, they made their final move to Owen Sound and Kelso Villa, where they could receive more care and support. They were inseparable and remained together until Leith’s final days when a fall caused him to break his hip. Sadly, his body couldn’t endure the surgery to repair it and he passed away at Grey Bruce Health Services, Owen Sound on Wednesday, February 23, 2022, in his 88th year.

Beloved husband of Isabelle (Mannerow). Loving father of Linda Elder of R.R. #2 Kincardine and Brad (Corlette) of Exeter. Cherished grandfather of Chantelle (James) Linton of Belle River, Travis (Tiffany) of Exeter, Troy (Hannah) of Lucan, and great-grandfather of Lexi, Addison, and Auston. Leith will be fondly remembered by sister Ruth’s family, Doug Fischer and Pat Luckhart and families, the entire Mannerow family as well as his many dear friends. He was predeceased by his sister Ruth Kennedy and his parents Russell and Doreen (Calhoun) Elder.

Visitation will be held at Rhody Family Funeral Home, Chesley on Friday, March 4, 2022, from 1 p.m. until the time of the funeral service at 3 p.m. All are welcome to the visitation and the funeral service! Masks are mandatory. Spring interment in Chesley Cemetery.

In lieu of flowers, memorial donations to the Tara Rotary Club or Chesley Hospital Foundation would be appreciated as expressions of sympathy.