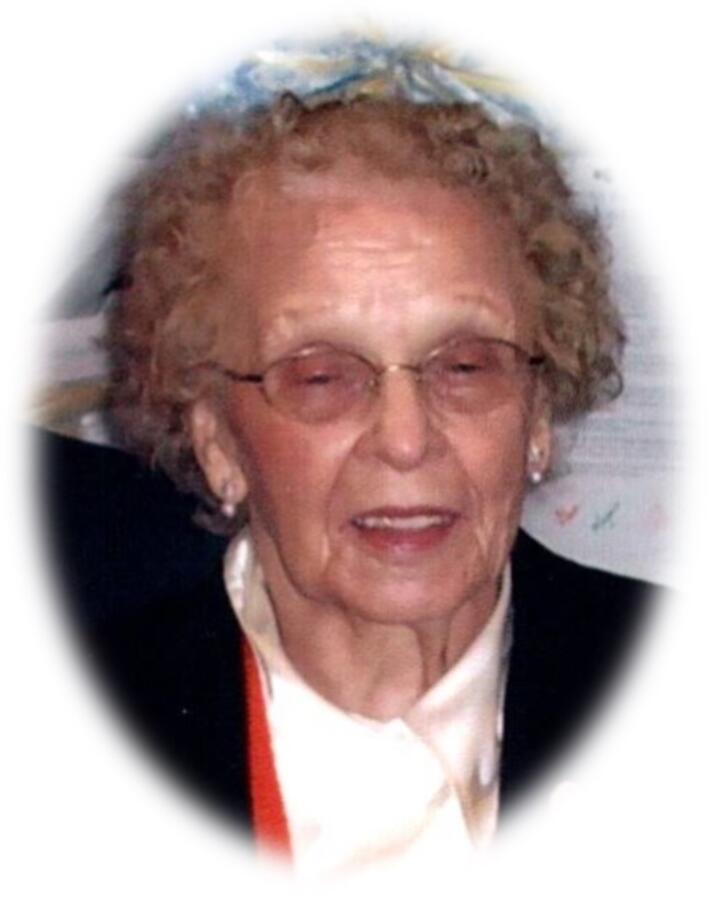 Evelyn Marjorie Schopf was born on Monday, January 26, 1920, in Dobbinton to parents Henry and Caroline (Gobert) Schopf. She was the youngest of four, joining older siblings Agnes, Earl, and Lawrence. Growing up, their family lived on a mixed farm east of Dobbinton. The children’s spinster Aunt Annie Gobert lived with them.

All the Schopf children attended the Dobbinton school that was originally located on the northeast Dobbinton corner, and the family attended the Marmion Lutheran Church. Marjorie really wanted to become a teacher and remembered in great detail how she learned to print and read, so that she, in turn, would be able to teach others. One of her best accomplishments was the ability to recite a poem from memory, by Cecil Francis Alexander entitled “The Burial of Moses.”

When Marjorie was growing up, she found a passion for sewing as she would assist her mother making clothes for her family. Her mother suffered with severe arthritis and therefore Marjorie learned at a very young age how to help dress her mother making dresses that were adaptive for her. She taught herself how to cut out and sew dresses for her mother from her own patterns. Marjorie quickly became an accomplished seamstress and always made blouses, dresses, and coats for herself throughout her lifetime.

Marjorie met a young man by the name of Clifford Teschke, and they later married. Together, they adopted Paul in the late 1950’s and later Helen in 1960. They lived on a dairy farm outside of Desboro, south of Marmion. Aunt Annie moved in with them in 1957 shortly after Marjorie’s mother died.  Marjorie would go out to help with the chores that needed to be done, assisting in the fields in the summer, and milking the cows all year long. She enjoyed life on the farm and getting to be around the cows, as she loved animals, especially her cats. Her and Cliff were known for their interest in music and dancing, winning many dancing competitions. In 1970, Marjorie and Cliff went their separate ways, and Marjorie and Helen moved to an apartment in Galt. When Helen moved out, Marjorie moved to Hanover to be closer to family and friends. At this time, she began working at Sklar-Peppler Furniture working in the warehouse. Just before she retired, a man by the name of Jim Long caught her eye. They started dating and were married not long after.

Marjorie soon moved in with Jim in his home in Owen Sound where they lived a very peaceful life. Unfortunately, Jim passed away ten years later. Not long after Jim passed, she ran into an old friend and classmate from her younger days by the name of Carl Teschke. The two rekindled their friendship which turned into a loving bond, and they were married on November 30, 1997. In the years following they enjoyed a great relationship, supporting one another in the good and bad. However, all good things must come to an end! Sadly, Marjorie’s life forever changed in 2014 when she experienced the losses of both her son Paul in July and then Carl in August. This was heartbreaking for Marjorie and truly one of the most difficult time periods in her life.

In her youth, Marjorie was a proud leader of 4-H, teaching children sewing and cooking skills. On top of her love for sewing, she also enjoyed knitting. Marjorie was an amazing cook, and I am told she made a Christmas dinner and homemade potato pancakes like no other! She loved baking, making everything from cookies, cake, pies, and bread to many more tasty treats! Marjorie enjoyed listening to country/western music, with Johnny Cash, Charley Pride and Elvis Presley’s Gospel music being some of her favourites. She was musically gifted herself, playing the fiddle in her younger days, and continuing to play the harmonica most of her life. Marjorie was a great gardener, enjoying a huge garden and wonderful flowers up into her 90’s. She grew dahlias from seed and planted them in her front window boxes. She maintained her own property both summer and winter. She pruned her own shrubs and trees (with a chainsaw) and shoveled snow for many years.  She was a great housekeeper, often getting up at 5:30 a.m. to do her vacuuming!!

Marjorie was indeed a strong-willed character! Telemarketers didn’t stand a chance! At family reunions in the 1960’s, she was in full control. She would approach a group of young kids and inform them that they were going to be the next “entertainment” in about 15 minutes, and better know the words to sing “Henry the Eighth!” She would go on to another group and give them their song to sing. Immediately after the singing, she rounded the children up for the “three legged” and “wheelbarrow” races.  Nobody argued, they just did as they were told! She was very close with her family and was so honoured when her sister Agnes named her daughter Ruth’s middle name Marjorie, after her, and Lawrence’s daughter Carol Anne being born on her birthday in 1955.

Marjorie was a proud member of the Faith Lutheran Church in Desboro. She attended services each week, until she was no longer able to attend due to her health. She would take her family to church and was a member of the ladies’ auxiliary. Marjorie enjoyed the community and friendships that she built throughout her help with the church. Marjorie was the best mom to her son Paul and daughter Helen, and was so proud of all of her grandchildren, great grandchildren, and great-great grandchildren. She loved them all and was so honoured to be a part of their life. She was so caring and helpful to everyone in her family.

Marjorie was able to stay in her home until April 2021, when she moved into Hannah Walker Place in Owen Sound after she took a fall. Pretty incredible to stay in her own home until she was 101 years old!! She maintained a healthy and active lifestyle throughout her life. Sadly, her health declined in recent days, and she passed on Sunday, March 27, 2022, at Hannah Walker Place at the age of 102.

Loving mother of Helen Hetsler and her husband Russel. Cherished grandmother of 3 grandchildren, 7 great grandchildren, and 1 great great granddaughter. She will be remembered by her many nieces and nephews. Sister-in-law of Earl Teskey.

In lieu of flowers, donations to the Faith Lutheran Church would be appreciated by the family.