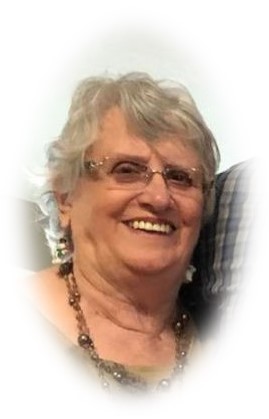 Pamela Elizabeth was born November 11, 1940 to Clarence Chester and Irene Elizabeth (Kilby) Skinner in Little Downham, England. She was an only child. Pam attended a village school until she was ten and a half years of age. She then attended a girls’ school in Ely until the age of fifteen. It was a difficult time for Pam as she found the school too posh!

In 1959 Pam married Selwyn King and they lived in a townhouse in Little Downham. From 1955 until 1960, Pam worked in accounting at Grey’s Gas Station in Ely. The company managed school buses, taxis and limousines. In 1964 they welcomed their son Andrew and a couple of years later, in 1966, they immigrated to Canada. Luckily, Pam and Andrew flew into Toronto and settled in the west end of the city. Selwyn had gone ahead three months before and in time began work with IBM. In 1966 Pam began working at The Robert Simpson Company Limited, a department store which eventually morphed into Simpson Sears. The King family moved to Bramalea in 1972 with her and Selwyn going their separate ways in 1979.

Pam continued to work in bookkeeping in the years that followed. In 1988, Pam was introduced to Wolfgang Weddig in Bramalea, through their children. They married on March 30, 1990 and soon moved to a home just outside of Huntsville, on Clear Lake, from 1989 until 1997. While living in the Huntsville area, Pam continued to keep busy by cleaning houses and spending some time working in a Health Food Store. What an education. The two of them downsized in 1997 and moved into town where they lived until 2013. It was then that they moved to Chesley to be closer to family.

Pam liked to collect Royal Dalton figurines and knit. She originally liked the colour green but then it changed to yellow. Perhaps this is why she loved the spring season with all of its beautiful spring flowers and sitting with Wolf watching nature. She also loved and had a great appreciation for butterflies. Pam loved her vegetable lasagna, with her drink of choice being a Manhattan. She was a wonderful cook. Pam loved taking cruises with Wolf, and she was also an avid cat lover, with her cat Millie being one of her favourites. She was an avid supporter of the arts. Watching Good Morning America, NCIS and Downton Abbey on TV were favourite pastimes. Like Wolfgang, she loved to read Stuart Woods and had read fifty-four of these detective stories, some of them on the IPAD. As a teenager, Pam loved to listen to Johnnie Ray, the American jazz singer, songwriter, and pianist for most of the 1950s who was responsible for what would become rock and roll. In later years she learned to love Country and Western music.

Pam loved to travel to B.C. to meet up with her childhood friend Pat. In fact, she had been there five times, even celebrating their 60th birthdays together. Words that best described her were loving and caring. Her maternal grandfather, John Kilby, was the most influential person in her life. Pam was very proud of her British Heritage. Despite a poor upbringing, Pam was able to make something of herself. Despite having cancer four times, Pam was a survivor! Pam made the most of everything that was handed to her in her life. Her family and her friends were the strength she needed to get through the tough times. Wolf was her biggest supporter and they truly had a love that taught everyone what true love looked like, no matter the age of when they found each other. With a blended family, she treated every single one of Wolf’s kids like her own. When their grandchildren were born, Pam learned a new meaning of love. She cherished her relationship with them, and they all loved Pam. Pam was excited when she found out about the arrival of what would have been her first great grandchild in October of 2022. Sadly, Pam passed away suddenly at South Bruce Grey Health Centre, Chesley, on Thursday, September 1, 2022 in her 82nd year.

A private family inurnment will be held in the Hanover Columbarium.

As expressions of sympathy, donations to the Canadian Cancer Society would be appreciated by the family.